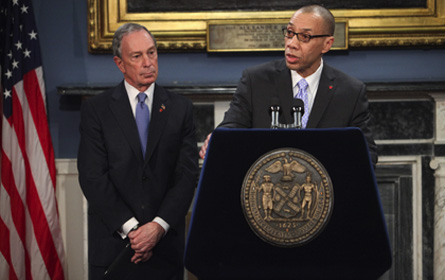 In a stunning reversal and a glaring miscalculation in the Bloomberg administration's third term, Schools Chancellor Cathie Black stepped down Thursday just three months after she took the reins of the nation's largest public school system.

In a somber and humbling press conference at City Hall, Mayor Michael Bloomberg appointed Deputy Mayor Dennis Walcott, who has overseen educational policy for the mayor since 2002, as her replacement.

Bloomberg said he had met with Black early Thursday, and the two "mutually agreed" she should step down. The move came just one day after a deputy chancellor resigned -- the latest in a string of top educational officials to leave the department during Black's tenure. It also followed a Marist/NY1 poll this week that put the former chancellor's approval rating hovering at 17 percent.

Bloomberg took responsibility for Black's failure -- a rare moment of defeat for a mayor who typically balks at admitting errors in judgment. At the same time, Bloomberg thanked and praised Black, the former chairwoman of Hearst Magazines.

"I take full responsibility that this has not worked out," Bloomberg said. "I have nothing but respect and admiration for her," he said of Black.

Black's short tenure was mired by embarrassing gaffes and political unpopularity. Her replacement comes at a crucial time for the Department of Education.

The department faces losing more than 6,000 teachers thanks to budget cuts. Simultaneously, the Bloomberg administration is attempting to convince the State Legislature to repeal the city's last in, first out policy -- which requires layoffs based on seniority.

Given the upheaval, city and state officials question whether the administration will be able to get its policy priorities, like LIFO, accomplished even with Walcott's good reputation in and outside of the Tweed Courthouse.

Walcott is no Black.

While Black was often criticized for her lack of teaching experience, Walcott's appointment has already received a warmer reception. The deputy mayor has taught kindergarten and served as an adjunct professor at York College. He also sat on the old Board of Education.

Before joining the administration in 2002, Walcott was the president and chief executive officer of the New York Urban League for more than a dozen years.

While Black sent her kids to boarding school in Connecticut, Walcott's four children were all educated in New York City public schools. He too is a product of the city's school system.

At City Hall on Thursday, both Bloomberg and Walcott were quick to list off the deputy mayor's resume. After bumping fists with the mayor, Walcott confidently took over the podium, describing himself as "just a guy from Queens."

Unlike Black, who was asked whether she had set foot in a public school before she became chancellor, Walcott said he has visited "hundreds" of classrooms across the city.

To add to the dramatics of the day, the administration's press conference was flooded by students from P.S. 10 in Brooklyn, who Walcott said he was committed to helping succeed. The deputy mayor promised to visit them and make them waffles next week.

Despite his experience, Walcott, like Black, will need a waiver from the state in order to serve as chancellor. State law requires the schools chancellor to have a master's degree, a certain amount of teacher experience and graduate courses.

Walcott has a master's degree in education and in social work. Bloomberg said Thursday he didn't anticipate the waiver proces would cause a problem.

When Bloomberg first arrived at City Hall, he laid his legacy down on the city's public schools. He quickly acquired the pseudonym: "The Education Mayor."

"Under mayoral control the mayor's in charge," said Councilmember Robert Jackson, who chairs the body's Education Committee and is supportive of Walcott's appointment. "Not the chancellor or anyone else."

For that reason, officials and advocates don't expect a dramatic shift in policy at Tweed.

Nonetheless, the Black debacle has tainted Bloomberg's educational legacy. Some experts question whether the last three months will curtail the mayor's ability to accomplish his policy agenda over the next two years.

"If anything, Bloomberg is weakened by this," said David Bloomfield, the chair of the education department at the College of Staten Island. "His judgment has been severely called into question."

Nowhere could that have more of an impact than on the mayor's pursuit of the repeal of LIFO . While the State Senate has approved legislation that would give the mayor the authority to layoff teachers based on merit, the State Assembly has balked at the proposal.

"I would be surprised if this indicated any change in the status of where things would go legislatively for the mayor," said Billy Easton of the Alliance for Quality Education.

On the other hand, because Black's appointment was so contentious, some state officials said Thursday Walcott would have an easier time getting Albany officials to sit down. But that doesn't mean they will listen.

"To some extent, his personality might be more suitable," said State Sen. Bill Perkins, who is a frequent critic of Bloomberg's educational policy, of Walcott. "He's been around. He knows a lot of individuals. Maybe our policy differences may not come with so much antagonism."