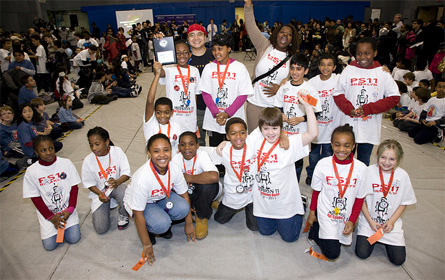 Photo by Pratt Area Community Council
Many parents who don't live in the area zoned for P.S. 11 take unusual steps so their children can attend the Clinton Hill school.

Kelley Williams-Bolar and Tanya McDowell, the two mothers prosecuted this year for sending their children to out-of-district public schools, have plenty of company in New York City. Public school parents here have long relied on lax school policies and the generosity of friends to help them bend the city’s rules and land their children in desirable schools.

For parents in District 13, which spans Fort Greene, Clinton Hill, and Brooklyn Heights and includes parts of Park Slope and Bedford-Stuyvesant, the Williams-Bolar case underscored an age-old debate over school choice. That conversation has focused mainly on a question of stay, or stray: Should parents stick to their zoned schools and help to improve them where they are lacking, or should they exploit all feasible options to get a seat in the ideal school?

Ms. Jones (her name has been changed to protect her identity), a long-time Clinton Hill resident and parent, ascribes to the latter philosophy. Over the years Jones has added fellow parents, generally from Bedford-Stuyvesant, to her lease and utility records so their children can attend P.S. 11, a highly desired elementary school in the neighborhood.

"If I even told you how many parents I have on my address, you would be shocked," said the mother of two.

Jones understands that she's taking a risk by fudging these documents, but her priorities are clear.

"The law is the law, but our children come first," she said.

Parents who favor school choice avidly defend their right to make their own decisions about their children's education, and many consider out-of-zone schools as reasonable an option as any other. The paperwork is merely a formality.

Over the past several years, the city Department of Education has sought to expand the choices available to elementary school parents. High-scoring youngsters can choose from a spread of magnet schools, with "gifted and talented" programs for those who meet the requirements and the deadline. For other students, the administration repeatedly states that its push to expand the number of charter schools in the city is part of its effort to offer more choices.

But many New York City parents still feel stifled by their local options. Their children may not qualify for the gifted programs, or the neighborhood may not offer one due to a low number of children qualifying. Some areas don't have any charter schools, and in those that do, competition for a space is fierce. And the problems can be more abstract. In both local zoned and charter schools, everything from curricula, to disciplinary styles to school hours and dismissal procedure can create a school culture that certain parents reject. They may view a school outside their district as more in keeping with their attitudes.

These frustrated parents feel that the choices touted by the Department of Education do not offer them or their children an equal opportunity sort: Options are one thing, but access to them is quite another.

Ms. Lawrence (also not her real name), a Clinton Hill mother who used a friend's address to enroll her son in P.S. 11, said she felt guilty about lying, but considered it her only option. Her local school was considered sub-par, she said, and she couldn't stomach the thought of missing out on a better option.

"You really do get caught up in this hysteria, and you feel like all your chances will be ruined if you don't get in where you want to be," she said. "The quality of schools is so unfair in New York that parents really feel like they have to do this."

Attending play dates at the homes of P.S. 11 she came away with the clear impression that hers was not the only family cheating the system; some of the other children's homes, too, were outside the school's zone. But, she said, "It's definitely not talked about."

Leidy Diaz, a Bedford-Stuyvesant mother, was zoned for P.S. 3, a middle-of-the-pack elementary school on Jefferson Avenue. She was less concerned with her daughter's academic prospects than the route she would walk to and from school -- a walk that would take her daughter past a busy train stop on Fulton Street, a site sometimes abuzz with teenagers and adults shouting, swearing and drinking, Diaz said.

Meanwhile, the family lived only a few blocks from the better-rated P.S. 56 located on a residential street in Clinton Hill. Diaz wanted her daughter to attend that school, so she took matters into her own hands.

To enroll her daughter in P.S. 56, Diaz had to provide a lease and an electric bill, both of which her friend amended to include Diaz as a tenant. When the shared address sparked suspicion, Diaz's friend visited the school to confirm the documents' validity.

"She had to go with me in order for them to really take my word for it," Diaz said of the leaseholder.

Easy enough. In fact, the process was so easy and the practice so widespread among her friends and acquaintances, that it never occurred to Diaz to fear punishment for falsifying her daughter's records. She was shocked to hear that Williams-Bolar, an Ohio mother, was convicted of a felony and served nine days in prison for faking records to allow her two daughters to attend a better school.

"I never thought about the fact that they could do something if they found out that I was lying," Diaz said. "I never heard of the Department of Education taking action against someone that lied about their address."

But the Department of Education has taken action before. One of the most public cases involved Lee McCaskill, the former principal of Brooklyn Technical High School who was investigated by the department for sending his daughter to a Brooklyn public school when the family lived in New Jersey. McCaskill resigned days before the investigation could be completed, but reached a settlement with the city in which he agreed to pay $19,441 for four years of tuition.

Transgressions within the city or state don't generally have such a high price tag. In those cases, students found ineligible for enrollment are transferred to their zoned school, according to the city's regulations.

"Our goal is to make this process easy and accessible for the vast majority of families providing true information, but to create barriers and requirements for the small handful that try to cheat the system," said Department of Education spokesperson Jack Zarin-Rosenfeld.

"When you have a zoned school that's really popular, the families and children in those zones have first rights to those schools," Zarin-Rosenfeld said. "It wouldn't be right for someone to lie about their address in order to access those seats."

When suspicion arises about a student's address, the rules state, responsibility falls on the individual school to investigate, and not on the Department of Education.

Pamela Wheaton, a project director for the popular reference website Insideschools.com, said that such investigations are highly uncommon in most parts of New York; they happen almost exclusively at a few highly competitive schools in Manhattan. In those case, investigator "go to your listed apartment and check to see if you have toys there, if you're living there,"Wheaton said. "They ask the doorman."

Despite the potential consequences, parents who have lied on leases said they would do the same all over again.

"I'll do anything to get my daughter in the school where I want her to be," said Diaz. "If I have to lie again, I'll lie again. I don't feel embarrassed about that."

And Ms. Jones will continue to usher parents into her neighborhood school by way of her own home.

"Ultimately, we are not loyal to the principals or to our schools," Jones said. "We are loyal to our children. It's about giving them a choice."</P