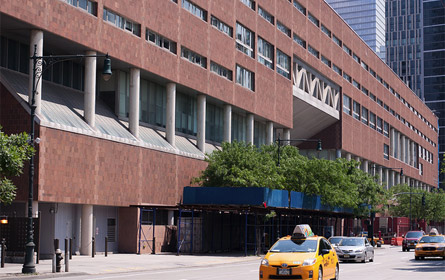 Photo by Aloucha
Many students and faculty at Borough of Manhattan Community College worry that plans to hike tuition there by $300 a year could make the school too costly for some people.

"Yeah, I know a few," said Louis Di Meglio, a former undergraduate and now graduate student at Brooklyn College. Without much pause he began talking about a fraternity brother who may need to drop out next year and another friend who had to delay her graduation because it was, as Di Meglio put it, "between her tuition and her brother's."

He spoke casually, and with graduation rates under 50 percent for most schools in the City University of New York, dropping out is common. Regardless of who one talks to -- a student, professor, sports coach or administrator -- chances are he or she knows at least one person who has left school without receiving a degree. And while the causes are many, chances are they will name money as the main reason. "I had a student who dropped out because her parents said it was going to be better if she worked in [the family] restaurant than if she went to school. They couldn’t afford it," said Kathleen Offenholley, an assistant professor of mathematics at Borough of Manhattan Community College. "She was getting straight A's. And I cried."

Now finances are likely to get even tighter for CUNY students. The state legislature approved a bill in July that authorized a tuition increase of $300 every year for the next five years, a plan expected to raise $50 million. With "the long-term trend in state support for higher education ... down for the last 40 years," Terry W. Hartle, senior vice president at the American Council of Education, has called it "an extraordinarily important step" for CUNY.

But the legislation poses a catch-22 for students. While they hope more revenue will reduce ballooning class sizes, save school programs and enable CUNY to hire more full-time faculty, for many students studying at a CUNY school, paying more could mean not attending at all.

CUNY was founded in 1847 with the mission of making higher education accessible for New York residents, and until 1975 did not charge tuition. Almost 165 years later, CUNY continues to reflect its original mission: 54 percent of its student body lives in a household with an income of less than $30,000 a year; 74 percent are people of color; 44 percent are first-generation college students; and 47 percent work full or part time in addition to attending school.

The legislation follows a series of tuition increases at CUNY, beginning with a 15 percent increase in 2009. Two years later students faced another 5 percent increase effective spring 2011 and then a 2 percent hike for the fall 2011 semester. This brought CUNY tuition for full-time, in-state undergraduates to $4,920 at senior colleges and $3,360 at community colleges. Now, with five more years of tuition increases, higher education could become farther out of reach for New York's poorest students.

"Many [CUNY students] hold a full-time job while also going to school full-time. They are at their maximum stress point in terms of finances, and even $300 can be extremely prohibitive," said Barbara Bowen, president of the Professional Staff Congress-CUNY, the union for CUNY faculty and staff.

"I have students, some of whom are living in shelters, who qualify for food stamps," said Francesco Crocco, an assistant professor of English at BMCC. "We're throwing the burden of public education on the people who are least able to pay."

The impact on CUNY's six community colleges may perhaps be the most significant. With lower costs, increased flexibility and an emphasis on vocational training, two-year community colleges are a "pathway out of poverty," according to the Center for an Urban Future. But with higher tuition, a critical avenue into the middle class may become out of reach for an increasing number of New York's young people.

In a series of rallies in May many CUNY student spoke out against continuing budget slashes, tuition hikes and, on a broader note, what they see as an increasingly inaccessible education system.

"Public education is under attack right now in the sense that it's headed toward privatization," said Domingo Estevez, a student at BMCC entering his third semester. "It's going from a right to a privilege."

A Cure for CUNY?

Many members of the New York State Assembly, however, hail the legislation as a resounding success. Speaker Sheldon Silver and Deborah Glick, chair of the higher education committee, have championed it as a means to bring stability to CUNY tuition.

"While it is unfortunate that tuition must be increased during these difficult economic times, this predictable tuition plan provides students and families the opportunity to plan for the costs of higher education," Silver said on June 24.

CUNY Chancellor Matthew Goldstein originally conceived of the plan as a means to reduce the university system's reliance on outside funding.

"In an era when public support for public higher education is hemorrhaging, New York state has provided predictability. â€¦ It's a bold move that will pay dividends for years to come. This is good for institutions, it's good for the families, and it's good for the state," Goldstein said in a press statement after the legislature approved the measure.

To address affordability, the legislation created a tuition credit to be provided by CUNY for in-state financial aid students whose tuition costs exceed the $5,000 ceiling set by the Tuition Assistance Program, or TAP, New York state's financial aid grant program. The plan hopes aid this will enable aid to keep up with the increase in tuition. Students who received the maximum TAP award, would receive $5,300 after the $300 tuition hike -- with the extra $300 offset by CUNY. A student who received a $2,500 TAP award would receive $2,650 -- or $150 in tuition credit â€“ after the increase.

'Falling Through the Cracks'

This provision, however, has not done much to dispel concerns for Estevez. Two of his acquaintances dropped out last year because they couldn't afford CUNY's 2010 tuition hikes.

"Financial aid is there, but not everybody qualifies for it. There are a lot of people being left out," he said.

According to Bowen, those most likely to be left out are part-time students, who must take a certain number of class credits to qualify, and students who technically are still their parents' dependent but do not receive financial support from their family. For students whose families make just above the $80,000 income ceiling for TAP, tuition increases could also prove overwhelming.

"Thousands of students already fall through the cracks in TAP, and many others may be discouraged from entering college by the escalating cost," Bowen said.

But students may not be the only ones dissatisfied with the new tuition credits. While the state pays for TAP, CUNY will have to cover the credits. This will force CUNY to funnel some of the money it gains from higher tuition into financial aid. With CUNY serving some of New York's poorest students, this could prove a substantial figure.

"If we need to increase tuition and then increase the amount we're giving in financial aid, I'm not sure what we're getting," said Cory Provost, chair of the CUNY Student Senate.

Goldstein, however, has remained optimistic, claiming that even after the tuition credits there will still be substantial revenue to invest in CUNY education.

The tuition increase comes in amid deep federal, state and city cuts to financial aid programs. Many of the safety nets college students relied on to finance their educations simply are no longer available.

On the federal level, the Pell Grant program, considered the pillar of the nation's financial aid to low-income undergraduate students, has come under a series of attacks. Potentially devastating cuts -- including a budget resolution passed in the House of Representatives this February that would have slashed the current maximum award of $5,550 by over $2,000 -- have largely been avoided. But with shaky economic times, the Pell Grant program is on a very uncertain footing.

While funding was secured for the 2011-2012 academic year in this month's debt agreement, the Pell program remains unpopular among many Tea Party Republicans, such as Rep. Denny Rehberg, a Montana Republican who called it "the welfare of the 21st century." Any cuts will be amplified by the fact that funding for the program over the past two decades has not nearly kept up with the ballooning costs of attending college.

Other federal programs have fared even poorly. This year the government eliminated the Academic Competitiveness Grant, the Science and Mathematics Access to Retain Talent Grant and the Leveraging Educational Assistance Partnership program.

State funding has also been spiraling downward for the last 40 years. An indicative example is the Search for Education, Elevation and Knowledge, or SEEK, program. The program, funded by New York state, supports disadvantaged students at CUNY through counseling, specialized academic courses, tutoring and limited financial aid. But SEEK, like College Discovery, Higher Education Opportunity Program, and a slew of other state programs, has for over 20 years seen its funding significantly outpaced by inflation. According to the 2008 state Commission on Higher Education Final Report, in real terms SEEK has faced a 19 percent reduction since 1994.

On the city level, this year's budget was set to slash a range of CUNY programs. While funding was at least partially restored for programs like the Black Male Initiative, the Hunter-Bellevue School of Nursing, and the Dominican Studies Institute, funding for the Peter Vallone Scholarship was not. The scholarship, which did not consider U.S. citizenship in student eligibility, was a major assistance for the more than 2,500 undocumented immigrants at CUNY schools. The scholarship was awarded to 14,000 students each year.

There is, however, a silver lining. In light of tuition increases, the state government has agreed not to cut CUNY funding for the next five years unless facing the state faces a fiscal crisis. The city has made a similar pledge.

"The city is obligated to maintain the same budget [for CUNY schools] as last year or more," said Rodriguez. "For the first time the city made the commitment to bring responsibility, to put in the same amount of money."

But the budget crunch is far from over. According to Bowen, many CUNY schools lack the resources to provide "serious education." The consequences of decreased public funding have been overcrowded class sizes, out of date lab equipment, a shortage of computers and an overloaded faculty, she said.

"At a certain point it imperils the quality of education for the students," she said.

It seems likely that CUNY students will bear the burden of an ailing school system. And with scholarship and grant programs facing the ax, many worry that tuition could become a massive hurdle for accessibility in higher education.

"For my students, they can barely manage and here we are, in effect not giving them the opportunity they could have," said Offenholley from BMCC. 'We’re basically trying to fix New York City by taxing poor people more, by charging them more tuition. It's sad. It's wrong."