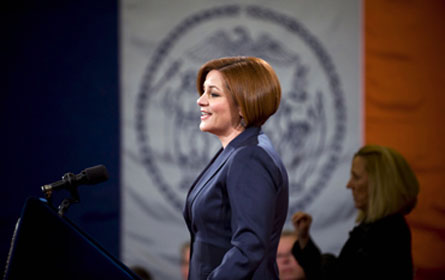 City Council Speaker Christine Quinn focused on education and jobs in her State of the City speech, which was widely seen as an outline of her mayoral campaign.

Quinn was a close ally of Mayor Bloomberg in the past and in January, she was one the only one of the four prospective mayoral candidates who did not criticize his education policy on which he stakes his legacy.

But on Thursday, she sought to distance herself from the mayor by outlining her plan for integrating teachers, community agencies and parents to provide a single experience for a child "a single journey from cradle to career." A pilot program will soon launch in District 30 in Queens.

She also wants to make kindergarten mandatory, extend loans to parents to help them pay for child support authorize $71 million more in funding to the CUNY system and increase after-school programs, which are usually high on Bloomberg's budgetary chopping block.

"Would you create a dozen separate agencies to oversee different parts of a child’s life? Would you have government officials working in a vacuum?" Quinn asked. "Or would you build a system that recognizes and respects the role the whole community plays in educating our kids?"

Bloomberg clashed repeatedly against the large United Federation of Teachers union over closing schools, firing teachers and making tenure harder to get. He also rearranged education administration in the city to resemble corporate leadership, giving great leeway to the School Chancellors to act as they saw fit. As he leaves his post, the education question will be on the minds of teachers and parents.

In contrast with Bloomberg's top down style of governing, Quinn tried to cast herself as a receptive grass roots organizer who works with everyone.

“Now more than ever, we need to tap into the power of our communities,” said Quinn.

The speaker avoided criticizing anyone despite her statements a week ago taking Police Commissioner Raymond Kelly to task for the department's stop and frisk practices, which, critics say, disproportionately target minorities.

During her speech, she praised Kelly for making the city safer and also touted the Youth SHIELD program under which community leaders would coordinate with the task force on gun control to fix up areas which invite crime. The program will run with the help of the council's Task Force to Combat Gun Violence headed by councilman Jumaane Williams, a frequent Kelly critic.

Quinn also dedicated a large part of her speech to jobs. Even though New York City did better than the country in regaining jobs lost during the recession, employment remains a major concern for many New Yorkers. Income inequality is especially visible in New York City, home of Wall Street and birthplace of the Occupy movement, which Quinn referenced multiple times in her earlier fall speeches. She offered several ideas, both large and small.

Following Fashion Week's example, the speaker said that she is working on a Design Week that would showcase the work of the city’s 40,000 designers of all stripes, to attract visitors and employers. She also talked about investment in tech companies in DUMBO, the Brooklyn Navy Yard and Downtown Brooklyn.

On a more local scale, Quinn said that the city will work with Kickstarter, an online fundraising platform to help raise capital for small businesses. Through Kickstarter, people can describe their project and solicit donations from the internet at large until they can meet their goal. Most Kickstarter projects are small but recently, an independent game production firm managed to raise $1.74 million.

The speaker praised Assemblyman Keith Wright’s and State Senator Andrea Stewart-Cousin’s 2011 bills that would prevent employers from discriminating against unemployed jobseekers and said that she would work to duplicate the process in the city. “We won’t wait for Albany,” she said.

Quinn also said that she’s looking out for freelancers, who comprise 30 percent of the workforce, by helping the Freelancers Union open a clinic to offer cheap treatments to members.

Taking a page from her past as a housing advocate, Quinn said that she wants to extend the duration of house affordability from 30 years to 60 and then, indefinitely. She also promised to crack down on bad landlords, prevent them from flipping properties and making them fix the source of any apartment problem.

She also addressed homelessness, an area in which Mayor Bloomberg does not have high marks among homeless advocacy groups. Quinn proposed shifting resources towards subsidized housing units for homeless families which cost $800 per month compared to the $3,000 it takes to keep that family in a shelter.

Throughout her speech, Quinn repeatedly emphasized her focus on communities, sometimes with sentimental imagery of immigrant women pulling together and thriving. She positioned herself as an inclusive, bottom-up leader.

Quinn's rivals were generally positive about her speech with De Blasio saying that she had some good ideas. Stringer said she had a "solid" speech while Liu said the speech was "comprehensive and cogently delivered."

De Blasio and Liu are due offer their own state of the city addresses this week.