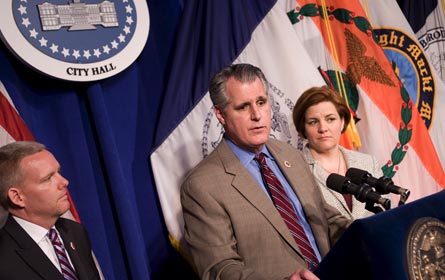 The City Council today passed legislation requiring an analysis of the city’s water supply as a potential source for hydroelectric power.

The analysis will be conducted by the city’s Department of Environmental Protection and will take 18 months to complete, said Council member James Gennaro, who chairs the Committee on Environmental Protection. City officials hope that generating hydroelectric power would help the city reach its goal of reducing carbon emissions by 30 percent by 2030. That reduction would be the equivalent of the entire carbon footprint of Oakland, California, Council Speaker Christine Quinn said.

“This is a first-in-the-nation type of bill,” said Council member Gennaro. “All of the people involved in this kind of technology across the country are looking at what the results of this study are going to be.”

The city’s water supply, wastewater treatment facilities and natural waterways will all be evaluated as possible sources of hydroelectric power. The economic feasibility of hydroelectric projects at specific sites will also be assessed and delivered to the Mayor’s office and the City Council after the study is completed.

The council passed the bill (Intro 534-A) authorizing the hydroelectric assessment unanimously.

Council Speaker Christine Quinn said New York City is “behind the tide” in hydroelectric power, especially given the city’s large water supply and natural waterways. Other cities, she said, are already generating a significant portion of their energy from hydroelectricity. New York City would be able to power all the lights on Broadway with hydroelectricity produced from water flowing through the pipes under Times Square, Quinn said in a statement.

“We are behind the curve, or behind the tide, if you will, when it relates to hydroelectric power,” Quinn told the Council. “This study is going to get us on target.”

The Speaker cited Boulder, Colorado as a positive example in hydroelectric power production. Boulder’s eight hydroelectric plants produce enough power for 7,500 homes, saving the city from having to burn 20,500 tons of coal each year.

The City Council also passed a bill (Intro 711-A) to expand the Library Card Act that requires the Department of Education to distribute information on public library cards to all students entering kindergarten.

Over 1,000,000 children eligible for library cards in New York City don’t have one, according to Council member Jimmy Van Bramer, the chairman of the Committee on Cultural Affairs, Libraries and International Intergroup Relations.

“That is something that we have done a lot already â€“ but need to do more â€“ to address,” he added.

Council members point to studies that suggest that developing literacy skills in pre-school improves reading comprehension later on in a child’s education.

Over 150,000 New York City children have received library cards since the Library Card Act was passed in 2010, according to Van Bramer.