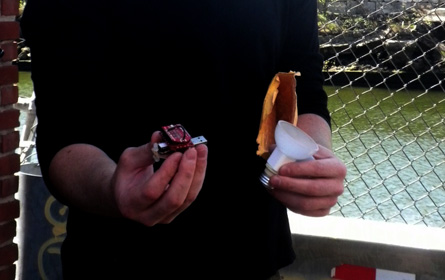 Every year 27 billion gallons of untreated sewage are released into New York Harbor during Combined Sewage Overflows, causing a number of health concerns. Percifield explains that a Combined Sewage Overflow occurs when rainwater overloads the city’s sewage pipes. The pipes then spew the rainwater and sewage out of overflow points along New York Harbor to keep from flooding the sewers.

Percifield, a graduate student at Parson’s, wants to place sensors at these overflow points that would detect Combined Sewage Overflows and alert New Yorkers when they are occurring. If New Yorkers conserve more water during the overflows, then less sewage will be spit out into the harbor, he says.

Percifield would like to sell light bulbs that would turn color to indicate an overflow that people would place in their kitchens or bathrooms. People would then wait until the overflow subsides (they usually last 4-6 hours) before doing their wash or taking a shower.

But Percifield still hasn’t worked out many details of his alert system. For instance, he’s not sure how to manufacture some components of his system in a cost-effective way, or how he will distribute the light bulbs.

“I would hope that Home Depot would sell them at some point. In the short term I have no idea,” he says.

He might not have every part of his plan worked out, but his project still caught the eye of In Our Backyards, an organization that raises funds for local environmental projects around New York City. With the organization’s help, Percifield raised $3,240 to get his project off the ground and build his first sensor and light bulb prototypes. He has installed his first sensor at an overflow point on the Gowanus Canal by Bond St. and 4th St. and he now has a light bulb in his bathroom telling him not to shower when a Combined Sewage Overflow is happening. Percifield says he is now talking with the city’s Department of Environmental Protection about helping him install and maintain his sensors.

In Our Backyards has helped fund over 125 other green projects like Percifield’s since it started in May 2009. Erin Barnes, one of the organization’s co-founders, says they call themselves a “crowd-resourcing” organization, combining crowd funding through their website and resource organizing in terms of helping their projects find volunteers and network with other organizations.

Barnes says that the co-founders â€“ all graduates of the Yale School of Forestry â€“ wanted to give New Yorkers an opportunity to reconnect with the environmental movement. Many environmental causes tend to seem distant and complicated to most urbanites, Barnes says.

“We wanted to change that [perception] and turn it on its head,” she says.

To date In Our Backyards has raised nearly $175,000 and successfully funded 101 projects including urban farms, community gardens, chicken coops and recycling programs. The organization receives funding from several foundations, and takes 20 percent of the money it raises for projects to cover its own costs.

The only criteria the organization uses to qualify a project for funding is that it must benefit the public in some way and it must have an environmental angle.

Most projects come to In Our Backyards through word-of-mouth, says Brandon Whitney, another co-founder. The staff canvases environmental events and green markets across the city spreading the word about their work and networking with potential donors. The organization also holds networking and fundraising workshops to teach project leaders how to reach out to donors in their neighborhood.

The average donation for one of the projects is just $35, and most of the donations come from people living within two miles of the project they are funding, says Whitney.

“It’s people helping out in their own neighborhoods, which is really cool,” Whitney says.

Often the neighborhood residents who donate to a project also volunteer time to work on its development. Volunteers lead the majority of In Our Backyards’ projects.

Pollos del Pueblo is a project that is turning a vacant East New York lot at 2358 Pitkin Ave. into the area’s first chicken coop. The project is raising funds through In Our Backyards and is managed by the Cypress Hills Local Development Corporation, a local non-profit.

About 25 local residents are pitching in to clear the lot and turn it into a functioning chicken coop and vegetable garden providing organic eggs and produce for the community. Many of the volunteers also donated to the project.

“This is something that we don’t have in our neighborhood and in our supermarkets, fresh fruits and vegetables,” says Mercedes Sandoz, a volunteer who has lived in the area for 26 years.

Last Tuesday Sandoz and a number of the other volunteers were mowing the knee-high grass and weeds that had taken over the lot, clearing the way for the chickens that will come in June.

Less than 25 percent of food retailers in the neighborhood offer fresh produce, according to Cypress Hills, which acquired the vacant lot to develop affordable housing. But since the lot was too small for a housing development, the non-profit decided to use it to address the shortage of fresh produce in the area, says Nuala Gallagher, the project’s manager from Cypress Hills.

The project will hold seminars to teach local residents how to practice urban farming in their own backyards. Local children from Cypress Hills’ after school program will also come work on the farm and learn about nutrition.

Sandoz and the other local volunteers transforming the lot are excited to see their time, sweat and money go into something that will make their neighborhood healthier.

“Now all the food is frozen,” Sanoz says. “The old healthy recipes, the old traditions, grandma’s recipes, I think we should go back to that.”

Nuala Gallagher says that she hopes to expand the project to other lots. More than 30 percent of the lots in the area are vacant, she says.

In Our Backyards is looking to expand too. The co-founders say they are now wrapping up their pilot phase here in New York and want to use their “crowd-resourcing” method to bolster local environmental projects in other cities.

“We’re just trying to show that there’s a lot of great things going on at a local level,” Brandon Whitney says.