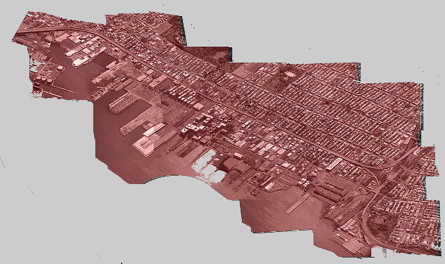 NEW YORK — For Sabrina Terry, the Sunset Park neighborhood where she works is at the front line of climate change.

The community along the Brooklyn waterfront is home to waste transfer stations, power plants, industrial facilities and tens of thousands of mostly low-wage immigrants. Devastating storm surges expected to be brought on by radically altered weather could flood the area and create a toxic brew.

“If you have a storm, who knows what is being washed up into the community? It’s not just the water — it’s what is being carried,” said Terry, an environmental justice planner who works for Uprose, a community-based organization.

Terry and her group have been vocal about their belief that the city wasn’t preparing sufficiently for the impact that climate change would have on coastal communities already struggling with environmental problems.

The City Council took steps to address those concerns yesterday, voting in favor of a bill that would enlarge the scope of a climate change panel and task force to focus on populations that are especially vulnerable to extreme weather events — such as the elderly, children and the poor. The legislation also makes the panel and task force permanent.

Council Speaker Christine Quinn said the point was to make sure that the city was thinking as broadly as possible.

“When you have severe weather circumstances and, say you need to evacuate people, it’s obviously more challenging at times to evacuate seniors, disabled New Yorkers,” she said in remarks to the press before their only full-council meeting in August. “If you don’t have a plan for that, it is going to be doubly hard.”

Councilman James Gennaro, who drafted the bill, said that when the city’s panel on climate change was created by Mayor Michael Bloomberg’s office in 2008, it was directed to focus its work on protecting critical infrastructure. “We feel it’s important to protect people, too,” he said.

The city launched PlaNYC in 2007, an ongoing sustainability planning effort involving 25 city agencies to prepare for population increase, strengthen the local economy and combat climate change. The city has also moved to reduce carbon emissions generated by government and by commercial and residential activity.

The mayor’s office was supportive of the council's measure. “It is building into law what we are doing,” said Bloomberg spokeswoman Lauren Passalacqua. “This is now a fixture of how the city thinks and operates.”

Terry praised the council for acknowledging the feedback from the environmental justice community. “In this new draft of the bill, they do acknowledge local leadership to ensure that this message gets out to the people who really need it,” she said.

“This is an effort to get on top of the biggest challenge the city may face in coming years, and to be inclusive about it,” he said.

In remarks made at an environmental protection committee meeting Tuesday, Gennaro said that, if passed, it would be the first time a municipality in the U.S. had decided to codify climate change preparation measures within city law. That claim could not be verified by press time.

Maintaining and overseeing public health, natural systems such as wetlands and waterways, the city’s critical infrastructure and overall building stock, and the health of the local economy will be the focus of climate-change planning and adaptation efforts, according to the legislation.

The two bodies that the bill will make permanent, the New York City Panel on Climate Change and the Climate Change Adaptation Task Force, work together to forecast and plan for climate change within the five boroughs.

Gennaro explained that the adaptation task force functions as “the boots on the ground,” employing the analysis developed by the panel’s scientific experts. The task force will be responsible for planning and implementing “hard strategies,” such as a network of storm surge barriers; “green strategies,” including marsh restoration; and “soft strategies” — zoning, for example.

The task force is comprised mainly of relevant city agencies, but will also include public members "not limited to representatives from organizations in the health care, communications, energy and transportation fields,” according to the legislation.

In 2010, the panel — made up of climate scientists and academics, along with legal, insurance and risk management experts from the private sector appointed by the mayor — released what was described as the first official climate change projections for the city.

According to the report, the city’s vulnerability to progressive sea level rise and the flooding of low-lying neighborhoods and infrastructure is a key challenge. Intensified storms could also cause more inland flooding. At the same time, heat waves are likely to occur more frequently and for longer periods; severe droughts are also projected.

The bill codifies one part of a two-pillar strategy to tackle climate change. Earlier legislation dealt with how the city can reduce its carbon emissions.

If the legislation becomes law, both the panel and the task force will be required to meet at least twice a year. The panel is required to release new climate change projections within one year of the release of climate data by the U.N.’s intergovernmental panel on climate change, and once every three years at minimum. The task force is required to create an inventory of potential risks and identify issues for further study within one year of new projections.

All reports are to be made available to the public and both bodies are to coordinate with the mayor’s Office of Long-Term Planning and Sustainability on developing borough and community-level communications strategies.

“It’s important to think reasonably about the impacts which are coming,” Gennaro said in an interview. “We are a coastal city.”