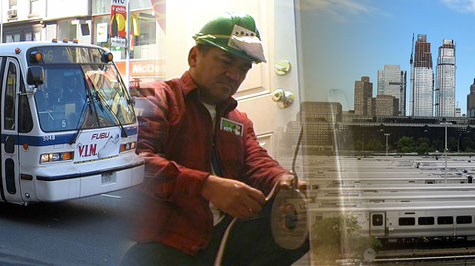 Last month, President Barack Obama signed the American Recovery and Reinvestment Act of 2009, otherwise known as the "stimulus package." This new law includes $463 billion in new spending, as well as $326 billion in tax cuts that aim to create more than 3.5 million jobs nationwide.

While most reports have focused on the job creation and economic development aspects of the bill, this law can be viewed through an energy, infrastructure and environmental lens. From that perspective, the stimulus package is one of the most significant energy and environmental laws in a long time -- thanks to roughly $80 billion in new investments that will lead to greater energy efficiency; increased use of solar, wind and other alternative energy sources; more funding for urban and suburban transit; additional money for modernizing our highways and bridges; new investments in high-speed rail; cleaner water; and upgraded environmental infrastructure. New York State stands to get a substantial portion of this spending, which will help public and private efforts to create a cleaner and more energy-efficient city and state.

Energy, Infrastructure and the Environment

The New York Times editorial board correctly noted that, if the energy and environmental provisions were separated into a stand-alone bill, it would be "the biggest energy bill in history," thanks to the new spending and tax incentives for energy and infrastructure investments. Overall, the plan will more than triple the amount of federal spending on clean-energy programs.

* A three-year extension of the wind power tax credit, which would have expired at the end of this year, and the tax credit for geothermal and biomass renewable energy projects.

* $4.5 billion in direct spending to modernize the electricity grid with so-called "smart-grid" technologies;

* $2 billion in loans to build advanced batteries and components for advanced vehicles, such as plug-in hybrid-electric cars;

* $5 billion to weatherize the homes of as many as 1 million low-income people;

* $3.4 billion appropriated to the Department of Energy for fossil energy research and development, such as storing carbon dioxide underground at coal power plants;

* $300 million to retrofit old, dirty diesel engines with pollution-cutting filters and other devices.

What Will New York Gain?

New York's environment will be a great beneficiary of this stimulus package. Given the senior role of several of our elected officials in Congress, that's not too surprising. Sen. Charles Schumer is the third-ranking Democrat in the Senate, Harlem Rep. Charles Rangel chairs the powerful House Ways & Means Committee, and Rep. Jerry Nadler is senior member of the House Transportation Committee and a perennial champion for New York's infrastructure investments. To fill out the team of powerful New York congressional members, Rep. Nita Lowey and Rep. Jose Serrano must be included, thanks to their senior seats on the influential House Appropriations Committee. All played key roles in ensuring that New York's environment would benefit from the stimulus plan.

Overall, New York is expected to receive $24.6 billion in funding from the act. But this doesn't begin to tell the full story.

Mass transit tops the list of environmental benefits for New York from the stimulus package. This funding could not come at a better time, given the Albany debate about the best way to save the Metropolitan Transportation Authority's subway, bus and train service and minimize any fare hikes.

The stimulus law will deliver more than $1.2 billion to help meet New York's mass transit needs. For the first time, Washington is sending our state more money for transit than for highway spending. Formula funds set in the bill will deliver at least $967 million for our existing transit system, plus another $254 million for investments to modernize our rail systems. Together, these transit funds exceed the $1.1 billion in federal stimulus funding for our highways. Plus, given our aging infrastructure, high proportion of the nation's rail passengers and over-crowded airports, it is reasonable to hope that New York will receive some of the new federal funding for rail projects ($9.3 billion), discretionary surface transportation projects ($1.5 billion) or airport improvements ($1.3 billion).

New York's water infrastructure will receive critical investments, thanks to the stimulus package. The state will receive $435 million from the Clean Water State Revolving Fund and another $85 million from the Drinking Water State Revolving Fund. Along with a recent court decision upholding the federal Environmental Protection Agency's approval of the city's plan to keep its drinking water clean and safe, these funds should benefit all New Yorkers who use our tap water.

Last but certainly not least, the bill contains $300 million to retrofit old, dirty diesel buses, trucks or other diesel engines. To a certain extent, this is a going-away present to New York from Secretary of State Hillary Clinton. Back in 2005, then-Sen. Clinton partnered with Sens. George Voinovich of Ohio and Thomas Carper of Delaware to pass the Diesel Emissions Reduction Act, a law that authorized up to $200 million per year to clean up dirty diesel engines. Unfortunately, less then $50 million was appropriated last year. In a little-noticed corner of the bill, the diesel retrofit program received $300 million for the next two years. Given that every dollar spent to reduce diesel pollution yields more than $15 in health benefits, this may be one of the greatest bargains of the environmental world.