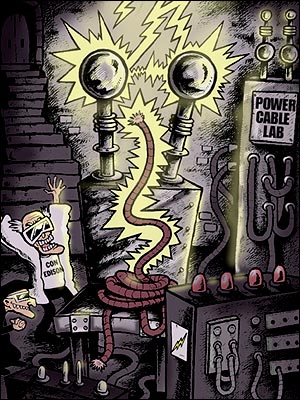 New York's blackouts are legendary. In 1965, a single transmission line failed in Toronto, Canada setting off a domino effect that within 15 minutes left 30 million people from Staten Island to Ontario in darkness. A movie was made about it starring Doris Day.

Though steps were taken to prevent local outages from overloading the region's power grid again, another blackout occurred on a sweltering summer night in 1977, when a lightning storm short-circuited the city. It was the summer of the Son of Sam and an era of fiscal crisis. The blackout brought vandalism, violence and arson. According to the Blackout History Project, police arrested more than 3,700 people, but could not control rampaging mobs in some parts of the city. This blackout did not lead to a Doris Day movie.

It might surprise New Yorkers to learn that, a quarter century later, there are some 2,000 power-line failures a year in the city. Consumers do not notice most of them because New York's electric system, which industry rating groups say is the most reliable in the country, is designed so that if one power line fails, another picks up the slack.

Still, the problem of blackouts persists. In 1999, cables burned and overheated, casting a shroud of darkness over the Washington Heights and Inwood areas of Manhattan for 18 hours -- the largest prolonged blackout since 1977. In 2001, equipment failures led to scattered outages in Manhattan, Brooklyn, Queens, the Bronx and Westchester. And last summer, a fire at a Con Edison transformer cut electricity for seven hours to Manhattan's East Side.

A variety of things can cause power outages, including equipment failures, fires and weather conditions, such as lightning. The lights went out in Washington Heights on a day when electricity usage topped 11,850 megawatts, then a Con Edison record. And so conservation efforts can help avert power outages.

But cable failure played a major role in the Washington Heights power failure and has contributed to many problems that consumers never notice. With that in mind, Con Edison and other utilities that rely on underground cables want to learn how to prevent cable failures before they occur. That is why they have opened a laboratory in the Bronx to find out what makes seemingly good cables go bad.

Con Edison maintains some 126,000 miles of cables, about two thirds of which are underground and so fairly immune to lightning and other vagaries of the weather. High voltage transmission lines bring electricity from generators to local sub-stations. Medium voltage lines, called feeder cables, then distribute power to transformer boxes. From there, it is delivered by low-voltage lines to individual homes and offices.

The utility divides its service area into 78 networks, 33 of them in Manhattan. Each network contains from six to 24 feeder cables. One or two downed feeders within a network may go unnoticed, but if more fail it can overload the network and lead to outages.

Therefore, the best way to prevent outages is to identify vulnerable cables before they fail. "That's the Holy Grail," said Con Edison spokesman Chris Olert. "Knowing, 'Well, that cable is going to fail in eight hours or a week.'"

Even though utilities can be allowed to pass the costs of replaced cables on to ratepayers, they prefer to replace only those cables most likely to fail, rather than be forced to replace hundreds of miles of cable that could still provide years of services. And since consumers pay for new cables in the form of higher electric bills, they may endorse this conservative approach - unless their lights go out.

"We did testing on cable installed in the 1920s. We pulled it out, and it was as good as new," said George Murray, a cable engineer and the lab's acting director. "So, rather than replace a cable because of some arbitrary standard like age, we want to leave that cable in service and target cables about to fail or give us a problem."

But preventing outages is not the only reason to replace cables, says Jason K. Babbie, a policy analyst with the New York Public Interest Research Group. He says older cables tend to leak more power than newer ones and that upgrading cables would improve efficiency, save energy and alleviate the need to build more generators and sub-stations.

"While a cable from the 1920s may still be working that doesn't mean it's working efficiently," he said. "One of the criteria that Con Ed should be considering is how to improve the efficiency of the system as a whole."

Environmental benefits may also come from replacing older cables. Paper insulation in older cables contains oil that can leak into the ground in small amounts. Lead casing can also pose a risk. Newer cables are insulated with plastic.

Nevertheless, at the moment Con Ed's focus is on figuring out which are the cables about to give. According to Murray, small manufacturing differences in cables can affect how they perform under duress. A common cause of cable failure is what Con Edison engineers call "trauma," physical damage usually done by workers making repairs to the snarl of cables, pipes and fiber optic wiring that compete for space beneath the city's streets. (To view a cross-section of the city's underbelly, visit National Geographic's site)

Rock salt, used to clear streets of snow and ice, also can wreak havoc on cables. Salt is not only corrosive, but also conductive. This means that salty run-off after snowstorms can eat through insulation and carry current between conductors and to the ground. "The more salt in winter, the more failures we get in the spring," said Murray. As a result, there have been a particularly large number of failures this year although the public has noticed few if any of them.

MOCK MANHOLES AND AUTOPSIES FOR CABLES

The $10 million Cable &Splice Center for Excellence on Con Ed's Van Nest campus near the 180th Street subway stop in the Bronx is a joint project of Con Edison and the Electric Power Research Institute, a national energy research and development organization. At the heart of the new facility is a mock manhole encased in soil where the climate can be controlled to mimic conditions underground. The lab also includes four voltage-testing areas, a diagnostic lab and an impulse generator that can simulate the effects of lightning. The lab's total of three manholes enable engineers to study how moisture and other weather conditions can affect cable joints, which are typically found in manholes. Minus rats, cockroaches, water bugs, methane gas buildup, tree roots, garbage and so forth, the manholes are exact replicas of their underground counterparts, Murray said.

The lab is outfitted with an array of equipment painted in cheerful primary colors, including bright red transformers that can step up electricity to 120,000 volts -- three to ten times the charge that normally runs through the city's distribution lines.

"It's like an autopsy for cables. It's where cables go to die," said Olert.

Con Edison and its fellow utilities hope the lab's efforts will enable it to develop a diagnostic system to repair legacy cables more efficiently. "You have to look at a lot of different factors," said Walter Zinger an electrical engineer with the Electric Power Research Institute who is coordinating the lab's work with that of other partners in the institute's Cable Testing Network. "Say the normal failure probability is 'X' and in this condition it is '10X.' You still don't want to replace all those cables because the probability [of failure] is still one in 100 . . . And that's why we do this."

The lab's first task will be to research feeder cables of the kind blamed for the power outage in Washington Heights in 1999.

Capital spending by utilities has gone down in the past several years but reliability has improved, with Con Edison achieving the highest reliability index in the state.

A study (in pdf format) released by the New York State Energy Planning Board in 2000 found that New York City had a significantly lower rate of service interruptions per customer than the rest of the state. It also found that, although capital investments in the power transmission system declined dramatically from 1988 to 1998 (from $304.4 million in constant 1998 dollars to just $90 million), the reliability of the state's transmission system improved during the same period.

"This suggests that transmission system expenditures are being used more effectively, or that these factors have less of an impact on actual reliability than other factors," the report concluded. Spending on operations and maintenance remained constant during the period studied.

David Flanagan, director of public information for the commission said that since then, the utility has been keeping its commitments.

Some question, though, whether the system will continue to be reliable without some increase in spending. A spokesperson for Assemblymember Paul Tonko, chair of the energy committee, said Tonko believes the decline in capital spending and in replacing skilled utility workers could lead to problems down the road.

Con Ed says that failures may occur more frequently outside midtown and downtown Manhattan because the networks in the outlying areas cover greater distances. As a result there are more cables and connections between the local sub-stations and the homes and offices they serve and so a greater statistical probability that one will fail, Murray said.

In the longer term, research in cable technology could eventually save money. Tonko and others think that super conductivity cables, which are currently under development and can carry five times as much electricity as copper wires of the same size, might some day open New York's system to more distant suppliers and thereby encourage greater competition, bringing down electricity prices. "If you had super conductivity coming into New York City and Long Island, you would then have more capacity," Tonko said. "If you have greater capacity to deliver you open up the system."

It could be decades, though, before this technology is ready for general use. "As the Cable Center evolves, we may find new uses for its testing equipment," said Olert. But for now, the lab's research is focused on maintaining existing cables and keeping the city switched on.

RELATED ARTICLE: After The Blackout - Going Back To The Experts