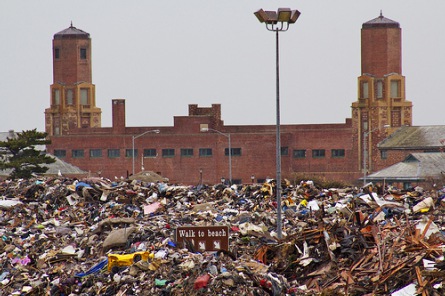 NEW YORK — Now that the construction of a new chain of natural gas pipelines running from the Rockaway peninsula to Brooklyn has been delayed following Superstorm Sandy, residents and elected officials are beginning to question whether the project is safe to build at all.

The exceedingly complex project would be constructed in separate phases — under the regulation of federal, state and local authorities — adjacent to coastal communities that were among the hardest hit during the storm.

U.S. Rep. Yvette Clarke, who represents central Brooklyn, told Gotham Gazette in an emailed statement that the destruction caused by Sandy had raised concerns among residents who live near the proposed gas pipeline project.

"Our need for independent energy cannot precede the safety of our community and environment," she said.

State Sen. Joseph Addabbo, whose new district includes the Rockaways, said he would organize a town hall meeting where residents could ask their questions about the project.

"Doing this simultaneously with Sandy becomes a daunting task," he said of the project. "People are trying to get their lives back."

He added that residents have come to him with some hard questions about the project. “This is a major endeavor," he continued. "What is the protection from a gas leak? What are the precautions? What is the time frame?”

National Grid spokeswoman Karen Young told Gotham Gazette that the storm had not affected phase one of the project — the utility’s plans to construct two gas pipelines underneath Jamaica Bay’s Rockaway Inlet. She added that they were "still meeting with all of the officials and agencies to determine the best time.”

Oklahoma-based Williams Companies, which is also constructing sections of the pipeline, was still expected to move ahead with its part of the project.

Williams spokesman Chris Stockton said on Friday: “The hurricane has not changed our plans, nor has it changed the need for this project and the gas for the city." But, referring to the fact that Williams’ portion of the project had not yet received the necessary approvals, he added that there was "still a long way to go.”

Asked whether additional precautions needed to be taken during pipeline construction, Young said: “We had a robust plan in place, and the measures that we are planning to implement are above and beyond industry standards”.

She added that the pipeline had been designed to withstand flooding, would be buried underneath the seabed of Jamaica Bay and regularly monitored and inspected, especially during severe weather events.

Young stated that National Grid felt it had designed a "very safe” pipeline. She noted that the pipeline would have isolation valves that could be activated remotely in the event of an emergency.

The Rockaway pipeline is a key part of the energy initiatives outlined in PlaNYC, Mayor Bloomberg’s far-reaching sustainability plan.

The mayor’s office did not respond to questions regarding whether construction or ongoing maintenance of the Rockaway pipeline would need to be re-thought in light of the area’s vulnerability to future catastrophic storms.

A full month after Sandy made landfall, the profound impact of the storm on both the residents and natural environment of the Rockaways is grimly evident.

Major arteries in the Rockaways were jammed with emergency and utility trucks on Saturday, and construction on damaged homes was visible throughout. In Breezy Point, the community closest to where pipeline construction will begin shortly, it was possible to see homes that had been torn off their foundations, and a car that had been incinerated almost beyond recognition by the fires that engulfed the area.

Much of the construction on the pipeline will take place in Gateway National Recreation Area, a 26,000-acre National Park, which includes ocean-facing Jacob Riis Park and the Jamaica Bay Wildlife Refuge. The Bay’s wildlife refuge is the only such refuge in the National Park System, according to the New York Harbor Conservancy.

Other sections of the park — which will eventually be adjacent to pipeline construction — are now serving as sites for hurricane clean-up and reconstruction efforts.

“The Bay has taken a big hit,” said Dan Mundy, vice-president of Jamaica Bay Eco-Watchers. He added that “tremendous amounts” of fuel oil and debris had entered Jamaica Bay as a result of the storm, and that two freshwater ponds had breached “in a very dramatic fashion." Mundy explained that tides had flushed out much of the oil, but he added that the post-storm period was a “critical time for mitigation”.

Just across the Bay, the scope of the tragedy of the storm is visible in the parking lots of Jacob Riis Park, which have been turned into a massive dumping ground for the remains of destroyed homes and other refuse. From the dumping ground, one can see the fences and other beach infrastructure torn apart by the reported 14-foot coastal storm surge that entered the area on the night of Oct. 29.

Because of its vulnerable position, areas around the Rockaway peninsula are now considered possible locations for storm barriers.

In a later phase of construction, National Grid will connect its cross-Bay lines to customers in Brooklyn and Queens, via a new gas meter and regulating station to be housed within a historic hangar at Floyd Bennett Field, and by eventually linking with an existing gas main on Flatbush Avenue.

The 60,000-square-foot meter station will be constructed by Williams. Parking lots behind the hangars at Floyd Bennett Field are currently a massive staging area for FEMA, the Red Cross, construction companies and scores of fuel tanker trucks.

Chris Stockton said that Williams planned to submit a final proposal to the Federal Energy Regulatory Commission by late 2012 or early 2013. He said that based on the company’s experience with previous applications to FERC, the agency’s review of the proposal could take another eight months.

In a statement on the signing, Mayor Bloomberg said: “Given the destruction of Hurricane Sandy, this law could not come at a more critical time for New York City. This pipeline will help us build a stable, clean-energy future for New Yorkers and will ensure the reliability of the City’s future energy needs.” The mayor specifically thanked the bill’s sponsors, Sen. Charles Schumer and Congressmen Michael Grimm of Brooklyn and Staten Island, and Gregory Meeks of Queens.

The Rockaway pipeline project has spurred protests from some local residents and environmental groups, who have raised questions about possible impacts to coastal marine life, and whether a gas pipeline is an appropriate use for an urban park. The city’s commitment to natural gas — a fossil fuel — as an ongoing energy source has also proved controversial.

“This bill puts a pipeline under a popular beach and introduces private industrial use of a federal park, and it does so with no public input,” said Karen Orlando, a local resident and Floyd Bennett Garden Association member.

Local groups like Jamaica Bay Eco-Watchers are watching the federal review process closely, and believe that they may be able to impact decisions that are yet to be made. They also say that the Rockaway Pipeline speaks to public policy questions relevant to the entire city.

Mundy argued that if the Williams section of the pipeline project is to go forward, there must be a commitment to off-set some of the ecological damage that he said he believes will inevitably be inflicted by construction of a 2.79-mile pipeline on the ocean floor.

Another federal agency has raised questions similar to Mundy’s. In October, the Army Corps of Engineers wrote to FERC, requesting that Williams provide more specifics on the ocean floor trenching and dredging techniques it will use, and how the aquatic ecosystem off the Rockaways could be affected.

Stockton said that questions on the project raised by the Army Corps and other agencies would be addressed in the company’s final proposal to FERC.

Mundy said he believes that any possible damage to the ocean floor habitat should be offset by a focus on restoring Jamaica Bay’s saltwater marshes.

Marshes throughout the city have attracted new attention because they can help to blunt the impact of coastal storm surges. “The wetlands will be a big topic of discussion,” said Mundy. He added that not only are they a form of “soft infrastructure”, but they also help to absorb carbon from the atmosphere.

At the same time, Orlando argued that the placement of what she describes as “industrial infrastructure” within Floyd Bennett Field, “a couple hundred of feet from a community garden used by four to five-hundred members and their families” has broader implications for both private use of public space and government transparency.

She said the city "couldn’t do that in Prospect Park or Central Park.”