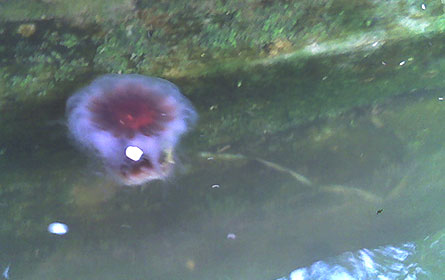 
Pewter-colored water lapped up onto the bottom concrete step of an industrially inspired public park on the bank of Newtown Creek.

Amid the new plantings and tall grass, a middle-aged man chased his tawny, rather stout canine around the concrete landscape -- one of the only access areas along the estuarine waterway.

He kept his dog away from the water's edge. And any passersby would likely do the same.

With an oil spill that carries its namesake and a putrid stench known to inspire headaches, Newtown Creek is the product of decades of oil refining, concrete crunching and trash condensing. The long-defunct oil mammoth, Standard Oil, called its shores home, and now so do its contemporaries, Exxon Mobil, Chevron and BP. These giants -- and many others, say advocates -- have helped make Newtown Creek one of the country's most polluted waterways.

For decades, residents and environmental advocates have been pushing for the federal government to clean up the creek, which divides Brooklyn and Queens, but to no avail. Now with the Gowanus Canal under consideration as a federal Superfund site -- a designation made by the U.S. Environmental Protection Agency -- and the area's legislators on board, including Rep. Anthony Weiner and Rep. Nydia Velazquez, advocates hope that Newtown Creek will finally get its cleanup.

How It Got So Dirty?

Members of the Newtown Creek Alliance are probably the waterway's biggest champions. 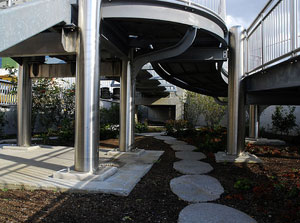 Strolling the creek's Nature Walk, a small public walkway adjacent to the area's wastewater treatment facility, alliance members Michael Heimbinder, Laura Hofmann and Kate Zidar take in the less than picturesque view and the stench wafting from the stagnant channel with surprising pleasure.

Across the way, forming the start of Queens County, they spot the delivery truck parking lot for Fresh Direct. Next door towers of crumpled cars sit on a large barge most likely belonging to waste management company Hugo Neu.

"This neighborhood was pretty much the backyard of the industrial revolution," said Zidar, while, at her feet, a bright pink Clorox label floats by.

That industry, which may have lifted a country, deluged Newtown Creek with oil, chemicals and toxins.

The oil industry's history in the Greenpoint area dates back to the 1800s. During the 1870s, more than 50 oil refineries were located along the banks of the creek, according to the Environmental Protection Agency. Between that time and the 1960s, Newtown Creek was a virtual oil refinery shopping mall -- all the heavy hitters were there, from Chevron to Mobil, now Exxon Mobil. 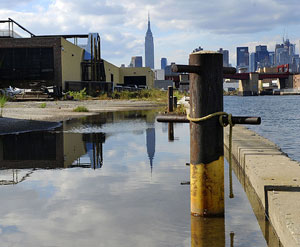 In 1978, during a routine helicopter flyover, the U. S. Coast Guard noticed an oil slick at the mouth of the creek, which meets the East River. That observation has today amounted to an oil spill, which released between 17 million and 30 million gallons into the creek, according to the Environmental Protection Agency. It is unclear, the agency says, whether the spill occurred over time -- a petroleum leak from companies' pipes that produced a pool of oil on the creek's floor -- or if it was one single and totally unnoticed event.

The Environmental Protection Agency also reports it is unclear which companies are wholly responsible -- though many name Exxon, Standard Oil's successor, as the primary offender.

In 1990, the oil companies and the state Department of Environmental Conservation reached an agreement to remove the petroleum, but critics allege its enforcement has been inadequate. According to the state, that effort has removed 10 million gallons of "petroleum product" from Newtown Creek.

Because of the spill, at least two lawsuits have emerged -- one from a number of Greenpoint residents and environmental advocacy group Riverkeeper and another from Attorney General Andrew Cuomo. The Riverkeeper suit is against Exxon, BP and Chevron, while Cuomo has targeted Exxon only. Both hope to spur a faster and more widespread cleanup of the creek.

Possible health effects from the oil spill are not completely clear either. In 2007, the state tested some of the homes near the spill area for chemical vapors and determined that it was unlikely such contamination had occurred. Though the vast majority of either side of Newtown Creek is industrial, community advocates and officials fear the toxins may have leaked through the ground to homes less than a half-mile away.

The state has found, however, increased levels of methane, benzene, and other petroleum related compounds in commercial and industrial buildings within the neighborhood.

Some advocates disagree that the centuries worth of industry and production didn’t affect the health of the area's residents.

"My family's medical history reads like an Area 51 report," said Hofmann, who has lived in the neighborhood her entire life.

Hofmann, who is a plaintiff in the Riverkeeper lawsuit, says her whole family has been afflicted by an array of rare ailments and diseases -- from brain cancer to congenital spherocytosis, a type of anemia.

"The cumulative effects of everything are so far beyond anything we know, it's criminal," said Zidar.

The Work to be Done

Next to the former Standard Oil site, members of the alliance climb onto a protruding slab of cement to point out some of Exxon's "product capture" methods.

The water is stagnant, except for the small waves made by a passing boat named "Donna M" (most likely connected to an adjacent company), and the putrid smell forces alliance members to shroud their noses with their shirts. 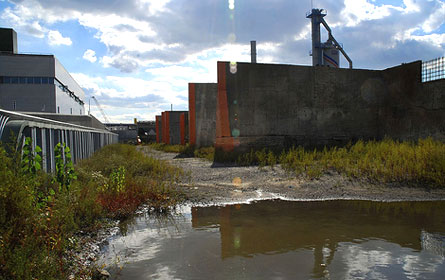 "Too bad you can't photograph that smell," quipped Hofmann. "You need a scratch and sniff for that."

On the left bank, what looks like a plastic buoy lies across the water, creating a horseshoe-like loop against the creek's edge. That, said alliance members, is part of what the area's oil companies use to keep in their product.

Several feet away, a large pipe bursts out of the bank, spitting out gallons of brownish water. That, they explain, is the outfall, which pours the treated water back into the creek. You can smell the petroleum elements, Heimbinder says.

In 20 years, little has been done to clean up the creek, advocates allege. Unlike the Gowanus, the entire Newtown Creek area is filled with manufacturing or other industries. If no one lives nearby, advocates say, any remediation is "out of site, out of mind."

Hence, the need for the federal government to step in, they say. If Newtown Creek were designated a Superfund site, the Environmental Protection Agency would take over the site's remediation. The agency would seek out responsible parties, and sue them to get funding for the cleanup, which would most likely include dredging the 3.5-mile stretch of channel.

If they lose these cases, they are committed to cleaning up the site with federal dollars. At the behest of the state Department of Environmental Conservation and former Sen. Hillary Clinton and Congress members Velazquez and Weiner, the Environmental Protection Agency started testing the water in January. It finished sampling last month and is currently analyzing the results, a spokesperson said.

The agency releases two sets of Superfund sites per year. Elizabeth Totman, an agency spokesperson, said the agency was not ready to release the results from the creek's testing. The agency would be releasing another set of potential Superfund site designees later this year -- maybe the creek will be one of them.

There are approximately 10 state designated Superfund sites near the Brooklyn banks of the creek, accounting for 36 percent of the state sites in the county.

In response to a request for comment, a Bloomberg administration spokesperson said: "The city hasn't yet taken a position on the potential Superfund designation of Newtown Creek. We’re doing internal analysis now and plan to meet with the EPA next month before expressing any view. The city plans to invest nearly $1.9 billion in Newtown Creek related projects over the next decade."

The area's longstanding oil refineries are not the only ones to blame for the creek's noxious state.

The city too could be named a responsible party if the creek were designated a Superfund site. Like the Gowanus, the creek falls victim to the city's combined sewer overflow system, which covers about 65 percent of the city.

Heavy rainfalls overwhelm our sewage treatment system, forcing millions of gallons of raw sewage to pour out into our waterways annually. Newtown Creek is an incredibly stagnant body of water, which leaves our trash and feces floating throughout it.

Standing at a combined sewer outfall at the far end of one of the creek's tributaries, Zidar, who is also a founding member of the Storm Water Infrastructure Matters Coalition, explains that this one particular site deluges the creek with 288 million gallons of water a year -- ranking number 25 out of 400 in the city. 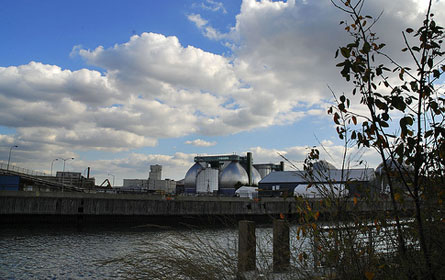 The water doesn't move, she says with the creek's bank serving as her backdrop -- one could spot the remnants of a four-door car half in and half out of the water. Sewage then, she adds, just mixes into the creek.

"The dilution is the solution doesn't apply here," said Zidar.

Because the city's stormwater system is so vast, it would be impossible -- or incredibly expensive -- to reconstruct in its entirety. The city is in the process of implementing a number of policies to divert stormwater or capture it and release it slowly following a rainfall, but advocates question how much of an impact that will have.

A Long Waterway Ahead

There is a reason why Superfund sites are controversial. For one, litigation can take decades to settle. After 25 years, dredging on the Hudson River, a Superfund site, started just this month.

Advocates also wonder how dredging certain areas of the creek, effectively cutting off access to its use, would affect the area's industry, which still uses the waterway. The city's garbage carriers use Newtown Creek to carry our waste to out of state landfills and incinerators.

By and large, advocates and Greenpoint residents and representatives want something done. Bernie Ente, an alliance member and Maspeth resident, was touring the area in his large Suburban last week. He may attribute 20 years passing without the drive for a cleanup to a possible lack of grievance.

"It's just the neighbors to the right don't complain a lot," Ente said. Then he pointed to Calvary Cemetery.