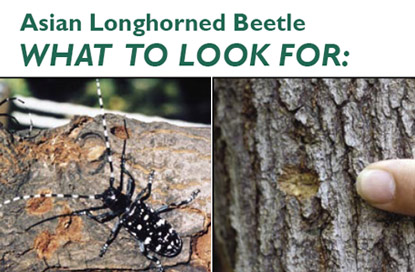 Like a monster in a sci-fi movie, an invading black-and-white beetle with outsized striped antennae has the potential to undo the city's efforts to plant a million more trees. The Asian long-horned beetle could kill nearly half the city's hardwood trees and spell disaster for the Northeast's forests, parks officials say.

A tree-killing attack starts when the beetle chews holes in the bark of a tree to lay its eggs. The eggs hatch into larvae that bore into the heartwood, where they live and feed during the colder months before emerging as adults in the spring. The Asian long-horned beetle infests many different kinds of hardwoods, including all maple species, birch, horse chestnut, London plane, sycamore, poplar, willow, elm and ash.

It is believed that the beetle hitched a ride in wooden packing material shipped from China. The first New York sighting of the beetle was in Greenpoint, Brooklyn, in 1996. Since then, it has been found in all boroughs except the Bronx, as well as in Long Island and New Jersey. (A separate infestation discovered in Chicago in 1998 was recently declared eradicated by the U.S. Department of Agriculture.)

Last year, the invader made inroads into Staten Island for the first time, using Prall's Island, an uninhabited bird sanctuary in the Arthur Kill, as a stepping stone. At the time Parks Commissioner Adrian Benepe warned that, if left unchecked, the beetle "could wipe out .... half of the trees of Staten Island, which would completely change the character of the island."

Federal and state agencies and the city parks department quickly mounted an intensive control effort. Parks workers cut down and chipped nearly 3,000 trees on Prall's Island and 6,700 trees on the nearby Staten Island shore, destroying infested trees as well as any tree that could be a potential host within a half-mile radius.

In Staten Island and all the areas where the pest has been discovered, the state and federal agencies conduct year-round surveying for evidence of infestation; in the spring, insecticide is injected into potential host trees within a mile and a half of known infestations.

The eradication efforts appear to have halted the Asian long-horned beetle's advance in Staten Island, and so far this year no new infestations have been reported anywhere in New York City.

To prevent the inadvertent spread of the beetle, the parks department also provides free pick-up, chipping and disposal of residential wood waste in the four boroughs where the pest has been found.

The Government and the Public

In spite of the seriousness of the threat, federal funding to fight the beetle in New York City has been cut in recent years. For next year, Rep. Anthony Weiner is asking for $48 million for the federal beetle eradication program, $30 million of which would go to the city.

"New York City is the central point of infestation," Weiner said at a press conference earlier this year. But, he added, ""If we don't stop this, it won't be only a New York City problem."

Even if Washington did step up its support, the parks department would be unable to survey the city's more than 5 million trees in streets, parks and yards. As a result, the eradication effort depends on the public. Anyone who suspects an infestation should call the toll-free number 1-877-STOPALB or 311.

The beetle is one to one-and-a-half inches long, with a shiny black body, white spots and very long, black-and-white striped antennae. Telltale evidence of an infestation includes dime or pencil-sized holes, usually in a tree's upper trunk or branches, and piles of frass (sawdust and insect waste) at the base of a tree or where branches meet the trunk.

Anne Schwartz, in charge of the parks topic page since its inception in 1999, is a journalist who specializes in environmental issues.Â