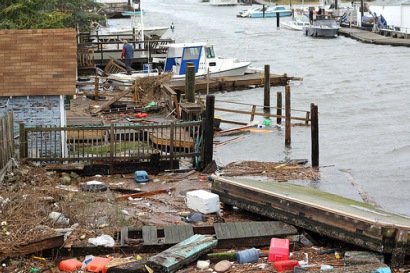 ALBANY, N.Y. — A house disemboweled by flooding, a boat in the middle of a normally busy road, boilers and basements under water, a boardwalk blocks from where it normally stood.

While normal life has returned to some sections of the city, these images are still seared into the minds of residents of parts of Queens, Staten Island, and Brooklyn, and for others the destruction wrought by Superstorm Sandy is still physically inescapable, forcing them to live without power, heat, a regular place to sleep or in homes infested with mold.

“If you don’t live in these impacted communities you just wouldn’t know what it is like,” said Republican state Sen. Marty Golden, who represents parts of south Brooklyn that were hard-hit by the storm. “People living just two miles away from some of this have no idea what the conditions are. Sandy has not left us and she is going to be around for a long time.”

Golden is a member of the State Senate's Bipartisan Task Force on Hurricane Sandy Recovery, which could release details on a package of legislation Monday aimed at helping residents still reeling from the storm. Legislators are keen to start delivering money to rebuilding efforts so they can show their districts that they can bring home badly needed relief funds, especially with state budget negotiations moving faster this year and President Barack Obama recently signing $60 billion relief bill.

In exploring their options, legislators say have they focused on marshaling services, resources, specialized labor and insurance experts to boost rebuilding efforts and to get people back to normal faster. Proposals would eliminate sales tax on cars and home building materials for Sandy victims.

There are also a number of programs designed to help Sandy victims that legislators want to see extended. They include an informal program announced by Cuomo where New York-chartered banks and other participating institutions can give homeowners in areas impacted by Sandy a break on their mortgage payments. Another instituted by the Internal Revenue Service allows Sandy victims to borrow from their 401k without penalty to, as Golden says, “allow them to get whole again.”

The task force toured communities in Brooklyn and Staten Island on Thursday in an effort to get a sense of the scope of Sandy’s lingering devastation, which is not obvious when just looking at the numbers — but the numbers are still staggering; 305,000 homes damaged or destroyed, displacing over 40,000 in the NYC area alone, and impacting over 265,000 businesses.  “We need a plan,” said Golden. After the tour, the members of the task force held a roundtable discussion with labor and community leaders, politicians and first responders.

“We intend on putting together a comprehensive package of legislation,” said Sen. Jeff Klein, head of the Senate’s  Independent Democratic Conference and a member of the task force, at Thursday's hearing.

The task force formed in the wake of the announcement that the IDC would be joining forces with the Senate Republicans to keep Senate Democrats from taking control of the chamber despite what at the time looked like a numerical victory.

At Thursday’s meeting of the senate task force, Sen. Diane Savino described just how damaging Sandy has been for businesses to her district on Staten Island. “One of the things that gets lost,” Savino said, “is the impact the storm also had on the north shore. Most people don’t realize what the impact of our industrial waterfront has been tremendous. We’ve got businesses that have been put off-line — who can forget the picture of that giant tanker washed out on to Front Street? So, the damage has not just been to residential districts, it’s also been to our business districts."

Golden said that he is particularly concerned with those who have been mentally and financially traumatized by Sandy and don’t know where to go for help. “Who knows how many people have had mental breakdowns," he said. "Who knows how many people are in the stages of bankruptcy. We need to give them the appropriate help to keep them afloat but they need to know to reach out to us."

Democratic Sen. Joe Addabbo, whose Queens district was one of the hardest hit by Sandy, has a list of concerns of his own — some of which are unique to Queens and others that are all too common across the areas impacted by the storm.

“I still have over 7,000 homeowners in the Rockaways without power,” Addabbo said. “There are those homes in Breezy Point that haven't been rebuilt, homes across the district that need rebuilding. There are some businesses that will never come back but there are some mom-and-pop stores that gotta come back for the fabric of the community, and we gotta help them. The money from the bill that the [US] Senate just passed can't come quick enough. It has been three months."

Addabbo has cosponsored a bill put forward by Sen. Daniel Squadron that would give property tax relief to Sandy victims. Addabbo is working on legislation that would give small businesses a small amount of cash to restore their storefronts.

Perhaps the most common concern among legislators is that residents will simply pack up and leave — they suspect that a number of them already have. Golden noted that it is hard to tell just who has abandoned their properties since the storm. “I don’t think we know quite yet how many people have just walked away,” he said.

They say they also must find a way to make sure that rebuilding is not cost prohibitive.

"You know, we have residents who went through Hurricane Irene two years ago and they were just paying off their loans from that and then Sandy hit,” Addabbo said. “Now they are being told they have to raise their house ten feet, or pay thousands in flood insurance. We don't want everyone to pack up and leave. We don't want a flight out of southern Queens."

While state lawmakers consider their options for helping them to rebuild, New Yorkers face a barrage of information about where and how they should — and if they should at all. Last week, the federal government released a draft version of new flood maps for the city that show thousands of homes in harm's way. These homeowners could now be faced with prohibitive flood insurance rates.

Mayor Michael Bloomberg issued an executive order Thursday waiving standard zoning rules to allow homeowners rebuilding in those flood zones to build their homes higher and out of range of floodwaters.

The mayor also adopted a new rule to require a minimum flood-proofing elevation — a move designed to make houses safer and to also possibly lower federal flood insurance premiums. Cuomo, for his part, integrated  a plan to buy out residents of shores and flood zones into his budget, saying, “Maybe mother nature doesn’t want you here.”

Both Golden and Addabbo say they have heard from some residents who are interested in the program, but they are also worried about helping those who want to stay.