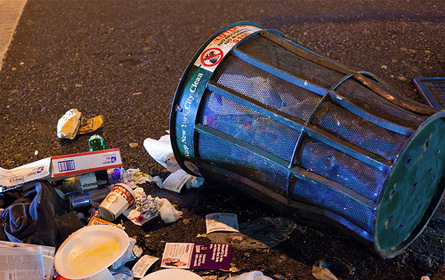 Neat freaks, beware of Brownsville, steer clear of Morrisania and forget about Chinatown.

These are some of the neighborhoods that received the worst ratings for street or sidewalk cleanliness, according to data from the Bloomberg administration's Office of Operations.

To avoid litter-strewn streets stick to Bayside, Queens or the South Shore of Staten Island.

To some of you, these characterizations may come as no surprise.

Gotham Gazette and The Huffington Post asked you to send in photos and tales of nasty neighborhood trash. Many of you said Bushwick, the Bronx and areas of Upper Manhattan were centers of grit and grime.

A review of cleanliness scorecards for the last year and a half corroborated some of your claims. We found poorer neighborhoods afflicted with other environmental challenges were on the lower rung of neighborhood neatness. More affluent areas of the city were more likely to be trash free.

"I live in Spanish Harlem and I am always shocked at the difference in the streets there and those of the Upper East Side. Every morning I get coffee at Starbucks in the UES and see sanitation workers cleaning the streets daily. I only see them about once a week in my neighborhood," wrote one reader, who goes by tiffanykapri. The reader punctuated her message with an unhappy face.

About 93 percent of the streets in East Harlem were considered "acceptably clean" between July 2008 and December 2009. On the Upper East Side, more than 98 percent were.

This tale of trash festers all over the city.

There is the inescapable dog droppings ("It seems that no one cleans up after their dogs," one reader complained).

Or the constant search for a trashcan: "I live in Bushwick, Brooklyn and it is DIRTY! Despite numerous calls to 311 from all my friends and me to have trash cans placed in our neighborhood, we still only have one, which only just appeared about six months ago after years of begging for trash cans," another reader lamented.

One Mott Haven resident, who goes by missyfoosy, complained streets in the South Bronx have more than trash troubles:

"I lived right on Bruckner Blvd, considered the first block when you enter the Bronx from Manhattan. On the waterfront is the NYC Waste Transfer station that just renewed its lease for 99 years; to the north is I-87, which wafts truck exhaust and car fumes right into the neighborhood. Rodent infestations in the abandoned buildings make it impossible to walk the sidewalks at night; they are overrun. There is never enough trash bins nor the collection of that trash."

The community boards in the South Bronx have some of the dirtiest sidewalks in the city, according to data, collected monthly, from the mayor's Office of Operations. The only ones worse are in Bedford-Stuyvesant and Brownsville in Brooklyn.

Bayside, the South Shore of Staten Island and the Upper East Side boasted the cleanest sidewalks.

Street neatness has a similar story. The Bronx's Melrose and Morrisania and Brooklyn's Borough Park scored the nastiest ratings. (For a look at your community board, check out our breakdown.) Again, the South Shore of Staten Island was kept the cleanest.

Community leaders have plenty of explanations as to why their neighborhood may fall on the gritty or gleaming side of the city.

"People are passionate about their communities and people take pride in their community," said Jerry Iannece, the chair of Bayside's community board. "You see them sweeping their streets."

In other, more pungent neighborhoods, leaders say their litter problem could be ameliorated if they had more public garbage cans and if the sanitation department swung by more often. But, said Brooklyn's Community Board 16 District Manager Viola D. Greene-Walker, the problem goes beyond that.

"People, for whatever their reason, would rather instead of disposing their litter in their buildings as they are leaving, just take it outside and put it in front of the building on the sidewalk," said Greene-Walker, whose district includes Brownsville. "'Somebody is going to take care of it.' (It's) that attitude."

The city's Department of Sanitation says it treats every neighborhood equally.

Gotham Gazette requested statistics from the Department of Sanitation on the number of litter baskets per community district as well as the frequency of pick up. The department did not provide the information by the time of publication.

Despite the disparity, New York has seen much worse. Since 1975 the city has been scoring the cleanliness of its streets, and in 1980, 53 percent of them were considered "acceptably clean" citywide -- an all time low.

Last fiscal year, according to the Bloomberg administration, 95.8 percent of streets were deemed "acceptably clean" -- the highest ever.

Even in Bushwick, which one reader called the "neglected underside of Brooklyn," community leaders say there has been a vast improvement.

"If you would have seen it the way it was when it was literally all lots," said Willie Morales, the community associate for Community Board 4 in Bushwick. "Compared to now, it is immaculate."

But that may not be the case for long.

This fiscal year, which started in July and goes to June, the Department of Sanitation has seen successive budget cuts and reconfigured trash routes to make better use of its time and money.

Since those cuts were enacted in July, almost 30 percent of community boards saw a decrease in their street cleanliness ratings.

"Current economic conditions had an impact on the city’s adopted budget," said Dawkins in a statement. "Litter basket collection is a priority and in spite of a painful $80 million budget reduction in fiscal year 2010, we will devote all available resources to servicing baskets in high-density, heavily trafficked areas as often as possible."

This year the department could face an even sharper ax. Cuts to the city in Governor David Paterson's proposed state budget threaten the city's recycling program and its regular refuse pickup. If the governor's plan goes through, the mayor has warned the city would do away with all street cleaning and all public litter baskets.

Those actions would put every community's cleanliness ratings down into the dumps.