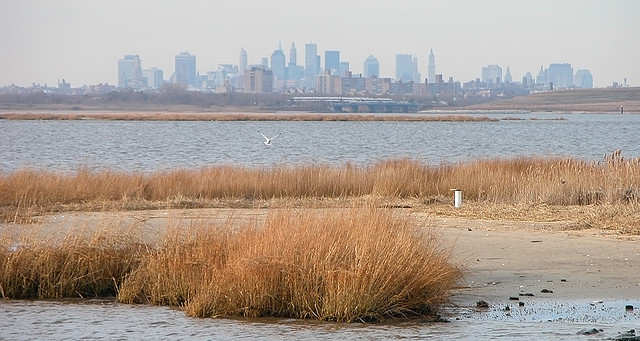 NEW YORK — Jamaica Bay, the city’s largest wetland and open space, could be critical to the ongoing sustainability of the metropolis. The Bay’s marshes help to break waves from major storms and absorb carbon dioxide from the atmosphere. The Bay is also a refuge for hundreds of local and migratory species.

While the Bay was already a focus of the city’s sustainability efforts, the devastation wrought by Hurricane Sandy highlighted the need to maintain and strengthen the city’s natural defenses against rising sea levels.

“Wetlands are among the most biologically productive ecosystems in the world; they also can dissipate the destructive energy of wave action during storm conditions,” Daniel Zarrilli, the city’s director of resiliency, said in an email last week. “Expected sea level rise and the increased frequency of the most intense storms associated with climate change will make this function even more important in the future.”

In recognition of the Bay’s significance, Mayor Michael Bloomberg and Interior Secretary Sally Jewell announced Aug. 12 that a new Science and Resilience Institute will focus on the 18,000-acre estuary. A consortium of academic and other institutions, led by the City University of New York, will conduct research on “resilience in urban ecosystems and their adjacent communities.”

Bloomberg made mention of the Institute in his weekly radio adress on Sunday, saying, “We expect [the] Institute’s work will do a lot to help reduce dangers to our city from future storms, and help other cities around the world confront the challenges of climate change, as well.”

The focus of the research will be the restoration of the Bay and its marshlands and islands. Hundreds of acres of intertidal marshlands in Jamaica Bay have been lost since 1974, and the rate of loss appears to be accelerating, according to the state’s Department of Environmental Conservation. Approximately 40 acres are lost per year. Possible reasons for marshland loss include dredging and erosion, excessive nitrogen and other nutient levels, and sea level rise.

The city also said that a public-private partnership — the Jamaica Bay-Rockaway Parks Conservancy — had been created to “raise funds for the planning and development of the Jamaica Bay-area parklands and waters.”

The conservancy will be chaired by billionaire Thomas Secunda, the global head of Bloomberg Financial Products and Services and one of the founding partners of Bloomberg L.P. Secunda chairs the National Parks Conservation Association. The conservancy board is to include representatives from nonprofits, such as former Parks Commissioner Adrian Benepe, now with the Trust for Public Land.

As the city confronts the growing impacts of climate change, planners are taking a deeper look at the the city’s relationship with its natural environment. Technology and hard infrastructure will be able to mitigate the effects of climate change to a certain extent. But natural systems will also play a large role in protecting the city, and making it livable as conditions become more extreme.

As much as Jamaica Bay can provide coastal protection and a link to nature for New Yorkers, it is also one of the city’s connections to the global ecosystem. According to the city’s Department of Environmental Protection, the Bay is a “critical” stopover area for birds on the Atlantic flyway, an “avian superhighway” stretching from Canada to Mexico.

Jamaica Bay is also a stop for migratory butterflies, like the monarch, and supports other seasonal and year-round species like the piping plover, osprey, peregrine falcon and seabeach amaranth.

Zarrilli said the Institute will play a “central role” in advancing many of the initiatives detailed in the city’s climate change resiliency plan released in June.

“The Institute will have the scientific capabilities to provide research and analysis of many of the phase 1 coastal protection initiatives,” he said. “Our plan specifically calls out the study of innovative coastal protection techniques.”

Zarrilli said that research at the Bay would allow the city to understand the efficacy of its resilience planning going forward.

“The basic premise of using natural protections such as wetlands requires more in depth study to understand the exact parameters where those measures work best,” he said. “Successful evaluation and monitoring of our phase 1 initiatives can lead to further expansion of specific coastal protection techniques.”

Study and restoration of the Bay and its marshes will also provide valuable information on the sustainability of local ecosystems. The American Littoral Society, a nonprofit organization that works to protect coastal habitats, has called the Bay “the most intact remnant of what was once a thriving estuarine ecosystem throughout the city” despite pollutants.

Home to 91 species of fish and 325 bird species (62 of which breed locally), the Bay is also “an important habitat for many species of reptiles, amphibians and mammals, ” according to the city’s DEP.

It is also part of the greater Gateway National Recreation Area, which encompasses some 26,000 acres in New York and New Jersey.

Avrin said that the Bay’s marshes — beyond offering protection from storms and absorbing carbon from the atmosphere — also provide a nursery area and food source for fish, such as flounder and bluefish.

He said the marshes in the Bay and around the country have been deteriorating for reasons that remain undeterermined.

“Marshes have to be able to respond to sea level rise—they are restricted to the amount of water they can tolerate,” he said. “How are all the marshes in the world going to respond? In a normal situation, marshes retreat upland. [Here] there is no option. They cannot retreat. That is the kind of research that will happen at this Institute.”

At least 150 acres of Jamaica Bay’s marshland have been restored over the last eight years, but Avrin said there was “a long way to go.”

Avrin maintained that Jamaica Bay — while “operating fairly well” — feels the ongoing impact of its location next to a huge metropolitan area. He said that at least four wastewater treatment plans currently release effluent into the Bay’s waters. The area is also the planned site for a natural gas pipeline project, which will extend from the Rockaway coast, underneath the Bay, and into Brooklyn. Construction on the cross-Bay lines began in March.

Last October’s hurricane also took a toll on the ecosystem. Residents reported that large amounts of fuel oil and debris entered the Bay as a result of the storm, and that two freshwater ponds were breached. The Rockaway coastline — which shields the Bay — was slammed by a 14-foot storm surge.

The Science and Resilience Institute will be formally established by the fall, with a temporary location at Brooklyn College.