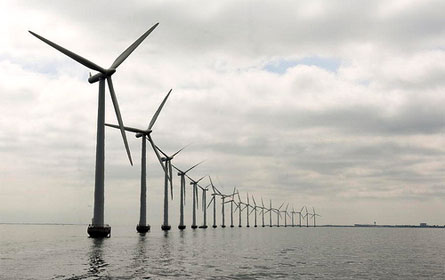 UN Photo/Eskinder Debebe
The Middelgruden wind farm off Denmark's coast has been supplying Copenhagen with energy since 2000. Now efforts are underway to bring offshore wind famrs to the East Coast, including New York.

Since April, New Yorkers have watched two environmental disasters in two different parts of the country with sadness and horror. On April 5, an accident at the Upper Big Branch coal mine in West Virginia killed 29 people. And, on April 20, 11 people died in the Deepwater Horizon explosion -- a disaster that has sent as much oil spewing into the Gulf of Mexico every four to five days as was spilled in the Exxon Valdez accident of 1989. Both these events provide potent reminders of the dangers and risks of our addiction to fossil fuels to power our vehicles, homes and businesses. If New York needed a wake-up call for cleaner energy sources, these two accidents should ring our alarms loudly and clearly.

Amid this flood of disastrous environmental news, one piece of progress was reported on April 28. On that date, the U.S. Department of Interior approved the first-ever, utility-scale offshore wind energy project -- the Cape Wind project in Nantucket Sound -- after a nine-year federal review process. This process lasted longer than anybody expected, but was necessary to ensure that the groundbreaking project would properly protect the marine habitat while effectively harnessing the renewable wind available at the site.

In contrast with West Virginia's coal and the Gulf of Mexico's oil, wind power is a renewable resource that can reduce the carbon dioxide emissions that cause global warming. Unlike burning coal in power plants or using oil to power our vehicles, wind farms do not emit particulate soot, nitrogen oxides, and other toxic pollution that triggers asthma emergencies, cancer, heart attacks and premature deaths. And of course, wind power is free of the environmental destruction that follows when things go wrong in the fossil fuel exploration business.

New York is one of the leading states for wind power in the nation --- and its growth is just taking off. As of the end of 2009, existing projects contributed 1,274 megawatts of capacity to our power grid, ranking New York eighth in the nation in terms of existing wind energy capacity. Perhaps most significantly, roughly 850 of these megawatts have come online in the last two years.

Upstate New York's wind projects are much smaller than Cape Wind or a typical coal-burning power plant â€“ they range from 20 to 126 megawatts, in contrast to the 420 megawatts planned for Cape Wind and the 667 megawatts generated by the typical coal plant. In order for wind power to replace a significant amount of fossil fuel energy, New York's nascent wind industry has to move toward utility-scale projects on the scale of Cape Wind and other projects that have been proposed elsewhere along the eastern seaboard.

The concept for the offshore wind project emerged from Gov. David A. Paterson’s Renewable Energy Task Force and is consistent with the governor’s “45 by 15” program, which set a statewide goal that the state must meet 45 percent of its electricity needs through improved energy efficiency and renewable sources by the year 2015.

The group is considering a wind project that would generate up to 350 megawatts of power initially, building up to 700 megawatts. At this scale, the project would be the largest offshore wind project in the country --- and would remove carbon dioxide gases equivalent to removing 68,000 cars from our region's roads annually. Operating at 30 percent of its capacity, a 700 megawatt project would generate enough energy for a half million homes.

Like Cape Wind, the path to developing this project will be filled with many procedural steps. In June 2009, the project's sponsors issued a “Request for Interest” that sought to gauge industry interest in the project. The responses to that request now are being used to create a “Request for Proposals” (RFP) that should be released soon. At that stage, New Yorkers will get a clearer sense of the exact location, cost and other details of the various proposals that will be considered. A joint Long Island Power Authority/Con Edison feasibility study has already concluded that, with upgrades to their existing transmission systems, the project could connect to up to 700 megawatts of offshore wind power to the power grid . Toward that end, an application to “interconnect” the offshore project has been filed with the New York Independent System Operator, the operators of the state’s power grid, to supply up to 700 megawatts by 2015.

By itself, wind power -- whether utility-scale offshore projects or generated in smaller projects upstate -- will not be sufficient to wean ourselves from our addiction to dirty fossil fuels. Combined with cleaner, more efficient power plants; increased efficiency in our buildings, appliances, and vehicles; and as part of an array of renewable fuels that includes increased solar power and advanced biofuels, wind power can be a significant part of our long-term climate and energy solution. As we continue to watch the Deepwater Horizon disaster unfold and learn more about the dangers and risks of coal mining and coal-fired power plants, the potential benefits of each of these strategies need to be explored fully.