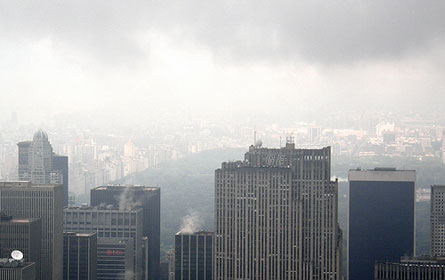 It has been a great summer for anybody who sells ices on the street, repairs air conditioners, or enjoys a run through a park sprinkler. For New Yorkers who sweat their way through the hot days, though, it’s been struggle since the start of spring. That is because, this year, New Yorkers have lived through the hottest spring and summer on record. From March to June, we saw four consecutive months that broke their all-time record for average monthly temperature, according to the National Oceanic and Atmospheric Administration.

And July came close, only avoiding the mark thanks to an unseasonably cool final day that dropped the average monthly temperature in the city to 81.3 degrees, just one-tenth of a degree cooler than July 1999, the reigning hottest July on record.

Weather reporters tend to focus on the temperature readings, but hot weather also brings spikes in levels of ground-level ozone, more commonly referred to as smog. That's because ground-level ozone forms when volatile organic compounds (mostly hydrocarbons) and nitrogen oxide gases mix in sunlight. When there is more sunlight and temperatures rise higher and higher, the ozone reaction speeds up, creating more and more ozone. (By the way, ground-level ozone is different than stratospheric ozone, which helps shield the Earth from dangerous sun ultraviolet rays).

Breathing too much ozone can trigger or worsen a wide range of serious health problems in the short term, including asthma emergencies, bronchitis and emphysema. For some people, inhaling high levels of ozone can lead to chest pain, wheezing, throat irritation, and congestion. Over the longer term, repeatedly breathing the levels of smog we have in New York City can reduce lung function and permanently scar lung tissue.

Children, the elderly, people with lung disease and people who work or exercise outdoors are all at greater risk than the general population.

New York City has never met the federal health standards for ground-level ozone. These standards are set periodically by the U.S. Environmental Protection Agency, and are designed to protect both public health and public welfare (crops and vegetation, for example). The federal government sets two ozone standards -- the "one-hour" standard is designed to protect people from short-term spikes in ozone levels, and the "eight-hour" standard is intended to protect us from more chronic exposure to ozone.

Certainly, cars, trucks and industrial pollution sources are cleaner than they were 40 years ago when the first Clean Air Act was passed. But as our understanding of the health impacts of ozone has increased, the health standards set by the U.S. EPA have become more stringent.

The agency’s AirNow website includes a public awareness program that informs the public about pollution levels in real time and provides daily forecasts of expected pollution levels and historic information about past pollution levels. On the website, the EPA index system rates ozone -- and particulate matter as well -- from a scale of 1 to 500. An Air Quality Index value of 100 generally corresponds to the national health standard for the pollutant. An Air Quality Index rating of 50 is considered to be "good" air quality that has little potential to affect public health. At 300, the agency considers the air to be "hazardous" to breathe -- so polluted that everybody is at risk and serious enough to trigger public warnings about emergency conditions. In other words, when the Air Quality Index is below 100, EPA believes that the air is generally clean enough for all New Yorkers.

EPA declares an Air Quality Alert day whenever Air Quality Index levels of ozone or particulate pollution exceed 100. When the Air Quality Index is between 101 and 150, EPA considers the air to be "unhealthy for sensitive groups." Although the health of the general public is not expected to be affected in this range, people with lung disease, older adults and children are at a greater risk from exposure to ozone, while particulates in the air pose a greater hazard to persons with heart and lung disease, older adults and children. People in these risk categories are advised to avoid prolonged outdoor exertion when the index is above 100.

As Michael Seilback of the American Lung Association in New York said, “For the hundreds of thousands of New Yorkers who suffer from asthma and other lung disease, these high levels of ozone could make it difficult to breathe and could even lead to hospitalizations or death.”

New Yorkers who are concerned about the potential health impacts of breathing high levels of ground-level ozone should avoid prolonged outdoor exertions when the heat and pollution levels are high.

It is easy for concerned New Yorkers to keep up to date with the air pollution levels and forecasts in their community. By subscribing to EnviroFlash, New Yorkers can get a free daily email with up-to-date pollution information for their ZIP code. Calling the New York State Department of Environmental Conservation's air quality hotline at 800 535-1345 also will provide localized air quality information.

Hot summer days are also a good time to remind ourselves of the policy steps that our elected leaders and government officials can take to reduce summertime ozone levels in years to come. In Washington, EPA is expected to announce its new national eight-hour standard for ozone by the end of August. The agency is considering a range of ozone levels below the current standard, and setting the most stringent standard will be especially important. That is because the new standard will trigger revised state-level requirements to develop additional programs to reduce pollution levels to meet the new standard.

If we are ever to escape from the trends of ever-hotter and more-polluted summers, it will be critical for Washington to take positive action on these necessary policy steps, and for New York to adopt a plan to finally meet EPA’s health standards for ozone, once and for all.