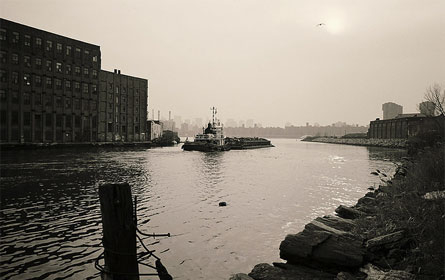 Photo by Astoria4u
The clean up of Newtown Creek (above) would be in jeopardy if New York withdrew from the federal Superfund program.

"Pete Grannis was fired by Gov. Paterson because he had unpleasant news about what his planned cuts would mean to the state," said River Keeper executive director Paul Gallay.

Many activists and others agree. When Gov. David Paterson fired Department of Environmental Conservation Commissioner Pete Grannis in late October, after a memo leaked detailing how cuts would prevent the agency from protecting the environment, legislators and environmental activists joined together to denounce the move and praise Grannis' long service. Grannis denied leaking the memo.

"They shot the messenger," said Gallay.

While controversy over the firing still rages, advocates say the focus must now shift to the agency itself and if it can protect New Yorkers and the environment with cut after cut. "We need to move on and focus now on the memo and what it says about this agency's ability to function," said Laura Haight, senior environmental associate for the New York Public Interest Research Group.

According to the memo, the Department of Environmental Conservation may no longer be able to carry out the most basic of its functions.

The DEC had about 3,775 workers to start 2008; since then 260 staffers left under an early retirement program. and 150 more could soon be handed pink slips. Staffers from scientists in wildlife labs to office workers and site inspectors have left their jobs leaving the agency understaffed.

According to the unsigned memo, the DEC will not be able to properly staff cleanup sites, monitor natural gas drilling in the Marcellus Shale, make sure polluters keep up with state standards and manage wildlife at parks. Environmentalists say the crippling of the agency hurts business too.

"There will be huge delays in licensing. They (the DEC) aren't staffed to do permitting anymore," said Marcia Bystryn, executive director of the League of Conservation Voters. "Businesses need them before they can start projects, and in this financial climate, time is money -- the delay could kill development across the state."

Gallay agrees that the DEC's current situation could be bad for New Yorkers, the environment and business. "Industry wants a prompt response. Having low staff at the DEC hurts good businesses," he said. "The only people that benefit from lax regulation are bad businesses, and that hurts the businesses that are doing the right things. People think industry wants weak regulations. They don’t want weak, they want responsive, they want people to work with." According to Gallay, industry is going to have a hard time finding any sort of response from the DEC. Other environmental groups say that cleanup projects have been abandoned because the department doesn’t have enough staff to work on procuring project grants.

Grannis was perceived to be unafraid to speak out about what the cuts would mean for the state -- he is close to many legislators because of the years he spent as a member of the Assembly. Albany Assemblymember Jack McEneny called Grannis to tell him, "You are my hero" after the firing. Albany State Sen. Neil Breslin described Grannis as "the brightest person I know in state government."

Controversy over the firing still rages -- Grannis is so popular that legislators have been lead to speculate that his firing was part of the "dirty work" Paterson has undertaken as a favor for Andrew Cuomo to make things easier when the governor elect takes charge. They think Paterson is making unpopular moves for Cuomo because as a lame duck he has nothing left to lose.

Others openly wonder if Paterson fired Grannis or if the move was made independently by top Paterson aide Larry Schwartz. The Times Union, which first broke the DEC memo, reported that Schwartz phoned Grannis demanding he resign because the memo leaked. Grannis reportedly refused and demanded to speak to Paterson. Schwartz refused and then fired him. "Who exactly is running the state?" asked McEneny. "Schwartz or Paterson?" The Assembly plans hearings later this month.

Some activists and legislators want Cuomo to reappoint Grannis.

Beyond Grannis' firing and the cuts at the DEC, Paterson has proposed withdrawing New York from Superfund projects to clean up toxic sites. Discussing the cuts in a radio program on Oct. 28, Paterson said, "In DEC there will be job losses of approximately 150. This will cause us to reduce some of the services that we have. We’ll have to close a few educational programs, we will eliminate the state participation in Superfund. In other words where the federal government is conducting superfund activities, the state will not be involved."

The federal Environmental Protection Agency oversees Superfund projects across the nation, and whoever polluted the site is supposed to cover the cost, but the state pitches in 10 percent of the cost of the projects if the polluter can’t be found. In New York, state DEC staffers familiar with the cleanup area help the EPA adjust its plans to specific local concerns. No state in the union has ever withdrawn from the Superfund program.

Two long polluted sites in the city -- the Gowanus Canal and Newtown Creek -- are slated for clean up under the Superfund program. There are 114 Superfund sites in the state. What a state withdrawal would mean for these clean ups is unclear. An EPA spokesman said the agency had not received any proposal from the state and therefore could not speculate on what it would mean.

In fact, Paterson's proposal strikes some environmentalists and legislators as so outlandish that they do not take it completely seriously. "I'm not sure if it is a negotiating ploy, being used as a bargaining chip or what," said Bystryn. "I am certainly optimistic that they won't do this. We would be the first state in the nation."

But Gallay has a different take. "There is no sense in talking about bargaining chips when you have public health and safety at stake. These sites need funding. Some of these sites have been turned into recycling centers or receive other new investment after the cleanup. It helps the local economy. It is essential that the DEC stay involved. The feds have their plans and do a good job, but it is important to have the local office involved," he said.

As to how a withdrawl might work, Yancey Roy, spokesperson for the DEC, explained in an e-mail, "Typically speaking, EPA is the lead agency on federal [Superfund] sites and the state provides assistance/consultation. Often, this involves the state assigning a project manager to stay up to speed on the site, review test results and provide consultation, support and a state perspective. When warranted, DEC has assigned more than one person to a cleanup." In other words DEC staffers would no longer participate.

Gallay, who worked for the DEC, said that during his time there he saw how agency representatives from local offices familiar with the community near the site were able to help "get the right kind of cleanup for the community."

Laura Height of NYPIRG said that Paterson’s proposal flies in the face of logic. "Opting out of the superfund program makes no sense," she said. If the state needs money, she said it could apply for federal management assistance grants, such as the one it now has for the clean up of PCBs in the Hudson River But, she said, the state has not done this. "I don’t know if it is because they are short staffed or what," she added.

Environmental advocates are united in their disdain for the way Paterson has dealt with the environment during the budget crisis, but they do not agree about what they can expect from the incoming Cuomo administration. Gallay estimates that most other agencies have faced about 8 percent cuts in their budgets; he said the DEC faces over 20 percent worth of cuts.

"During hard times we want a strong leader who can make smart, careful cuts. It is all going to hurt, but you want the cuts to be thoughtful. Paterson has not done that. He has made stupid cuts that have backfired on him," said Height.

Bystryn said she is ready to look ahead. "I'm not sure the environment was ever a major concern for Paterson, but Cuomo went to the trouble of putting together policy books which represent parts of an environmental agenda. He also went out of his way to seek our endorsement, and he didn't do that with everyone." Bystryn said she expects Cuomo will consult with her on the DEC budget come January.

"The state is nearly bankrupt, there are clearly going to be cuts, but we need to review each agency and find out what the core mission is and then make sure they are fully staffed to carry out that mission," she said. "I think the DEC's main mission is to protect New York's air, water and environment, and we need to make sure it is more than adequately staffed to do that."

Gallay said he has great hopes that the Cuomo administration will correct what he sees as Paterson's misdeeds. "All this governor has done is pour gas on the fire. I have every hope that Gov. Cuomo will administer his environmental agenda. He is a goal oriented man, and he published his environmental agenda, and he is not the kind of guy that wants to miss his goals. To meet them I think he will have to properly fund the DEC."

Cuomo, though, has gone on the record supporting layoffs at the DEC. He has also taken an open stance on "hydrofracking" to extract natural gas from the Marcellus Shale. His "Cleaner, Greener NY" environmental agenda says he supports drilling, but only if it is safe. Environmentalists take that to mean that Cuomo would allow the drilling with DEC oversight, as well as with safeguards to insure the process will not pollute surrounding water supplies.

His statement also supports improving standards for the clean up of brownfields, partly contaminated former industrial sites, and backs tougher clean air standards. "The state is well served by enacting regulations to address climate change," the Cuomo campaign wrote. "Statutory standards provide certainty to industries and investment will follow." That again indicates to environmentalists that Cuomo supports staffing the agency that oversees polluters.

In its response to Cuomo"s "Cleaner, Greener NY," Environmental Advocates of New York praised a number of Cuomo's stances but its executive director, Rob Moore, closed with this:

"In the wake of the sudden dismissal of Department of Environmental Conservation Commissioner Pete Grannis on Oct. 21, â€Cleaner, Greener NY’ may underestimate the mess that the next governor inherits at the DEC and the state's other environmental agencies. ... Over the last few years, New York's environmental agencies have been decimated. Many aspects of the 'Cleaner, Greener NY' agenda will be impossible to implement without a significant re-investment in the agencies and an aggressive rebuilding effort. The success or failure of the Cuomo campaign's agenda depends on a commitment to rebuild these agencies."

Height said she does not want to wish anything tragic on New York, but she is concerned that. as the DEC becomes less effective, conditions are developing that could lead to real environmental disaster. "The BP oil spill happened when people were asleep at the switch," she said. "We know the agency is already too short staffed to monitor polluters, so we are trusting polluters to follow the rules, and that is dangerous when it comes to public health and safety."