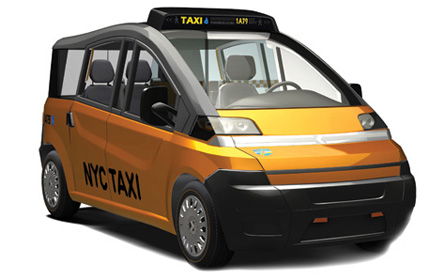 Despite a call to bring the city's cab industry into the future, yellow taxis aren't going as green as some would hope.

Within a month, the city will select a new model for its 13,000-strong iconic taxi fleet -- the last step of a more than yearlong competition titled Taxi of Tomorrow. No matter which of the three remaining vehicles the city chooses, the selection might make the city's cab convoy less fuel efficient than it is on average now.

Currently, the city's taxi fleet is one-third hybrid and two-thirds, gas-guzzling Crown Victorias courtesy of the Ford Motor Co. The majority of the city's hybrid fleet are Ford Escapes, which average 34 miles per gallon during city driving. In total, including hybrid vehicles, the city's fleet has an average of 22 miles per gallon.

Under the competition, the city will choose one vehicle and phase out the rest of the fleet -- including hybrids. The contract would span 10 years, and officials estimate it will be worth $1 billion.

At least one of the vehicles under consideration by the Taxi and Limousine Commission, the Ford Transit Connect, gets only 21 miles per gallon during city driving. The commission would not reveal the gas mileage for the other two vehicles under consideration nor would their respective companies: the Nissan NV200 and the Turkey-based Karsan. A diesel version of the Nissan is used in Europe, but the Karsan is still in development. None of the options are manufactured in the United States.

A spokesperson at the U.S. National Renewable Energy Lab, said the agency did not keep records of foreign vehicles' fuel economies.

"If they go forward with one of these three finalists, it’s a step backward at least in the short term for fuel efficiency and tailpipe emissions," said Mark Izeman, director of the New York urban program at the Natural Resources Defense Council.

The competition culminates a protracted battle between the Bloomberg administration and the taxi industry. Ultimately, environmental advocates say, the administration is on the losing side.

For its part, the city blames Washington.

In February, the U.S. Supreme Court refused to hear a case that struck down city-based incentives to encourage the taxi industry to purchase greener and cleaner vehicles. Under the now-defunct regulation, the city would financially penalize taxi owners if they failed to purchase hybrid vehicles.

The policy attempted to make good on Mayor Michael Bloomberg's commitment to create a cab fleet with a fuel efficiency greater than 25 miles per gallon. The proposal was a major tenant of Bloomberg's environmental agenda -- otherwise known as PlaNYC 2030.

The courts said the incentives amounted to a mandate and argued only Congress has the power to regulate fuel efficiency.

"Obviously we wanted to build fuel efficiency into the Taxi of Tomorrow, and would have done so if we were not limited by the interpretation of the statue," said Allan Fromberg, a spokesperson for the Taxi and Limousine Commission.

Despite the setback in court, city and federal officials are still attempting to regulate fuel efficiency in the Big Apple.

On Monday, Sen. Kirsten Gillibrand, Bloomberg and Rep. Jerrold Nadler said they would introduce legislation in Washington to allow cities to regulate their own taxi industry's fuel efficiency. The same legislation was introduced in 2009, but failed to gain traction. Cities like Washington, DC, Las Vegas, Boston, San Francisco and Los Angeles have signed on in support of the measure.

While championing the mayor's commitment to fuel efficiency standards, some environmental advocates question whether there is the political willpower to actually get it done on Capitol Hill.

And even if the legislation were to move forward this session, it's unclear whether a potential Taxi of Tomorrow contract, which is locked in for 10 years, could be modified to meet higher fuel efficiency standards.

Taxi for the 21st Century

Some of the models under consideration -- all of which resemble a more modern minivan -- hope to eventually phase in cleaner cab versions, according to the Taxi and Limousine Commission.

Fromberg said Nissan hopes to make their model eventually entirely electric. Before that could occur, the city would have to establish infrastructure for taxis to go to charging stations instead of the pump.

According to its promotional site, Karsan can be "quickly and cost-effectively modified to conform to the city’s preference for electric, compressed gas, hybrid or other advanced power system."

But those who have battled the Bloomberg administration's taxi policy -- including The Metropolitan Taxicab Board of Trade, who represents taxi company owners -- say fuel efficiency should take a back seat to other more important amenities.

"As operators we have to have safety and durability and affordability," said Michael Woloz, a spokesperson for the board. "That’s our main concern."

Earlier this week, the taxicab board filed another motion in federal court to compel the city to allow companies to purchase the Ford Transit Connect now. Woloz said selecting one cab model would crush competitive prices, because one manufacturer would have exclusive rights to the New York City taxi market. Woloz said he wouldn't be surprised if the city backed out of the competition altogether.

"The Taxi of Tomorrow is far from a sure thing," he said.