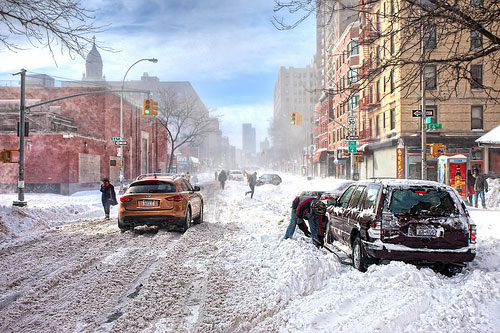 In response to the storm of criticism on the Bloomberg administration's response to last year's Boxing Day blizzard, the City Council approved a package of legislation Wednesday that outlines how the city should act in future snow emergencies.

The legislation caps off a round of public hearings hosted by the council, one in every borough, where New Yorkers shoveled out complaints over how slow the city was to plow streets and provide emergency services after the snowfall.

Council Speaker Christine Quinn said the package, which was approved almost entirely unanimously, would ensure the city was prepared to deal with another weather disaster.

"New Yorkers deserve and should expect a prepared city government," Quinn said. "We can't assume these things are going to happen."

When the legislation was first introduced, the Bloomberg administration criticized the proposals, arguing it needed its emergency regulations to be flexible. On Wednesday, however, a Bloomberg spokesperson said the mayor would support the measures.

The administration said it had worked with the council on the package, and attributed its reversal to revisions made to the proposal. For example, the council abandoned a requirement to force the city to suspend parking meters during snow emergencies.

The December blizzard dumped 20 inches of snow on the five boroughs and left streets unplowed, particularly in the outer boroughs, for more than three days. The city's 911 call system was overwhelmed and ambulances were blocked from responding to emergencies.

Since the snowfall, the mayor's approval rating has plummeted to an eight year low. Most New Yorkers, according to a recent Marist College poll, believe the city is heading in the wrong direction. The city's slow snow response is credited with much of the Bloomberg bad sentiment.

Under the package, the city's Office of Emergency Management would have to release an annual report evaluating the city's snow response. The office will also have to create formal protocols for weather emergencies that would outline when it should perform what duties and what would prompt a request for state aid.

Another bill will require the Department of Sanitation to create borough-based snow removal plans. As part of that proposal, the city will have to identify which streets get plowed when.

"People living on these streets will have a say," said Councilmember Jimmy Vacca, the chair of the Transportation Committee. "We're shedding light where there was none."

The city will be required to create a registry of snow removal volunteers and post what services are suspended online. The package also mandates the establishment of high-volume protocol for the city's 311 system, which would include the creation of a system to track complaints. Councilmember Gale Brewer abstained on both of these bills, arguing the policies didn't require legislation.

Every other bill was approved unanimously.

The council also called on the state to simplify the process for the city to use volunteer and private ambulances during emergencies.

In addition to the legislation, the Bloomberg administration and the council announced an agreement to force the company's snow removal contractor at bus shelters, Cemusa, to report to the Department of Transportation on its progress during storms. Originally, the council had proposed rescinding Cemusa's contract and requiring the Department of Transportation to remove the snow.

At least one councilmember argued the council was being too light on the administration.

"The mayor and the commissioner got away," said Councilmember Charles Barron.

Soaking up the Sun