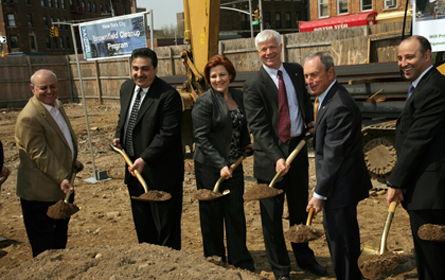 Photo by Edward Reed
Mayor Michael Bloomberg and City Council Speaker Christine Quinn were among the city officials participating in a ceremonial groundbreaking at a Williamsburg brownfield last month.

On the Monday before Earth Day 2011, at a well publicized press event, Mayor Michael Bloomberg and other high-ranking city officials broke ground on a market-rate housing development in south Williamsburg. New luxury rentals in Williamsburg are hardly news these days, but this one is unprecedented. Its developer received funding from the country's first city-funded brownfield program, brought to you by PlaNYC 2030.

Back in 2007, PlaNYC 2030 estimated that there were more than 7,000 acres of brownfields, or vacant or underutilized sites that are likely contaminated with toxic chemicals (such as old gas stations, factories and dry cleaners) across the city's five boroughs. Not only are these sites eyesores, but because developers are reluctant to take them on, they hamstring neighborhood revitalization.

Until now, the city has relied on federal and state funding for brownfield development. But PlaNYC called for the city to establish its own brownfield program, and it set a goal of redeveloping all 7,000 acres by 2030. According to the PlaNYC 2030 update, released last month, the city will distribute $10 million over the next few years to help developers pay for brownfield redevelopment, especially in low-income areas.

However, as brownfield programs in other parts of the country come to fruition, some question how much they actually serve low-income communities in the long-term. An independent study conducted in 2010, for instance, found widespread gentrification and displacement in conjunction with brownfield projects across six of the federal Environmental Protection Agency's ten regions. Will the city be able to build a better brownfield program?

How the Programs Work

The Clinton administration launched its brownfield initiative in the mid 1990s to much applause. Under the program, the Environmental Protection Agency provides funding to local governments to encourage property owners to redevelop contaminated urban properties, especially in low-income neighborhoods. Since then, many states have followed suit with their own brownfield programs. New York state, for instance, began offering technical and financial assistance, as well as liability relief, to brownfield developers in 2003. Extra assistance is available to municipalities or community development corporations that wish to address areas with multiple brownfield sites (known as "Brownfield Opportunity Areas," or BOAs).

Cracks in the Concreteby Anne Schwartz: The Bloomberg administration not only wants a greener New York, it wants a more permeable one. A look at how green infrastructure could cut costs and clean city waterways.

But the state's program recently came under scrutiny when the watchdog group Environmental Advocates found that the vast majority of projects claiming brownfield tax credits between 2008 and 2010 were located in predominately white, middle to upper class areas "Most of the tax have gone to high end developments (and many in Manhattan) where the credits were not necessarily needed and where the benefits accrue to already wealthy developers and land owners," a New York-based brownfield project consultant confirmed.

This is partly because only heavily contaminated sites qualified for the incentive. Most non-profit groups could not deal with such complicated and costly cleanups and so were ineligible for the funding. Since 2008, New York state has been trying to rectify that problem by offering technical assistance and other support to community development organizations wishing to redevelop brownfield sites.

New York City's program, which launched in August 2010, seeks to bolster the state's program and boost brownfield development across the five boroughs. The Brownfield Cleanup Program, or BCP, administered through the new Office of Environmental Remediation targets sites with low to moderate levels of contamination and offers a number of incentives to both for profit and non profit developers.

Close examination of the program suggests that the innovation might stop there.

According to Office of Environmental Remediation documents, in addition to cleaning up contaminated sites, the program is meant to "increase job creation in affected communities, add local amenities and generate new revenue." To enroll in the program, developers must have conducted preliminary site investigations and have plans for remediation and redevelopment as well as for ensuring community protection and participation. These include making certain documents publicly available (either online or at local libraries), soliciting public comment on the remediation work plan, and notifying the public at the start and completion of remedial action.

There are no stipulations for the intended uses of these sites, as long as the site is certified as safe for the environment and human health and has received all required city and state building permits. Brownfield projects, then, do not necessarily need community board approval.

Finally, enrollees are "strongly encouraged" to include statements outlining sustainability efforts such as green building design, energy efficiency and reducing waste production. Once accepted to the program, developers pay a $1,000 fee to the city and sign an agreement that they will adhere to the work plans outlined in their application. On successful completion, enrolled projects receive a release from environmental liability from the city and they are entitled to a Green Property Certification.This acknowledges that the site, when put to its intended use, will fully protect public health and the environment. These certifications are issued automatically, regardless of the project's Sustainability Statement, which is requested, but not required, as part of the Brownfield Cleanup Program application.

To help fund these projects, the city offers Brownfield Incentive Grants, called BIGs. These include technical assistance grants to help community-based organizations apply for the state's brownfield program. BIG grants can also provide matching funds for the state program, or cleanup and investigation grants of up to $60,000. On top of that, "Preferred Community Development Projects," or those that provide specific community benefits, such as open space, affordable housing or community health care facilities, can receive bonus funding of up to $50,000. According to the PlaNYC 2030 update, the BIG program has paid out or earmarked $800,000, $76,865 of which as gone to supporting four community development organizations that are developing state-designated BOAs.

As of the release of the update, six projects in the Brownfield Cleanup Program had broken ground. Three of those are considered preferred development projects.

Despite the glowing report provided in the PlaNYC update, a close look at these initial projects begins to reveal some tarnish. Of the three preferred projects to break ground, only one is spearheaded by a long-standing non-profit organization. That project, led by the South Bronx's Nos Quedamos, will create 110 units of housing affordable to families earning up to a maximum of 60 percent of the Area Media.

The other three projects are more problematic. For instance, Jiten Hotel Management received a bonus of $75,000 to build a six-story hotel (rumored to be a Fairfield Inn) near Yankee Stadium. Based on the project's preferred status, Jiten also received a low-interest cleanup loan from the Bronx Overall Economic Development Corp. to build the hotel. According to the update, the hotel qualified for bonus funding because "BOA community planners" strongly supported it.

Apparently, those planners did not include the local community board. In fact, Bronx Community Board 1 chair George Rodriguez claimed that the developer never met with the community board. "I'm not against a hotel," Rodriguez told the Bronx Times. "But people from the community should be involved, those of us who didn't walk away when the Bronx was burning." Others have expressed skepticism that the hotel will deliver the 60 permanent jobs that were an important part of its winning preferred status.

A second preferred project has also gotten flack. 1600 Pelham Parkway South in Eastchester, a former commercial site that contains industrial contaminants, is slated to become 91 units of affordable housing. The city, though, has not specified how it will define "affordable," and some local residents are fairly certain that the homes will be affordable only to middle-income families. Some other residents of this long-standing middle class neighborhood have complained that the towers will be unsightly, while still others worry about over-crowding.

One resident said to the Bronx Times, "It's over-development. ... There's no infrastructure to support the residents."

Community Board 11members agreed -- when the project was first proposed in 2008, they voted not to support it because of concerns about already overstrained infrastructure and schools. The project, though, is still moving ahead. Perhaps the problem is that the "preferred project" designation requires support letters from organizations verifying that the project will benefit the neighborhood, but the city does not specify how many letters or what types of organizations should submit them.

The remaining three projects to break ground are considered part of the general brownfield cleanup program, and they do not have preferred status. These are a Church of Scientology on 125th street in Manhattan on a former industrial site, a 168-room Hyatt Place hotel with three levels of retail and space for underground parking in downtown Flushing and a mixed use residential and commercial building in the South Bronx, and the market-rate apartment complex in south Williamsburg that provided the Earth week photo op.

That project has already come under fire from the local City Councilmember Diana Reyna. A spokesperson for Reyna told the Brooklyn Paper, "This district doesn't need another market-rate residential project, and we're not happy that it does not include any open space. â€¦ That's what the community wants. This project is not going to do that."

At the groundbreaking, though, Reyna praised the project for spurring redevelopment and creating jobs.

Based on its early days, the city's brownfield program seems to be experiencing the same problems affecting brownfield programs across the country. In other words, they seem to be a mechanism for subsidizing development aimed at tourists and affluent residents. Moreover, the city's program includes a vague and toothless public process that can all but ignore community concerns.

Does it have to be this way? It is not to late to ensure that brownfield projects emerge from a deliberative public process, that benefits are evenly distributed across the city to a wide range of citizens, and that they are truly sustainable. The city can re-boot.

First, "Green Property Certifications" are misleading and hint at greenwash. Projects so designated ought to go beyond certifying that sites are no longer toxic and include measures similar to those required of LEED buildings, which must meet specific criteria for being green.

Second, the city might integrate its landmark brownfield program into existing community-developed plans known as 197-a's. Many of these contain carefully constructed visions of equitable economic development but are gathering virtual dust on the hard drives of community board members across the city.

Melissa Checker is associate professor of urban studies at Queens College, CUNY and of anthropology and environmental psychology at the CUNY Graduate Center.