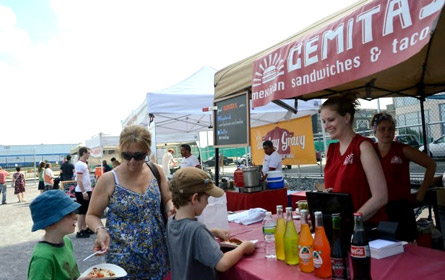 Photos by Julia Vitullo-Martin
Danny Lyu makes Mexican sandwiches at Entrepreneur Space in Queens and sells them at the Smorgasburg in Brooklyn.

Yet even as brand-name, commercial companies were moving out to the drumbeat of apocalyptic headlines, a food revolution had started and today continues to transform the rules and the dynamics of New York's $5 billion food processing industry.

All over New York (and in other cities as well), well-educated, energetic young entrepreneurs are re-creating food manufacturing in their own image and according to their own ideology -- hip, local, creative, fun, unique, retro, sustainable. Propelled by many diverse forces -- the local food movement, climate change, immigration, the recession, waterfront development -- the products of New York's food revolution are now on display at all sorts of new venues, both profit-making and nonprofit. Breads, biscuits, syrups, beer, noodles, sauces, coffees, chocolates, cookies, ice cream, etc., are sold -- many after having been prepared at one of the two city-financed food incubators.

While food companies have closed or left, enough have opened to keep the numbers fairly steady. Figures from the Bureau of Labor Statistics show that in 1990 the city had 938 food establishments. That decreased to a low of 872 in 2006, before climbing to 1,009 last year.

Small May Be Beautiful, But is it Profitable?

One might argue, however, that the artisanal products are not quite real in the same way that Old London Melba Toast or Stella d’Oro cookies are. Will they evolve into truly profitable businesses?

Seth Pinsky, president of the Economic Development Corp., notes that the city doesn’t need all the new producers to succeed, though it would like as many as possible to make it. He said that many food producers traditionally started small -- thus the incubators, which, says, Pinsky, are meant to nurture, but not provide a permanent home. When the companies reach a certain scale they need professional space and will move on.

This kind of city program directed at tiny (even one-person) firms is a far cry from the economic development strategy of, say, the 1970s, when the city focused on large enterprises, particularly Fortune 500 companies. Even then it was understood that 90 percent of city businesses had fewer than 50 employees -- but dealing with small businesses was deemed just too difficult, and the pay-offs too distant.

Today's zeitgeist is entirely different, with an admiration for the unique, particular and local -- especially in food. But can that zeitgeist be exploited to profitability? Can the many adorable vendors with their adorable products at, for example, the Smorgasburg or Dekalb Market in Brooklyn or the New Amsterdam Market in Manhattan, evolve into stable businesses?

Karen Karp, a prominent food consultant whose company motto is "good food is good business," points out that quite a few niche brands have gone mainstream. Terra Chips, for example, which was founded in a tiny private kitchen in Brooklyn 20 years ago to make delicious but nutritious root vegetable chips, was bought by the Hain Food Group (now the Hain Celestial Group) in 1998. In 2002, Hain moved Terra's production plant and its 90 jobs from Brooklyn to a 75,000-square-foot building in Moonachie, N.J.

Tom Cat Bakery, which opened in Long Island City in 1987 with a $120,000 investment, initially produced 300 loaves of French bread and sourdough and 400 rolls a day. By the time it was acquired by food-oriented venture capitalists in 2008, it had 275 employees, 900 customers, and $32 million in annual revenues.

But will Tom Cat have to follow Terra Chips -- and other successful companies -- across the water to New Jersey, or even out of the region altogether? "They really want to stay in Queens," says Karp, "but they’re bursting at the seams. Real estate is a problem."

To help entrepreneurs cope with New York's high cost of real estate and chronic space shortage, the city has responded with two very different options. The first is the Brooklyn Navy Yard, which has some 3.6 million square feet of space in 40 buildings distributed over 300 acres. The yard charges market rents but its city-owned status exempts tenants from paying property tax, which can be a significant savings.

Second, the Economic Development Corporation set up the entrepreneurial incubators, creating over 135,000 square feet of affordable work room for food. The incubators in turn have generated over $20 million in venture capital investment.

Take the Entrepreneur Space, which is a partnership between the Queens Economic Development Corp., headed by Seth Bornstein, and Mi Kitchen es su Kitchen, headed by Kathrine Gregory. Bornstein’s office had $500,000 in capital resulting from a shopping mall development that had to be reinvested in development projects in Queens. Using part of these funds plus an Economic Development Corp. grant of $175,000, Bornstein upgraded the former union training hall at 37th Street and Northern Boulevard into sleek, efficient kitchens, classrooms, and conference rooms. The 5,500-square-foot, professionally equipped commercial kitchen is open 24/7 and currently incubating over 150 clients, though the number fluctuates. The cheapest shift is early morning -- 1 a.m. to 7 a.m.—for $154; the most expensive is daytime -- 8:00 a.m. to 4:00 p.m. -- at $231.

Danny Lyu, who makes immensely popular Mexican sandwiches called Cemitasthat he sells at the Smorgasburg, says Entrepreneur Space is expensive but worth it. "The space is divided and segregated well," he notes, "but the atmosphere is communal. You help each other, and make sure everything is clean when you leave. If you don’t have your own bricks and mortar, you have to go into shared space, and you have to help each other to make it work."

The incubators provide kitchens that already meet health regulations and negotiates with the Department of Health and Mental Hygiene to encourage a reassessment of regulations that can be destructive for fledgling enterprises. An ongoing problem for start-ups is that the health department requires caterers to have permanent premises.

"We're one of the licensed spaces," says Gregory. "All manufacturers operating here can get the appropriate licensing that allows them to sell food legally.”

The city, said Stringer, needed to analyze and designate its foodshed, the territory between where food is produced and where it’s consumed. Much like a watershed, which outlines the flow of water serving an area, a foodshed outlines the flow of food from land to table. Stringer urged giving growers of healthy food within roughly a 200-mile distance special access to the city's food markets and outlets. He also pushed for City Hall to allocate 20 percent of the $435 million school food budget to local producers and processors.

Joan Dye Gussow, the well-known nutritionist and gardener who is often called the matriarch of the sustainable food movement, recently commented, "If 20 years ago any elected official had talked to me about New York's foodshed I would have thought they were smoking dope. Nobody was discussing it. Nobody, at least in government, understood the implications of the city being hideously dependent on petroleum to get its food."

Part of the problem is that even as the old-style food industry was breaking down and being re-created in a different model, the city's food distribution system -- centered on the Hunts Point Market in the Bronx â€“ also was showing its age. Handling some 70 percent (and $2 billion worth) of the fruits and vegetables eaten by New Yorkers, Hunts Point's physical plant has become dangerously inadequate. Dozens of diesel-run tractor-trailers are used to store produce, which is not only environmentally unsound but in violation of federal cold chain standards, which increasingly require an unbroken cold chain to maintain food within a stipulated temperature range.

Meanwhile, even as the city tries to figure out how to upgrade Hunts Point, the new upscale chains that have moved into New York -- Whole Foods and Trader Joe's, to name two -- have bypassed Hunts Point altogether, shipping in their own superior and often local produce. Only 2 percent of Hunts Point produce is local, according to City Council Speaker Christine Quinn.

Just five years ago, city residents wanting New Jersey peaches or New York apples bought them mainly at the Greenmarkets. Now they're available in good grocery stores -- and from suppliers like Fresh Direct. Even Wal-Mart, the nation's largest food seller that is anathema to some community activists, has a corporate policy of reaching out to small and medium-sized farmers, says Nevin Cohen, assistant professor of environmental studies at the New School. These suppliers have structured a very efficient distribution system that ignores Hunt’s Point, except when they run low on supplies.

Even as many markets offer ever more local produce to New Yorkers, Stringer makes the leap to the next problem: food processing. He urges City Hall to pursue "an industrial retention policy to promote the food processing industry by creating financial incentives for small-scale processing in the foodshed, which may include streamlining fees and permitting processes, incorporating food processing in wholesale market development, and training local workers." 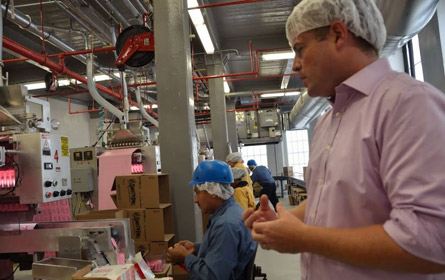 While many food manufacturers have left the city, Cumberland Packing has stayed on, producing Sweet'N Low and other products in old buildings in and around the Brooklyn Navy Yard.

Take fees. Nearly all local produce is shipped in by truck. But every truck coming over Port Authority bridges must pay tolls kept deliberately high both to support the port and to deter traffic. The tolls act as an unyielding, high tax on small business and are also often the first problem cited by established food businesses. When asked what he would most like government to reform to help his business, Steven Eisenstadt, CEO and president of Cumberland Packing Corp. (which makes Sweet’N Low and Sugar in the Raw, among other products) said: bridge tolls. At $80 a crossing, the trucks make hundreds of trips annually to deliver Cumberland’s raw materials, all of which must be imported to Brooklyn.

Cumberland is the kind of stable, profitable food business that once drove New York’s economy. Located both outside and within the gates of the Brooklyn Navy Yard, Cumberland is a family business that is committed to its products, its neighborhood and its 385 employees, about 340 of whom are members of the United Food & Commercial Workers. "We've always made job retention and creation part of our mission," says Eisenstadt, "and have never laid anyone off. We have some antiquated machinery from my grandfather’s day that we keep going for the jobs. We believe in a double bottom line of profit and social responsibility."

Were Cumberland to automate fully, it could slash its workforce to some 80 workers -- which Eisenstadt says it has no intention of doing. Some 200 workers have been with the company for over 20 years.

The 19th century buildings are precisely the kind economists often cite as outdated for today's manufacturing: multi-story with cut-up floor plates and inefficient elevators. But, says Eisenstadt, "We've made it work. We’re profitable and happy here. The navy yard has been very good to us."

The question for the future is: Can the city hold onto its remaining old-time food manufacturers, like Cumberland in Brooklyn or Streit's Matzos on the Lower East Side? At the same time, will it be able to attract and nurture to profitability artisan manufacturers, and use its buying power to support local food?

"Over the last 25 years New York has remade itself into a world-class food city, with a new generation of high-end destination restaurants and markets," says Karen Karp. "Food is why many people come here. Yet our infrastructure, which is from the dark ages, doesn’t match our status as a world-class food city."

Can this be fixed? One thing for sure: The combination of elected officials paying attention to food issues and young voters pouring into the food sector as entrepreneurs and consumers means that food and its many issues will be on the agenda for the next set of elections. That will be a first for city politics and a development that may trigger a new phase in the food revolution.

Julia Vitullo-Martin is a senior fellow at the Regional Plan Association and director of its Center for Urban Innovation.