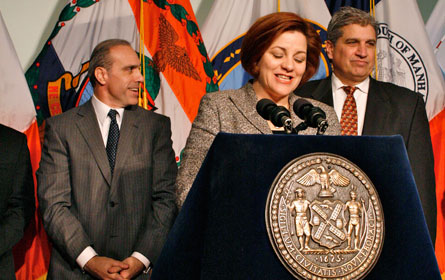 Approximately 20 supporters of the resolution — which OWS asked supporters to attend City Council for via social media the day before — cheered on the bill, while dissenting Councilmen were booed and hissed from the observation balcony during the Council’s debate. Resolution 1172 expresses the Council’s support of the U.S. Congressmen who are seeking to overturn a Supreme Court decision that said that corporations and people share the same free speech rights and with it, the unrestricted ability to lobby politicians. The City of Los Angeles recently passed a similar bill.

Corporations can't "laugh or cry," said the resolution’s sponsor Councilman Brad S. Lander speaking on the Council floor. "It's not an issue of left or right, it's an American issue."

“Corporations are people. All their money goes back to the people,” he said, before being hissed and booed by onlookers so much that Council Speaker Christine Quinn extended his speaking time.

The vote was mostly along party lines with 41 yes-votes from Democrats, five no-votes from all five Council Republicans (Councilmen Dan Halloran, Vincent Ignizio, Peter Koo, James Oddo, and Ulrich), and one abstention from Councilman Peter Vallone, a Democrat.

The Road to Transparency

Following last month’s vote to notify parents and employees about testing for the dangerous chemical PCB in schools, the City Council voted unanimously today to give New Yorkers “TIPS” — Transparency In Paving Streets — which requires the Department of Transportation to disclose information on their rating of city streets, the dates of past repair and pavement, and plans for future repaving.

Speaker Quinn noted that Community Boards rank streets and areas in New York that need to be addressed and report to the DOT. Transparency about how city streets are ranked and when they were last paved is crucial to helping citizens advocate for their own streets Quinn said.

In the first stated meeting of the New Year, the Council also rejected three of the Mayor’s proposed budget cuts for the Fiscal Year 2012 budget.

The first rejected cut was a $730,000 cut to the Office of the Chief Medical Examiner which the Council says would have created delays in processing DNA tests in rape test kits and other forensic evidence in criminal proceedings. The other rejected cuts were a 1.5 million cut to the New York City Health and Hospitals Corporation’s operating subsidy, and cuts to two after-school programs.

These cuts would have had a “very negative impact on New Yorkers,” Quinn said.

The sole dissenting vote against the passage of the Mayor’s budget cuts was Councilman Charles Barron who criticized the Council for approving layoffs and attrition job cuts and criticized his colleagues for supporting the “99 percent” on the street but voting against them “inside [the Council Chambers].”

The approved budget includes hundreds of job cuts to the Departments of Sanitation, Cultural Affairs, and Health and Mental Hygiene.

Also On the Agenda

The Council also passed a bill that will regulate the sale of carpets, ensuring that there are no harmful chemicals in carpets sold or installed in New York City. These chemicals, which contribute to “sick building syndrome” are said to affect 30-70 million Americans.

The Council also voted on three resolutions that call on the Congress to further regulate gun control in the United States.