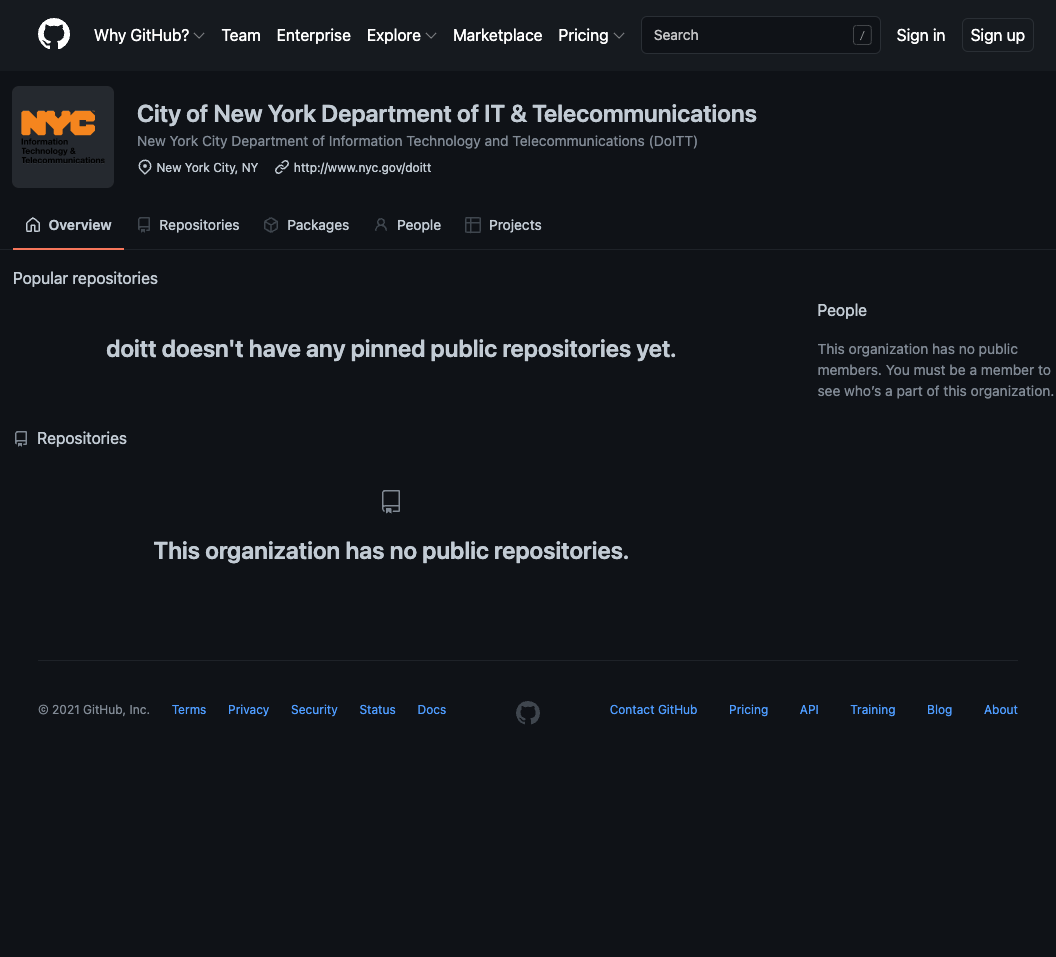 New York City’s civic technology community has for many years been calling on city government to establish a Digital Service Organization (DSO). DSOs are technology groups organized within government agenies that use open source software to create their own technology solutions instead of buying proprietary services from vendors like IBM, ESRI, and Microsoft. The DSO organizational model is about 10 years old and has been adopted by cities (eg Boston), regions (eg Ontario) and national governments (eg 18F) all over the world with great success.

Inexplicably, New York City has failed to organize a DSO of its own. So while governments all over the world have operational DSOs with dozens, even hundreds, of staff effectively building and deploying modern websites and apps, and rebuilding critical technical infrastructure to modernize service delivery, New York City’s Chief Technology Officer, with less than a month left in the de Blasio administration, just put up its first job postings seeking “founding member[s] of the NYC Digital Service!” 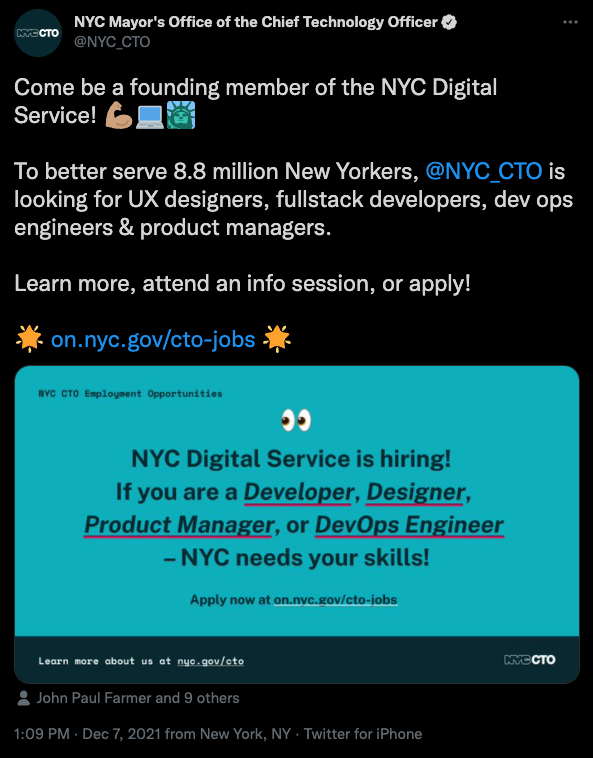 From the outside, it certainly looks like the administration and its CTO want to have their cake and eat it too. They want to claim they “founded” New York City’s DSO without having to ruffle any feathers by operationalizing it. And DSOs ruffle a lot of feathers. This is something the administration and CTO know well because when diligent civil servants within city agencies organized DSO-style units on their own, these units were mostly ignored by the city’s technology leadership and left to fend for themselves against legions of bureaucrats uninterested in implementing DSO-style reforms. Here are a few examples:

The Mayor’s Office of Economic Oppportunity’s Benefits and Screening API team have done a tremendous job putting together a solution for automating the screening of people for city benefits. Their pioneering work delivered a functional technical solution, but a system without users isn’t very useful. They need city agencies to work with them to both document screening criteria and to use their screening tools.

Without support from top leadership pressuring agencies to work with them to implement their system, what could’ve been a massively successful program to modernize how the city delivers benefits has turned into an incremental step in the right direction. And that direction leads right to Eric Adam’s “MyCity” app concept, which he mentioned frequently during his successful campaign for mayor.

The story of Planning Labs at the New York City Department of City Planning is another good example of this administration’s failed technology leadership. Planning Labs was created within City Planning explicitly as a DSO. In its two years of operation, its members built about a dozen innovative and popular apps such as the ZoLa land use map system and Population Fact Finder statistical research tool.

But its success and aggressive DSO-style approach to IT reform drew the ire of the NYC technology bureaucracy, who’d prefer to sign multimillion dollar contracts with Microsoft than spend hundreds of thousands of dollars organizing their own software teams. And so…NYC Planning Labs still exists but hasn’t released a new open source product in nearly two years and none of the original team members work for the city anymore.

To understand why the city technology bureaucracy fears DSOs so much you have to understand that the current crop of technology leadership, not just in New York City but in governments all over the world, are, generally speaking, not engineers and product managers but business people and public administrators. The way they’re trained to produce technology is through procurement processes, not by building it. This approach used to make sense.

Twenty years ago software was a lot harder to make than it is today so governments needed to hire specialized software development firms to make it. But not any more. Now there are open source components for virtually everything. DSOs knit them together to create solutions. Often they do this with flexible teams of five or six people: two software developers, two graphic/content/experience designers, and two project/product managers.

The fact that it’s never been easier to create complex information management systems to make government services delivery faster, better, and cheaper is great news. But it's also scary for the old guard technology establishment and their young acolytes. They don't know how to organize productive software development teams and would much prefer to outsource this work to the giant corporations that, very likely, they used to work for and/or, very likely, they plan to work for again after their government service is over. Why would they, as a city employee, want to spend their time organizing software teams for the government when they could spend it organizing lucrative contracts for potential future employers?

Plus, building software within the city government is hard! The city’s arcane civil service designations make it difficult to hire competent software developers and pay them competitive rates. The city’s archaic IT infrastructure, from its slow internet, to its firewalls, to its government-issued computers, makes it hard for development teams to use the best tools for their work. That’s why leadership is essential for pushing through the type of coordinated reform New York City needs to modernize its technology infrastructure and service delivery. We need the Department of Citywide Administrative Services (DCAS) to update civil service roles, the Department of Information Technology and Telecommunications (DoITT) to update network configurations and hardware, the Office of Management and Budget (OMB) and other agencies to update their contracting practices, and so much more.

Without leadership driving reform, most people follow the path of least resistance and business as usual continues. During good times that simply means more of the same waste, inefficiency, and poor service quality that so many New Yorkers now expect from their municipal government. But during bad times, it means wholesale embarassment.

Most of us remember TurboVax, a website made by an unaffiliated volunteer software developer working in the spirit of mutual aid. That site did what the city’s CTO, DoITT, DOHMH, Health + Hospitals, Emergency Management, and others, with a combined budget of tens of billions of dollars, couldn’t: create an online map showing people where they could get vaccinated. The New York Times headline: “N.Y.’s Vaccine Websites Weren’t Working. He Built a New One for $50”. If that story couldn’t wake up the administration’s technology leadership to the reality of their failure, nothing could.

Had the city had a DSO, I have no doubt they’d have had a website up before the vaccine was out, and they’d probably have solved a hundred other problems as well: from rebuilding the famously terrible DOBNow system, to improving the usability of the city’s decade old central website (nyc.gov), to unifying user logins among city websites, giving New Yorkers the upgraded civic engagement experience that we, in a sense, voted for during the last referendum cycle, making benefits easier to access and so much more.

The good thing about being behind is that you can catch up by utilizing the best practices established by others instead of having to invent those best practices yourself. As such, the incoming Adams administration is in a perfect position to upgrade the city. There are tons of DSO alumni they can hire, Playbooks they can follow, and even established federal partnership pathways designed explicitly to support DSO-powered reform.

And the de Blasio administration gets to say they started it all!

I guess everyone wins.

***
Devin Balkind is a civic technologist. On Twitter @DevinBalkind.