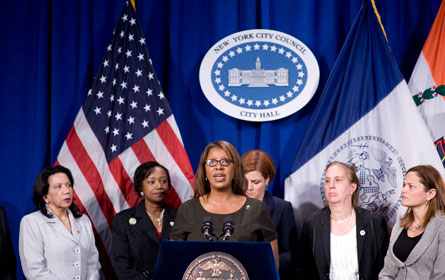 On the heels of the announcement that the CityTime scandal would be laid to rest by a $500 million settlement, the City Council passed a bill yesterday to monitor significant changes in capital spending contracts.

“This legislation will prevent the next CityTime,” Council Speaker Christine Quinn said, before the costs skyrocket like they did with CityTime, an automated payroll system. That contract was supposed to cost the city around $68 million, but the bill surged to more than $700 million before the rampant fraud was exposed.

The Contract Overrun Bill is the latest legislation in the Council’s continued battle with the Mayor over the contract budget, which has grown by more than 70 percent during the Bloomberg administration. Last Fall, the Council passed a bill that mandated the city to use city employees for contract work if it were cheaper than to hire contractors. Mayor Bloomberg vetoed the bill and the Council overrode his veto in December.

CityTime was a major blemish to Mayor Michael Bloomberg’s administration — particularly as he styled himself as a business-savvy, cost-cutting manager — and yesterday’s bill is yet another way Speaker Quinn may be angling to distance herself from the Mayor as she prepares for her mayoral run.

The bill, which is sponsored by the Chair of the Contracts Committee Councilman Letitia James, mandates that the city notify the Council of contract revisions or cost overruns that represent 20 percent of contract valued at $10 million or more. Once contracts have been flagged, future revisions of 10 percent or more of the revised budget must also be reported to the Council. Ninety percent of city contracts cost more than $10 million dollars, Quinn said, and implementing a threshold means that the bill will be effective, without “over micro-managing” some of the smaller contracts.

Crucially, the bill mandates the city notify the Council on contract overruns as they occur — “and the 'as they' is very important,” she said, adding that it allowed the Council to weigh in on whether the City needs to walk away from a project or revise the contracts before the costs spiral out of control.

The Council will make the contract information public on their website as well.

Getting detained by cops at the West Indian Parade last year did not sit well with Councilman Jumaane D. Williams. The Councilman, who represents parts of Brooklyn including Flatbush, has released six bills on police reform this year.

The most recent was introduced at yesterday’s meeting and went straight to the top cop: Res.1248 calls on the state to change the police commissioner from an appointed to an elected position.

Williams has released two other resolutions this year — one on prosecuting police misconduct and another on the state’s involvement in crimes committed by police officers Williams has also released three bills — on stop and frisk, police identifying themselves to the public, and racial profiling.

“I’m trying to figure out ways to make the police more accountable to the people who live in New York City,” Williams told Gotham Gazette. “If the Commissioner had to go before the people and explain, we might be able to get more responses.” Williams said; that police accountability has long been an issue for him, but his experiences at the parade — which many said was a product of racial profiling —have definitely aided his platform as an advocate. As to whether the resolution has a shot at being acted upon or is simply a political statement, Williams said.

“Nothing is impossible. It’s definitely about pushing the conversation,” he said. “Let’s explore it and if it’s something that needs to be done, let’s do it.”

Quinn even fielded a few questions on her upcoming wedding to longtime partner Kim Catullo. The pair recently announced a May 19th date for their wedding.

Quinn, who opted not to discuss the details of the ceremony, said she was having “a lot of fun” planning her nuptials.

“You think you’re going to be too cool to care about the vegetarian entrees — but I care! I care a lot,” she said. “You hear people talking about their weddings all the time, but for LGBT people in this state and most of the LGBT people in the country, that’s never been an option.”

Quinn and partner Catullo, a corporate lawyer, will wed in Manhattan in a private ceremony.

“It’s a huge thing. Marriage is one of those few words in the world you don’t have to explain. Everyone knows what that means,” she said. “It does make you feel like a part of society in a more whole and real way.”