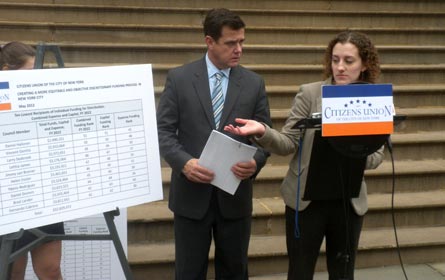 Back in 2008 a federal investigation revealed that the City Council had been giving money from the Council’s budgeted discretionary funds to fictitious organizations going back to 2001. The revelation was particularly embarrassing for Council Speaker Christine Quinn, who had been an advocate for increased transparency in the city budget process.

The Council subsequently enacted a series of reforms to make the process for distributing the Council’s discretionary funds more transparent.

Although these reforms have helped increase accountability in the budget process, a new report indicates that further improvements are still needed in the Council’s budget process. More transparency is still needed because Council politics still play a large role in the discretionary funds distribution process, according to the report released this week by Citizens Union, a government watchdog group that also publishes Gotham Gazette.

“We just want to build upon the reforms that have been made, and make the process even better,” said Dick Dadey, Citizen Union’s executive director.

The report analyzed budget data from fiscal years 2009-2012 and found a wide disparity in how much discretionary funding different Councilmembers receive, with committee chairs and more powerful Councilmembers receiving a significantly larger share of funds than newly elected members.

There is also no correlation between the level of need in a given district and the amount of funding it receives, the report found. This means that some low-income Council districts have received a large share of funding while other low-income districts have been left out.

The report said that these funding discrepancies exist because the Council Speaker has too much power in the distribution of the Council’s discretionary funds, which totaled more than $578 million in last year’s budget.

“The City Council Speaker and other leaders have too much say in what gets distributed. One can argue that that’s a way to keep the Council in line,” Dadey said. “But we don’t think that city taxpayer money should be used for such political purposes.”

In the report Citizen’s Union makes a number of recommendations to make the budget process more transparent and to distribute funds on a basis that takes a district’s socioeconomic conditions into account.

Speaker Quinn agreed with a number of the report’s recommendations. But she added that distributing funds based solely on economic need would take away the flexibility that the Council needs to make year-to-year budget adjustments.

The Council uses discretionary funds to pay for local projects and citywide initiatives not included in the Mayor’s budget.

Councilmembers receive capital and expense funds to pay for projects â€“ usually within their district â€“ based largely on the Council Speaker’s discretion, the report found. The Council Speaker distributes all capital funds and a portion of the expense funds to the individual Councilmembers at her discretion. Last fiscal year the Speaker disbursed $459 million out of the $578 million in discretionary funds.

Although each Councilmember gets an equal base amount of expense funds, the report found a wide gap in the amount of total funding each member receives.

In last year’s budget Domenic Recchia (D-47) received more than $12.1 million in combined capital and expense funds, more than any other member. That was $9.6 million more than Daniel Halloran (R-17), who received the least amount of funds. Recchia is the highly influential chairman of the Council’s Finance Committee, while Halloran is a newly elected Councilmember.

The difference between how much money members receive can be significant over several years. From fiscal years 2009-2012 Recchia received $57 million than Halloran.

“Most districts do not receive the amount they would under an equal system,” said Rachael Fauss, the director of research and advocacy for Citizens Union, and lead author of the report.

Fauss compared the amount of discretionary funding received by the Councilmembers with socioeconomic indicators in their districts like median household income and unemployment rate. There was no correlation between the funds allotted and the level of poverty in a given district, she found.

“While some members ranked high in the socioeconomic indicators received money, many did not,” she said.

Fauss included a number of recommendations in the report to address the disparities in discretionary funding. The report recommended a more equal distribution of the $50 million in expense funds given to individual Councilmembers. One third of that money is distributed equally to all members, the other two thirds being granted to members by the Speaker.

The report said that this money should instead be divided into two pots. The first pot should be divided equally among the Councilmembers, the report said, while the other is distributed according to a formula created by the Council that favors low-income districts.

Council Speaker Quinn said that she doubted the effectiveness of such a formula in distributing capital funds for parks, libraries and schools.

“The one-time nature of most capital projects also means that funding will vary from year-to-year in a way that is not amenable to fixed formulaic distribution,” Speaker Quinn said in a statement responding to the report.

Fauss suggested that the formula could be adjusted every four years to give the Council more flexibility in determining the allocation of funds.

But Quinn agreed with many of the report’s other recommendations such as formalizing the budget reforms made since the 2008 scandal in the Council rules, the report said. The reforms otherwise will not apply to the next Council elected in 2014.

Fauss said that Manhattan Borough President Scott Stringer makes information concerning his discretionary funds from the city available in an online database. The Council â€“ and other borough presidents â€“ should do the same, she recommended in the report.