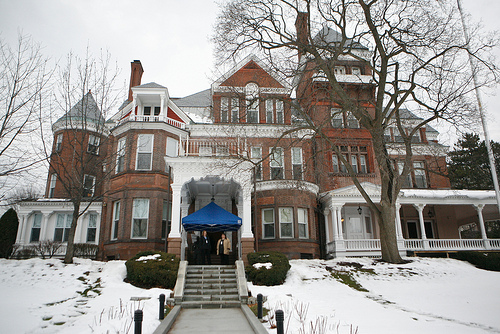 ALBANY, N.Y. â€“ Most legislators know where they want to be tomorrow at 5:30 p.m., and surprisingly it isn’t back in their districts preparing for what might be a white-knuckle election in November.

There will be a legislative stampede to the generally gritty and worn part of Albany where broken sidewalks jut up out of the earth, rusted metal fences line the neighborhood and the roofs of houses look as if they might never have seen an update in their 100 years of existence. It's not the view they will be racing to see, but one of the stately old homes of Albany’s Mansion Hill neighborhood: Gov. Andrew Cuomo’s ceremonial residence.

Last year, legislators made the same trip. They had the triumphs of same sex marriage and the glow of a new relationship with a popular governor. But this year, things have changed. Cuomo didn’t get everything he wanted this year from the Legislature and, while lawmakers are working longer hours in a mad dash to pass hundreds of pieces of legislation, they aren’t working last minute on a grand deal. This session is more likely to fade away. There won’t be any fireworks this time. And Cuomo’s relationship with his here-to-fore close allies in the Senate majority is showing some signs of wear.

So what will the photo op with Cuomo mean this year? What kind of tone will the end of this legislative session set heading into election season?

The governor has deployed the mansion as a backdrop for political theater a number of times since he took office. A visit to the mansion and a photograph with the governor with an approval rating in the high seventies at the end of a session that has been labeled “successful” by Albany standards could be a big boost to lawmakers on both sides of the aisle â€“ especially with the Senate majority up for grabs during a presidential election year.

Cuomo has played well with the dominant Senate Republicans. Last year, Republicans were credited for passing the same-sex marriage act â€“ a bill their votes and leadership had previously blocked. But thanks to pressure from Cuomo and donors, they relented and Cuomo got what he wanted and Republicans got their pictures taken next to a grateful Democratic governor.

This year, Republicans helped Cuomo pass his budget, supported Tier 6 pension reform and moved immediately on his proposal for a "justice center" that would investigate abuse of the disabled.

Cuomo also cut a deal with Republicans that preserved district lines that a number of good government observers have called extremely “gerrymandered.” Gleeful Republicans rushed to the governor's mansion to have their pictures taken with Cuomo after the district lines were certified.

Senate Democrats did not attend, despite getting an invite.

But as the session comes to an end and legislative races heat up, two of Cuomo’s priorities remain unfinished: his plan to reduce charges for carry small amounts of marijuana that some experts say could lessen the impact of the city's stop-and-frisk policy on black and Latino youth; and campaign finance reform. Both were strenuously opposed by Republicans.

Cuomo took to the airwaves yesterday to attack Republicans for blocking the marijuana bill, accusing them of bowing to pressure from conservatives. "I think there’s no doubt that the state Senate heard the conservative wing of the party and they’re reacting to it," Cuomo told Fred Dicker on his Talk 1300 radio show. The governor also went further, saying that Conservative values don’t appeal to most New Yorkers. “To the extent the Republican Party is successful, it’s because they are moderateâ€¦ There is just no place in this state for extreme conservative theory.”

Senate Majority Leader Dean Skelos explained his position on the bill to reporters: “I’m not looking for the amount. The issue was in the city in particular if you’re stopped by a policeman, asked to empty your pockets, if you had a joint in your pocket, that would be a violation. But bringing out on the desk at his instruction that would make it a misdemeanor. That is wrong. It should be a violation. Your following the policeman’s order â€¦ But being able to walk around with 10 joints in each ear and it only being a violation, that is wrong.”

Passage of the bill would have been a major victory for Cuomo among liberals and minorities who have at times felt abandoned by the governor.

Passage of some sort of campaign reform would have been a gigantic feather in the cap of the governor’s good government credentials â€“ credentials that took a massive hit not only in the state but nationwide when he avoided vetoing the Legislature’s gerrymandered district lines.

Some observers have said that they expect campaign finance to return as an issue next year when elections aren’t looming, but Republicans have turned their opposition to the issue into a campaign platform.

The Senate Republican Campaign Committee sent out a letter to supporters in May blasting Democratic support of public financing of campaigns.

“They’ve even hatched a new plan to use tax dollars to pay for their political campaigns. Why now? Because just as they couldn’t control spending when it involved the public’s dollars, they also overspent their own campaign budgets. They’re broke â€“ mired in $1.5 million debt, with dim prospects for raising more money from private donors,” read the letter.

But these two issues aren’t likely to spur Cuomo to heap his support on Senate Democrats. They are still scandal-scarred and their relationship with the governor hit an all-time low after he cut the redistricting deal. Senate Democrats continue to push with Assembly Speaker Sheldon Silver to increase the minimum wage â€“something that Cuomo has waffled on and firmly said would not happen this session.

In the end, Republicans are more likely to benefit from Cuomo’s support this coming election year. Even if the governor only gets involved in a few races, politically he owes more to individual Republican members than Democrats. But Cuomo has said he will sidestep politics.

“I want to do as little politics as possible because I don’t find injecting politics particularly helpful to the process of getting legislation passed,” Gov. Andrew Cuomo said in May.

Cuomo may not be planning to dive head-long into the battle for the Senate, but even his smallest moves could mean big things in the balance of the Senate â€“ even a simple photograph at the governor's mansion.