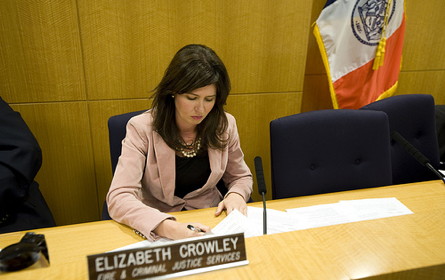 NEW YORK â€“ City Councilwoman Elizabeth Crowley ran for Congress -- and some say it just might have cost her district hundreds of thousands of dollars.

A review of data on discretionary funding for the 2013 fiscal year released last week shows that, out of 51 council members due to get a serving of what is commonly referred to as pork, Crowley fell 33 spots to the second-lowest position -- right above Councilman Larry Seabrook, who is currently on trial accused of embezzling discretionary funds.

Crowley’s share was cut by $286,394, leaving her with only $378,000 to dole out to community organizations in her Queens district. Two years ago, Crowley’s district was in a similarly low place, but last year she bounced back up to the 17th spot.

A spokesman for Crowley said he didn’t know how to explain the drop, but he had an idea.

Quinn, who helps determine the distribution of funds in consultation with her council peers, endorsed Crowley’s rival for the 6th Congressional District, Assemblywoman Grace Meng -- who ultimately won. Crowley’s own cousin, the leader of the Queens Democratic Party, also threw his support behind Meng.

Do you want to take a closer look at how much your council member received in discretionary funding?

We've put together two handy spreadsheets and made them available through Google Drive that summarize both expanse and capital funding for years 2009 to 2013.

Looking for the original budget documents? Find the expense budget here. The capital budget is here.

A spokeswoman for the City Council, Maria Alvarado, said that allocation of discretionary funds is based on a number of factors, “which results in a broad-based citywide distribution of funds.”

But council members and political observers have long raised questions of whether politics and the speaker play too large a role in how discretionary funds are allocated -- a process that is murky at best.

“The speaker's power in allocating discretionary funding has often been based on political loyalties as well as on the makeup of the population in each member's district,” said Flora Davidson, a professor of political science and urban studies at Barnard College.

Councilman Charles Barron, whose district has been consistently at the bottom of the rankings in discretionary funding, said the money is allocated “based upon being in good favor with the speaker.”

"I think we are suffering from a dictatorship of the speaker," said the councilman, who represents parts of East New York, Brownsville, East Flatbush and Canarsie. Barron said he feels districts in what he calls "the gravest need," like his, deserve a bigger share of the budget.

He said he plans to present a resolution at the next Council meeting to revamp the discretionary funds allocation process, basing it solely on factors such as poverty and unemployment rates.

Councilman Peter Vallone, Jr., is similarly frustrated -- his District 22 received the fourth-most discretionary funds in 2009, but now sits in 22nd place after $350,000 in cuts over the past two years. Vallone said he sees this as a punishment from Quinn for not supporting renaming the Queensboro Bridge after former Mayor Ed Koch two years ago.

"I think it's clearly retribution for my opposition to taking the Queensboro Bridge away from the people of Queens," Vallone said. "It clearly has nothing to do with the way that I allocate funds."

Quinn has said she disagrees with the view that she has an inordinate influence over how discretionary funds are distributed. “If you look at the system that we have in place, the system that we have greatly reformed â€¦. We basically went from a system we inherited here that was kind of an honor system to a verification system," Quinn said at a news conference.

Elizabeth Crowley’s spokesman said that the councilwoman and her staff will “keep working for our constituents,” with the hope that next year they see another bounce-back.

In stark contrast to Crowley’s fortunes, Councilwoman Helen Diane Foster moved up 20 spots in the ranking of discretionary funding. Her district will receive close to $600,000 in the 2013 fiscal year. That’s a gain of $220,000 more in discretionary funds this budgeting cycle.

In previous years, Foster’s relatively small serving of pork demonstrated discretionary funds not correlating with a district’s poverty level. Her district includes some of the poorest communities in the South Bronx, West Bronx, Morrisania, Highbridge and Melrose, and received the second-to-least amount of funding last year.

“The district is pretty underserved by the government,” said spokesman Steven Stites. “In the 2008 and 2009 fiscal year we got the least ... almost nothing, but in the past two years there has been a considerable increase, almost twice, combined of what the district got in previous years.”

Stites said there is a misconception that people in the upper middle class do not need assistance. But he said that Halloran had done much for his community, including saving a public pool and the Engine 306 fire station. Stites said that the amount of discretionary funding the district receives does not reflect the amount its residents dole out in taxpayer dollars.

“People pay a lot in taxes, but they are forgotten about,” he said.

Although the decision process behind distributing discretionary funds remains unclear, Councilman Dan Garodnick is working to make at least part of the system easier to understand. He now posts meeting schedules and letters from those requesting funds on his website.

“My office took steps to shine more daylight on the budget process this year," Garodnick said in a statement. "We felt that posting our meetings and budget request letters online is a natural next step for budget transparency, and can be a useful precedent going forward."