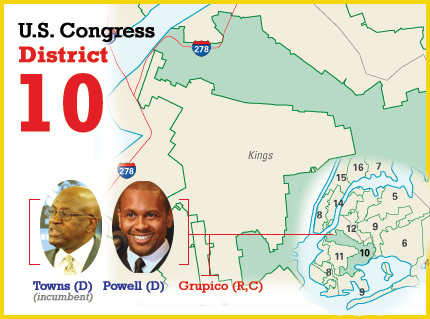 We all know the conventional wisdom about congressional races in New York City: Incumbents don't lose. That has not stopped a number of people over the years from taking on Brooklyn's Edolphus Towns, but Towns has always prevailed.

This year, Kevin Powell, a former cast member of the Real World turned author and speaker, wants to change that and defeat the 26-year congressional veteran.

The two faced off briefly in the 2006 to represent this district, which encompasses East New York, Canarsie, Brownsville, Bedford-Stuyvesant, Cypress Hills, Clinton Hill, Mill Basin, Midwood, downtown Brooklyn, Boreum Hill, Fort Greene and Williamsburg. That year, Powell campaigned initially but did not stay on the ballot for the primary -- reportedly getting sidetracked by the Hurricane Katrina recovery effort. Two other candidates -- City Councilmember Charles Barron and then Assemblymember Roger Green remained in the race. Towns eventually won but with less than 50 percent of the vote.

Because Towns saw a difficult primary two years ago, some say Powell may present a significant challenge this September despite the incumbent's long tenure in the capital and support from many key Democrats.

So far, the race has featured little debate on issues. Observers say Towns has highlighted Powell's previous violence against women -- something Powell admits to in his book, "Who's Gonna Take the Weight: Manhood, Race and Power in America." Powell says that that violence is far behind him. Towns refused to participate in a debate with Powell hosted by the Brooklyn Paper, which some said was an attempt to belittle the threat his challenger posed.

On the other hand, Powell has accused Towns of being invisible in the district, arguing he has done little to address the area's problems. He has also noted that Towns backed Hillary Clinton in the Democratic presidential primary while most voters in the district, which has the largest number of blacks of any district in the state, supported Barack Obama.

According to the Federal Election Commission, Towns has garnered $975,792 in campaign contributions, while Powell has $46,607 through June 30.

Whoever is the victor next week, will face Republican Salvatore Grupico this November.