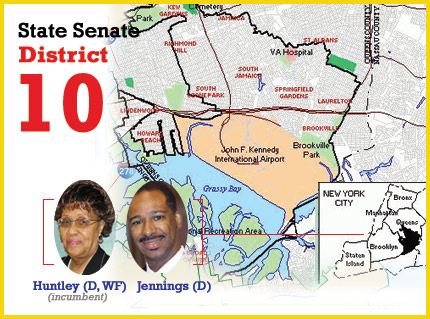 Huntley defeated Jennings and will be unopposed in the general electin.

Shirley Huntley has a rare distinction in New York politics: In 2006, she unseated an incumbent state senator. This came after that senator -- Ada Smith -- was convicted of assault for throwing hot coffee in an aide's face and pulling her hair (the aide allegedly commented on Smith's weight). The party organization stood by Smith who had gained a reputation for bizarre behavior -- but voters apparently had had enough.

Two years later, Huntley faces a challenge from another Queens politician involved in strange incidents: former City Councilmember Allan Jennings. A surprise winner in the Jamaica district in 2001, Jennings quickly gained some citywide notoriety when he took out a series of newspaper advertisements declaring his love for a Chinese folk dancer, compared himself to Jesus and was filmed throwing an object at a news reporter (an incident that made it on to "The Daily Show"). In 2005 his fellow City Council members fined and censured him for improperly firing one employee on his staff and creating a hostile work environment. During the proceedings, five women charged Jennings touched them inappropriately, subjected them to racist remarks and intimidated them. Jennings maintained his innocence but voters threw him out the following fall.

Now Jennings is making a bid for the State Senate because, an aide told the New York Times, "Public service is the only thing that makes Allan Jennings happy." And, the aide continued, "There are a number of people in the community who asked him to run because they felt they were not getting the kind of responses that they thought they should." During his four years in council, Jennings focused on constituent services.

Huntley said she was not concerned about Jennings' opposition. " "After all, he has nothing else to do," she has said. In the Assembly, her Web site says, she focuses on "health care, education, and youth services."

For her part, Huntley made newspapers earlier this year when she announced that she had not paid her mortgage in an effort to find out what her constituents go through with banks when they face foreclosure. The idea backfired, though, when it became known that Huntley had twice narrowly avoided genuine foreclosure, had refinanced her home 10 times in 30 years and, according to the Daily News, " had previously taken several risky loans from sub-prime lenders blamed for defaults in her Jamaica district."