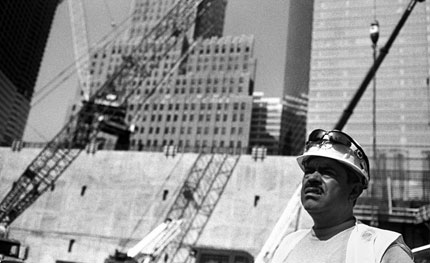 On June 30, the Port Authority told Gov David Paterson what many New Yorkers suspected: Almost seven years after the 9/11 attacks killed thousands and devastated a swath of Lower Manhattan, every public project planned for the World Trade Center site was behind schedule and over budget. In particular, the authority said, the memorial would probably not open on the 10th anniversary of 9/11, the two transportation centers do not have final designs, and demolition of the Deutsche Bank Building, which has to take place before some other parts of the plan can move forward, had fallen woefully behind schedule. And so on.

Rebuilding Timeline: Charting the progress -- and lack of progress -- on key parts of the plan for ground zero.

The Rush to Rebuild: The haste to develop Ground Zero after 9/11 has led to delays, mistakes and missed opportunities.

Health Effects: As a report released last week makes clear, the city government now believes that being near Ground Zero during or after the attacks created lasting medical problems that will cost millions to monitor and treat. Now it worries about the federal government's commitment to cover some of the cost.

Vanishing Culture: Original plans called for four arts institutions to occupy the World Trade Center site. Now only one remains -- and it faces an uncertain future.

The Uncertainty at Fiterman Hall:The building has sat vacant since 9/11. Now workers have finally started to decontaminate the structure, but disputes make it uncertain what will happen next.

The area around ground zero presents better news than the site itself, officials say. “Lower Manhattan has been rebuilt, reinvented and renewed into one of the most exciting neighborhoods we have in the five boroughs of New York City,” Deputy Mayor Robert Lieber said at a press briefing on Tuesday, boasting of business, homes, shops and culture. At the site, though, he conceded, there have been “unmeetable deadlines and unrealistic timetables.”

Similarly Avi Schick, chair of the Lower Manhattan Development Corp., admitted problems at what he repeatedly called “the 16-acre site,” but went on to say, “What’s truly amazing is the transformation Lower Manhattan has undergone since 9/11."

The site's redevelopment, though, remains crucial to the city -- as a symbol and because no neighborhood or city is likely to thrive with a gaping hole at its very heart. To address the problems, Paterson has asked for a new, realistic budget and deadlines on Sept. 30. "We’re not going to give any phony dates or timetables and follow it up with phony ribbon-cuttings and encouraging words,” he has said. But that does not mean the plans may not be scaled back, delayed or even scrapped.

We look at four facets of the aftermath of 9/11 -- seven years after the attacks and three weeks before a possible new stage in our effort to remember, recover and rebuild.