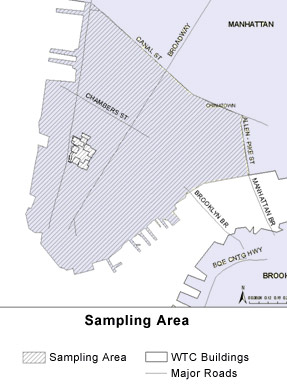 Graphic from the EPA

As the world waits -- and waits -- for the World Trade Center's redevelopment project to rise from the gaping hole along Church Street, downtown residents and recovery workers continue to suffer from the illnesses related to the September 11th attacks. Sinus pressure, coughing, wheezing and difficulty breathing are just a handful of symptoms afflicting thousands of those who lived and worked in lower Manhattan during and immediately after the tragedy -- all are effects of the air's contamination.

Years after the attacks, New Yorkers and out-of-state volunteers continue to emerge saying they suffer from a World Trade Center related illness. Last week, Mayor Michael Bloomberg launched a campaign to seek out such victims -- with advertisements soon to appear on subways and television screens across the city. The mayor and medical experts predicted thousands -- maybe hundreds of thousands -- of untreated responders, volunteers and residents could be eligible for medical care.

At least for now.

Though advocates say the city has adequately responded in the last year to the health effects of the World Trade Center attacks, its ability to treat victims is threatened. Calling federal support "inconsistent and episodic," Bloomberg said the city needs to have a stable funding source from Washington if it is to continue providing medical care to 9-11 workers and residents.

As of now, the funding the city receives could be cut off in 2009 -- eight years after the attacks. With little known of the long-term effects of air contamination downtown, a lack of funding, advocates and city officials say, can cripple the city's ability to adequately address the health needs of victims in the future.

The Response and Results

A report released last week from the World Trade Center Working Group -- an expert panel appointed by Bloomberg to monitor Sept. 11th health-related studies and issues -- showed studies were consistent in finding the prevalence of elevated rates of asthma and other respiratory diseases among recovery workers and those who lived or worked downtown. It also found the prevalence of mental health issues, such as post traumatic stress disorder.

That report, advocates and community representatives say, further solidifies the city's acceptance of scientific evidence that the attacks on the World Trade Center has led to -- and could still be causing -- serious health issues for residents and recovery workers.

This represents a change from years ago.

"As an employer (the city) didn’t provide adequate protection to the thousands of workers around ground zero," said David Newman, the industrial hygienist for the New York Committee for Occupational Safety and Health, an advocacy group. "However, recent developments are quite welcome. The city has acknowledged that people's health has been impacted across a wide variety of populations."

In the immediate aftermath of the attacks, said advocates, the city mismanaged its own workers in the recovery effort -- who, in an attempt to find human remains, picked through a massive, smoldering pile rife with dangerous materials. Those workers suffer from respiratory illnesses caused by inhaling contaminants that tore through their lungs.

Rates of asthma, for example, are two to three times higher for Lower Manhattan residents and recovery workers. Children caught in the attack's dust cloud were twice as likely to be diagnosed with asthma two to three years after Sept. 11, according to the working group's report.

About 25 percent of firefighters experienced symptoms two to four years after the attacks, according to the report. Before the attacks, 5 percent had respiratory illnesses.

The city has allocated $100 million to health care for those affected by the attacks over five years. Some of that funding will go toward the city's World Trade Center Environmental Health Center at Bellevue Hospital Center, Gouverneur Health Care Services and Elmhurst Hospital Center as well as programs at Mount Sinai and at the Fire Department. At Bellevue alone, said city officials, 2,800 people are being treated. A total of about 10,000 are within the Health and Hospitals Corporation system for World Trade Center treatment.

That number, though, is expected to grow with the city's new advertising campaign slated to launch this week. Dr. Joan Reibman of the World Trade Center Environmental Health Center said the centers' total capacity would be about 20,000. Thousands more, she added, could need treatment.

While many advocates now appear satisfied with the city's actions, they are far less so with the federal response.

Having an air purifier in a residence in Lower Manhattan has become commonplace. With the constant construction (or in some cases lack thereof -- see related story) and catastrophe, especially at 130 Liberty Street, residents have taken air quality in their own homes into their own hands.

They have had to, they say, since the U.S. Environmental Protection Agency's response was wholly inadequate.

Twice the agency sent its inspectors around to check out residences and commercial establishments in the lower Manhattan area for contaminants. As part of this program, known as "Test and Clean," the agency committed to ridding the area of the toxic material. Its initial inspection in 2002 -- a program the tested nearly 3,500 residences for contaminants -- was fiercely criticized by city, state and federal officials, because it only included areas below Canal Street and it failed to test workplaces.

After a lengthy review process, the agency tried again. But residents and advocates say the program tested only four materials, including asbestos and lead, and did not expand the area within the program.

The agency began testing again in 2007 -- six years after contaminants and dangerous dust would have landed in workplaces and apartments downtown.

"We're seeing the physical impacts from the World Trade Center exposure and (last week's) report makes you wonder whether there could have been less of a physical impact on building occupants if there had been a proper test and clean program in place earlier," said Community Board 1's Vice Chair Catherine McVay Hughes. "It highlights the importance for it to be done properly if, unfortunately, if there is another incident like this."

According to the latest data from the Environmental Protection Agency, 2 out of 1,092 samples exceeded asbestos regulations. For lead, 77 samples out of 841 exceeded regulatory levels. A spokeswoman attributed a majority of the high lead levels to lead paint, not necessarily toxins from the September 11th attacks.

In response to the community's disapproval of the program, which should be completed within weeks, Agency Spokeswoman Bonnie Bellow said, "We believe we've addressed the concerns of lower Manhattan residents. Our findings were consistent with what we expected."

As for the outdoors, the city, under the purview of its Lower Manhattan Construction Command Center, has several monitoring devices throughout downtown that continue to test air quality on a daily basis.

Recent reports show average and normal levels of particulate matter, from dust to chemical components, at all of the center's mentoring stations, including Greenwich Street, Catherine Street, the World Financial Center and Nassau Street.

Much of the continuous air monitoring was a result of lobbying from Community Board 1.

"The Community Board has been extremely proactive and vocal," said Julie Menin, the board's chair. "We insisted there are these air monitors downtown so it does give us some assurance."

While levels appear to be normal, some still fear what the ongoing construction could do to air quality downtown. Given many of the structures that are currently being taken down -- like the Deutsche Bank building -- are highly contaminated, residents are promoting constant, daily monitoring to ensure nothing is leaked into Lower Manhattan.

The Deutsche Bank fire is one example, said advocates, of how the air quality can still be threatened.

Though the city is attempting to keep tabs on air quality downtown, its ability to treat victims of these contaminants hangs in limbo.

This year, the city received $108 million from Washington for health-related World Trade Center programs. But that funding didn't come without a fight.

Some say it's politics at play, but every year the city religiously lobbies for funding to treat Sept. 11 related illnesses and is denied a consistent funding stream. As a solution, the Bloomberg administration is pushing for the passage of the 9/11 Health and Compensation Act, which could guarantee long-term funding for this type of care.

Because it was a tragedy affecting the whole nation, the city says it is the federal government's responsibility to cover the cost. Annual funding guaranteed without begging will also be crucial if longer-term health effects, like cancer, start to appear (The city is currently studying whether some diseases which have passed their latency periods, like leukemia, are appearing in clusters).

"It really is a federal obligation, not a city obligation," said Deputy Mayor Ed Skyler at a press conference last week.

Bloomberg could not estimate how much funding the city would need to address the health issues. Though the administration has gained the endorsement of House Speaker Nancy Pelosi, advocates say passage of this legislation in the Senate is highly unlikely this year.