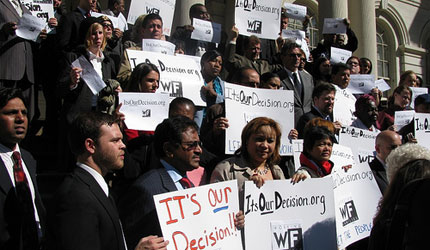 City Councilmember Letitia James, a progressive who was elected on the Working Families Party ticket, and State Senator Ruben Diaz Sr. of the New York Hispanic Clergy Organization disagree on many issues, But recently they used remarkably similar rhetoric to decry Mayor Michael Bloomberg's proposal to extend term limits without approval from the voters who twice imposed them. "My ancestors died for the right to vote," James said at a City Hall press conference on Oct. 6. "There's blood on the street with people who died for the right to vote and the mayor is ignoring all of that."

For his part, Diaz told the New York Times, "We will move all our people, do everything we can to oppose this. We have fought to be what we are now. So many people went to jail, so many people lost their life. Now this guy with his billions and says, 'I'm going to save you.' It's unfair. He should know that."

Norman Siegel, a civil rights attorney who plans to run for public advocate for a third time, organized a diverse press conference on Oct. 5 at City Hall to condemn Bloomberg's move. "We will not be silent as mayor and speaker [Christine Quinn] partner in undoing the people's will," he said.

Siegel is working on developing a legal case against the change. "The issue of whether the City Council can overrule a referendum is an open one," he said, adding that he believes earlier state cases that allowed legislative bodies to change term limits after a referendum "are not dispositive," so do not settle the matter.

The City Charter provides two ways of amending the limits on terms approved overwhelmingly in two voter referenda in the 1990s - holding another referendum and through a majority vote of the City Council affirmed by the mayor.

By collecting 50,000 valid signatures, voters can petition for a referendum to change the term limits law to appear on the November 2009 general election ballot -- the same ballot that could feature Bloomberg as a candidate for a third term. Under the charter, the public does not, it seems, have the authority to call for a vote before then, and November 2009 will be too late to undo the extension that the mayor and some council members hope to put in place this month. If the voters are truly riled up, their only recourse will be to withhold their votes from those who run for re-election when they would otherwise not have been able to.

The council, however, can call for a public referendum on the matter in a special election in March 2009. Council members such as James, Rosie Mendez and Bill de Blasio are pushing for this middle path - an extension of term limits to three terms, but only via public vote.

Either way, the debate over term limits will inevitably address civil rights issues. Under the federal Voting Rights Act of 1965, the U.S. Justice Department must approve any change in voting rules in New York City. Everyone seems to agree an extension of term limits -- whether by City Council action or in a special election -- qualifies as a rules change.

Some experts believe the department is unlikely to block the city -- whatever it decides to do. " The Bush Justice Department has routinely rubber-stamped applications for Voting Rights Act approval in ways that never existed during prior years," lawyer Richard Emery told the Daily News.

Randy Mastro, a deputy mayor under Rudy Giuliani who once chaired the city's Charter Revision Commission, laid out in a New York Times op-ed piece some of the legal arguments against the council and the mayor alone changing the term limits law. He cited City Charter prohibitions against "self-dealing" and the federal Voting Rights Act given that "such a change has the potential to undercut minority representation: There are now more members of minority groups serving on the council than there were before term limits were instituted."

Bloomberg thinks a special election on term limits might encounter more opposition at Justice than a simple vote in the council because, according to the mayor, special elections generally attract few voters.

"There's every reason why it would be tied up in court for years. The Voting Rights Act would fundamentally prevent [a special election] from being a realistic alternative," Bloomberg said at the Columbus Day Parade.

Election lawyer Jerry Goldfeder disagrees. "Why would the Department of Justice think that 51 people deciding makes a lot more sense than 100,000?" he has said.

Esmeralda Simmons, an attorney and director of the Center for Law and Social Justice at Medgar Evers College in Brooklyn, which is not taking a stand on the controversy, said she has her own concerns about the political calendar.

"No matter what they do, it has to be pre-cleared by the Justice Department" under the Voting Rights Act, she said. According to Simmons, the law stipulates that no change can go into effect for 60 days after the council and mayor act or let the electorate vote in March. Either change puts campaigns for public office, many of which are already well underway, in limbo - possibly until May.

The Right to Remain Silent?

For all the passionate rhetoric about the rights of voters, most civil rights groups have stayed on the sidelines of the big debate over term limits.

The New York Civil Liberties Union has yet to take a position. The New York State Conference of the NAACP, the civil rights giant coming up on its centenary, has not weighed in, nor has the Empire State Pride Agenda, the state lobby for gay, lesbian, bisexual and transgender rights. LatinoJustice PRLDEF (the brand new name for the Puerto Rican Legal Defense and Education Fund) has not taken a position, according to spokesperson John Garcia.

Council members who are African American, Latino, women and gay are on both sides of the debate. While Speaker Quinn (Democrat-Chelsea), an out lesbian and Irish-American, has dropped what was once her firm and supposedly final opposition to a change in the term limits law, her sister member of the lesbian caucus, Mendez, a Latina from the Lower East Side, will not support an extension without a referendum.

Mendez, like so many others, is not making a civil rights argument as much as appealing to fairness and process. "As a lawyer, I believe process is important, and this was done through a process of going to the electorate," she said. Phone calls and e-mails to her office are running "99 percent against" the council and mayor extending term limits without a vote by the people.

Some involved in civil rights and liberties issues see Bloomberg's campaign for another term as having broad implications for the rights of voters rather than disenfranchising any particular group based on prejudice.

"There are civil liberties issues on both sides," Donna Lieberman, the New York Civil Liberties Union's executive director, said in an e-mail. She has two big concerns. For one, she said, "Policy makers should address the question of ethics raised when government officials propose to change a law that would directly and materially benefit them by all but ensuring their own stays in office." Second, she continued, any process must be open and transparent. "The outcome of this decision must not be one that occurs through political dealings behind closed doors. There must be robust, free and honest debate that involves the public's many voices," Lieberman said.

Citizen Action of New York, which works on "economic, racial, social and environmental justice," has called Bloomberg and Quinn's effort on term limits, "an attack on our liberty, an attack on our rights and an attack on the system of government that the politicians are hired to protect."

The Working Families Party, a progressive third party, has set up It's Our Decision, a Web site to fight the change. It focuses more on process arguments than civil rights ones.

Yetta Kurland, a civil rights attorney who had begun a campaign for the council seat now occupied by Quinn, said, "One of the most powerful things our elected representatives do is to represent the will of the people. There needs to be a referendum to determine this issue." She is especially concerned about "the lack of a level playing field" if candidates have to go up against two-term incumbents with resources such as Quinn (substantial) and Bloomberg (unlimited). And there is a huge issue before the Campaign Finance Board about how expenditures will be counted and limited if candidates such as Quinn convert their campaigns from city or boroughwide races back to City Council contests.

If term limits are extended, civil rights may or may not be one of the central issues of the campaign. But at least some major constituencies will surely focus on whether incumbents who contravened the popular will to get on the ballot once again have in some sense violated the voting rights of hundreds of thousands of New Yorkers.