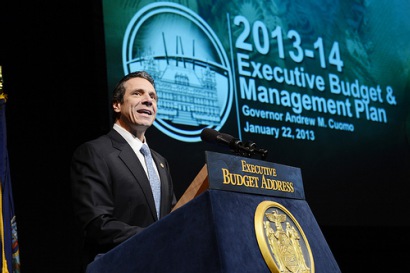 ALBANY, N.Y. — In his third budget address, Gov. Andrew Cuomo had a chance to do what he didn’t in his third State of the State Address — show off his conservative side.

But when he unveiled his $142.6 billion budget on Tuesday, Cuomo leaned on the financial stability of his first two years in office to back major initiatives that appeal to Democrats and progressives.

Cuomo’s budget increases spending by 1.9 percent and closes a $1.35 billion deficit. Education spending will go up by 4.4 percent and Medicaid by around 6.7 percent. Cuomo said that the city is set to receive $257.5 million from the budget — mostly in school aid.

“He wants to loosen the purse strings a little bit,” said Elizabath Lynam, director of state studies for the Citizens Budget Commission, of Cuomo’s budget plan. “It isn’t like anyone is going to say he let the train run off the tracks, but he has some things he wants to spend money on and he is going to do it.”

A lot of the governor’s budget plan focused on implementing the proposals of his State of the State: raising the minimum wage to $8.75 an hour; setting aside $35.9 million to enact parts of his landmark gun control legislation; and allocating $75 million to education initiatives. Cuomo also spent a great deal of time talking about the budgetary impact of Superstorm Sandy and its aftermath.

Lynam agreed. “People are used to marching to his drum now. He has done these things before. He has set spending caps,” she said. “ So now when you hear he wants to close a prison it isn’t shocking. Because he has done this before.”

Cuomo has used his previous two budgets to advocate for belt tightening and cuts that did not please unions, educators and state workers.

This year, Cuomo unveiled some cuts along those lines by advocating that two state prisons be shuttered: Beacon Correctional Facility in Dutchess County and Bayview Correctional Facility in Manhattan. Cuomo said it was unrealistic to keep Bayview open — the prison was closed because of flooding from Hurricane Sandy — since it costs $74,385 annually to keep each inmate there.

The budget projects a saving of $18.7 million from the closings from 2013 to 2014, and $62.1 million in the next fiscal year. That number includes proceeds from the sale of Bayview. Cuomo wants to shutter both facilities in the next 60 days, but that would require the approval of the Legislature.

The union representing state corrections officers blasted the governor’s proposal to shutter the two prisons, saying it would “displace” 160 of its members and their families. "Gov. Cuomo has, once again, decided to balance the budget on the backs on some of the hardest working New Yorkers,” said Donn Rowe, president of the state Correctional Officers and Police Benevolent Association. “It is a profoundly disappointing decision.”

The budget allocates $21 billion in spending for Sandy recovery – some of that money going toward communities as $2 billion grants. The budget allocates $2 million in mitigation for 2,000 miles of highway; $159 million for coastal mitigation; $6 million for the MTA to strengthen infrastructure against flooding; and $2 billion to help strengthen utilities. It also provides buyouts for homeowners who aren’t interested in rebuilding in flood zones.

“Every state project has a two-fold mandate,” Cuomo said. “Bring it back, but bring it back better than before and do the smart work that we need to do to make sure this doesn’t happen again.”

Budget Director Robert Megna told reporters that there is still some confusion surrounding Sandy relief because the details of the federal disaster aid package have yet to be worked out. “We assume that half of the Sandy Aid will go to New York,” Megna said. He noted that some of the money will go straight to communities affected by the storm and never pass through the state budget.

The budget includes $25 million to kick-start full-day pre-kindergarten programs in low-income districts. Another $20 million would go toward schools that want extended learning time, or to increase the school day. And $11 million would be set aside to reward New York’s best teachers in math and science with four-year stipends of $15,000. The city could receive $224 million in education aid if it agrees on and implements a teacher evaluation system by Sept. 1.

Lynam said the city, which missed a deadline to reach an agreement with the United Federation of Teachers over such a system, should take heed. “The governor has made it clear he will continue to link state aid to the teacher evaluation system,” she said.

Education advocates said Cuomo’s plan still does not meet the stipulations of the Campaign for Fiscal Equity settlement that requires New York to provide low-income districts with more funding. “This budget does not come close to getting us back on track," said Billy Easton of the Alliance for Quality Education in a statement.

A great deal of Cuomo’s budget was dedicated to programs designed to improve the upstate economy, including funding for an advertising program dedicated to marketing the region, $100 million in tax credits for the city of Buffalo and $60 million to keep that city’s professional football team in town.

Cuomo’s budget did not mention the contentious gas drilling process known as hydraulic fracturing, or fracking, at all. Pro-fracking groups issued statements insisting the state is losing out on billions of dollars by not legalizing fracking, while anti-fracking groups congratulated Cuomo for not including it in his budget plan as a “revenue raiser.” Cuomo is unlikely to make any declaration about fracking until the state’s environmental review of the process has been completed.

Cuomo also failed to mention the DREAM Act in his State of the State, as well as in his budget proposal. The Act would provide tuition assistance to illegal immigrants. The Assembly passed the measure last year and introduced it again this year.

The Independent Democratic Caucus issued a statement saying: “In order to build a better workforce, we also need to ensure that every bright young New Yorker can afford a college degree. That’s why we are committed to enacting a fully funded DREAM Act that will provide all of New York’s smartest and most ambitious students with access to the tuition assistance that they need. Our bill ensures that neither state budget constraints, nor a student’s immigration status, will ever stand in the way of a young student’s college dream.”

The IDC’s support of the measure is important. The breakaway Democrats could use their newfound power in the state Senate to bring the measure to a vote and get it passed despite Republican opposition.

The budget unveiling kicks off a three-month negotiating process with the Legislature. The budget is due on March 31. Typically, the Legislature holds separate hearings on each spending area of the budget and then is required by law to pair up into committees with both branches of the Legislature hashing out the differences in their budgets. These conference committees are designed to give the public a view of the real budget debates but legislators have skipped that part of the process under Cuomo in recent years.

It remains to be seen whether conference committees will occur, but Cuomo committed to making the budget process more transparent by unveiling a new website Tuesday that provides raw financial data and allows analysis and research into state spending.

Budget negotiations will be different this year because there will be more principles at the negotiating table. The Senate is now controlled through a sharing agreement between the IDC and Republicans. The Legislature's priorities don’t always become clear until back-room negotiations are finalized. Controversial measures do have a way of becoming part of the budget deal without much warning.

Overall, Lynam said she thinks legislators will be happy with the budget. “I think for the most they are part they are going to like it. The governor added education spending above the aid cap. I don’t think you are going to hear anyone in the Legislature complain about it,” she said. “And if they do, they will be in the minority.”