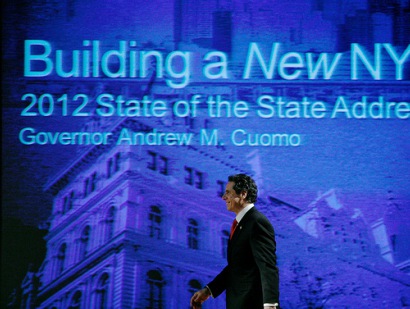 ALBANY, N.Y. — Modern governors have typically delivered their annual State of the State addresses in the massive, colorful, bright and ornamented Assembly chamber — the “people’s chamber,” as it is known. The exception to that rule is Gov. Andrew Cuomo, who has delivered each of his two State of the State addresses at the dismally cold and businesslike convention center at the Empire State Plaza.

Some saw the relocation of the address to the less austere setting of the convention center as a way to take away some of the Legislature’s perceived power over the governor or as a move by the governor to disassociate himself from a political body that has been marked by party squabbles and corruption.

For its part, the Cuomo administration has painted it as a way to bring government closer to citizens, though it could also be argued that by doing so, the speeches have become less about “state government” and more about the governor himself, a popular politician whose ambitions may one day lead him to national office. Whatever the reason, the setting fits Cuomo’s style: his addresses are more like controlled, corporate board presentations than fiery political speeches.

Last year’s State of the State was in that vein, with Cuomo on stage presenting his annual to-do list while comfortably playing the role of chief executive officer of the Empire State. It was also the closest to an outright failure Cuomo has ever come as a governor: Unlike his first State of the State address, there was no cohesive agenda set, no rallying cry for legislators or the public to follow. Cuomo touted the successes of the previous year and offered a smattering of economic plans, while avoiding hot topics. Like a band following up a debut smash success with a dud, Cuomo had hit a sophomore slump.

The legislative session that followed was slow — fewer bills were passed in last year’s session than in modern history. The culmination of Cuomo’s legislative efforts came in a last minute, late-night mega-deal on March 14, 2012, that came to be known as the “Big Ugly” and resulted in a messy deal on teacher evaluations, a new pension tier, the first step in legalizing casino gambling and state redistricting. All of it was negotiated in secret and passed while most of the public was not paying attention. A number of the measures were unpopular with unions and good government groups, though there were some notable exceptions.

After all was said and done, Cuomo remarked: “I believe this legislative session has been one of the most successful in modern political history.”

To accomplish his goals this year, Cuomo may not be able to negotiate in the back room: the issues facing the state are too big, from the costly recovery following Superstorm Sandy to heightened attention on gun control following the school massacre in Newtown, Conn. There are also high-level policy debates on campaign finance reform, the city's "stop-and-frisk" tactics and raising the minimum wage to $8.50 from $7.25.

Cuomo could also use this year's speech to reclaim some of the momentum and mandate he called on in his first State of the State to deliver on a number of campaign promises. That year, 2011, he  passed a new ethics law, reduced the number of prisons in the state, began reforming the juvenile justice system, and passed a tax cap. He also successfully championed the legalization of gay marriage, bringing him enormous popular support and national political attention.

Cuomo told reporters earlier this week that he plans on taking the gun control battle to the public — indeed, the New York Times reported Tuesday night that he would propose “one of the country’s most restrictive bans on assault weapons” — but insisted he had not avoided bringing other issue up in his address.

“We’ll do what I do every legislative session on every issue,” he said. “We take the priorities in the State of the State and then we communicate with the people of the state. I try and build political support. I believe if you have political support among the people, then the politicians follow. I think if you look at the track record we’ve had, that’s the way it worked. You introduce a proposal, everybody – legislative types – wait to see what happens. Does the balloon go up? Does the balloon go down? I’m blowing as hard as I can to make the balloon go up.”

The 2012 State of the State Scorecard

Cuomo seemed beaten by his successes in 2012's State of the State address. How could he one-up a year of triumphs? His speech dabbled and dipped into various fronts, he flirted with education saying he would be an advocate for students, all the while insulting unions and teachers, and again angering labor groups by pushing pension reform. He briefly mentioned public financing of elections in that speech, but failed to give any specifics beyond the fact that he admired the New York City model of campaign finance.

And there were notable omissions in the speech. There were no details regarding the redistricting battle that was in full swing at the time or the contentious issue of hydraulic fracturing, a type of gas drilling. He also didn’t demand anything of the Legislature. He seemed content to inform the public of his successes, but not interested in pressing them to get on board with his future goals.

If there is one lesson Cuomo learned from last year’s State of the State speech, it probably involves his focus on creating a casino and convention center in Queens, a joint venture with a Malaysian company known as the Genting Organization.

“We are pursuing a joint venture with the Genting Organization, a gaming development company, to complete this vision at the Aqueduct Racetrack venue,” Cuomo said during his address. “It is a $4 billion private investment that will generate tens of thousands of  jobs and economic activity that will ripple throughout the state. In addition to the new convention space, up to 3,000 hotel rooms will be developed. We will make New York the number one convention site in the nation.”

Cuomo’s surprising focus on a Queens casino and convention center was generally greeted positively by New York City officials, but it set journalists wondering why the governor would be suddenly so interested in such a development. The move smacked of a directionless politician looking to introduce grand plans without considering their impact.

“The political world wondered where he got the idea for a huge, Malaysian-financed convention center,” wrote Danny Hakim for the New York Times on June 6, 2012. “Now it appears clear. The idea originated at a fund-aiser for Mr. Cuomo in Westchester County, where gambling executives from a Malaysian company, Genting, presented to the governor a proposal for a convention center and casino complex at the Aqueduct racetrack in Queens.”

Will Cuomo Step Up?

This year, it seems unlikely Cuomo will repeat such a mistake. Cuomo has most been in his element when dealing with crisis. He marshaled the state for Hurricane Irene and then, last year, was focused with laser-like intensity on the recovery from Hurricane Sandy. It seems likely that this year's speech will deal heavily in executive actions that will address aspects of state government dysfunction that were highlighted by Sandy, from energy delivery to emergency response and perhaps even climate change.

Cuomo is also facing down the perceived gun violence crisis, which is not as simple as Sandy. Cuomo would have loved to have passed tougher gun laws in the immediate aftermath of the Sandy Hook Elementary School shootings, but negotiations with Senate Republicans appear to have collapsed. Senate Republicans issued a list of measures they support that would toughen penalties against those who use guns in the commission of a crime.

But Cuomo has asserted that he wants tougher regulation on what kinds of guns are sold in the state and how they are sold. Senate Republicans have blamed the Assembly Democrats for the breakdown in negotiations, saying that the Assembly won’t accept any tougher penalties for gun criminals.

Cuomo has said he will launch a very public campaign to pressure Senate Republicans into supporting a strengthened ban on assault weapons and other gun-control measures. But Cuomo has said that of other things he supports like campaign finance reform. Cuomo has not hit the road to sway the public on that issue.

There are some issues that we know Cuomo will discuss. Cuomo told reporters on Monday that he will propose new disclosure requirements regarding campaign finance. A wider disclosure law would likely be much easier to pass than a revamp of the entire system with public financing of campaigns — Senate Republicans have made it clear they will not consider a public financing system. But Cuomo has indicated he has not given up on a full overhaul.

Cuomo also plans to push the legalization of casino gambling in the state and push for a minimum wage increase, but its unclear what size of an increase he will propose. The New York Post reported on Monday that Cuomo will pledge not to raise taxes despite a projected $1 billion budget deficit.

Nevertheless, the State of the State should be a gauge of how committed Cuomo is to both these issues and how willing he is to rankle the feathers of his legislative partners. His speech comes as the legislative landscape is in flux, with the Senate Republicans having brokered an unusual power-sharing agreement with a breakaway group of Democrats to control the chamber.

It's quite possible that, as in the past, Cuomo will skirt the finer details of his issues. Cuomo has previously said that he won’t negotiate with the legislature in public. This tactic allows him some control over the boundaries of policy debates. And without setting a measure for success, Cuomo can’t fail in the public eye.

But if, as the New York Post reported on Monday, Cuomo chooses to deliver an “upbeat” speech — one that does not demand much of the Legislature and instead focuses on economic achievements — Cuomo runs the risk of letting the legislative agenda fall out of his grasp, with potential chaos looming in the State Senate. If Cuomo comes out strong on specific issues and appeals to the public to support him, it will be easier for him to win over the public and pressure the rabble of lawmakers that fill the austere chambers of the state capitol.

David King is Gotham Gazette's state government editor based out of Albany. Image of Cuomo striding across stage at the 2012 State of the State courtesy of the governor's office.