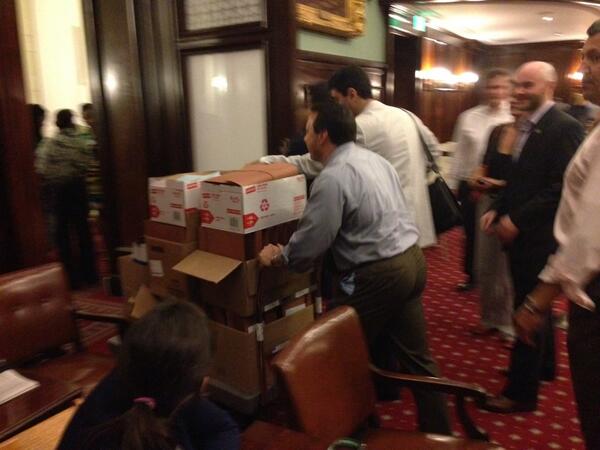 NEW YORK — It was 2:20 a.m. this morning when cheers and applause erupted in the City Council chambers.

Member Ruben Wills, of Queens, had cast the 34th vote to pass a police reform package that some believe could lead to an overhaul of stop-and-frisk and strengthen curbs on racial profiling by police officers.

Seconds after the vote tallies came in, Mayor Michael Bloomberg's office sent out a statement blasting the vote.

"These dangerous pieces of legislation will only hurt our police officers' ability to protect New Yorkers and sustain this tremendous record of accomplishment," Bloomberg wrote, promising to veto the legislation.

The vote to pass the Community Safety Act capped a busy night at the Council as members unanimously approved a $70 billion budget, overrode the mayor's veto of paid sick leave legislation and cleared the way for sidewalk cafes to serve brunch on Sundays after 10 a.m.

Originally scheduled to begin at 9 p.m., it wasn't until about a half hour before midnight that the 51 Council members convened for a three-hour voting session.

But the vast share of attention was on the bills to create an independent inspector general for the New York Police Department and to expand the city's ban on racial profiling by police officers.

Advocates said the legislation was important to decrease what they say is a disproportionate number of young black and Latino men being stopped and frisked.

"If you have never been black, Muslim or Asian in the city of New York," Williams asked of the bill's detractors, "please listen to us."

The inspector general bill received a comfortable 40 votes, with 11 Council members opposed. The extended ban on racial profiling, which Williams previously called the more important of the two, barely secured the 34 votes necessary to override a Bloomberg veto.

Williams co-sponsored the police reform bills with fellow Brooklyn Councilman Brad Lander, who after the meeting said he was optimistic that they could hold on to last night's votes. Lander said that Mayor Bloomberg and other vocal opponents of both bills had spent the better part of the week calling members to dissuade them from supporting either bill, both of which Bloomberg and Commissioner Ray Kelly have long called dangerous for New York City.

Lander said he hoped Bloomberg was "listening" — referring not just to the vote count but also the number of personal accounts given by Council members of how stop-and-frisk had affected them personally as well as their constituents.

All but one council member voted for the budget: Brooklyn Councilman Charles Barron opposed its passage, arguing that the budget can sometimes be "more brutal than the police."

The vote came about after Sunday's announcement between the Council and Bloomberg that the city would pass a budget before the July 1 deadline for the eight year in a row. To meet that deadline, however, the Council had to vote on it by Thursday night to give the mayor's office and comptroller two business days to look over the final package.

The Council also voted to override the mayor's veto of the long-delayed paid sick day bill, which mandates that businesses with 20 or more employees provide them with five days of paid leave as early as next summer. It passed again with 47 votes in favor and four against.

One bill did pass unanimously through the Council last night. All members approved a law that allows sidewalk cafes to open on Sundays at 10 a.m. for brunch.

"I know it is not the most important bill," Council Dan Garodnick, the sponsor of the bill, said early in the night to laughs from the chamber.