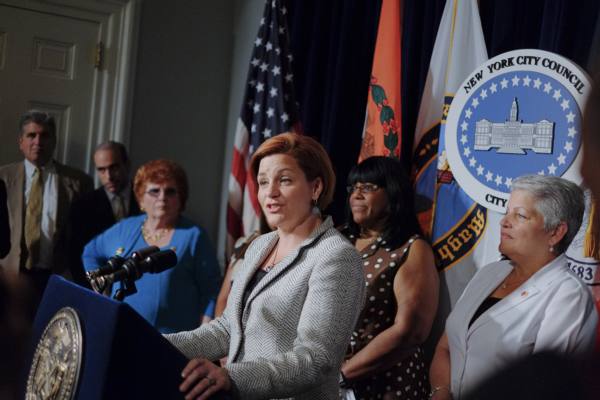 NEW YORK — The City Council has approved two bills that would extend new oversight to the medical examiner’s office.

The legislation — unanimously passed by the Council yesterday by 44 votes — was created following reports that some evidence was mishandled by the office’s technicians.

The bills create a new internal oversight mechanism and makes it so the office more frequently provides City Hall with up-to-date data. The move marks a shift in how the medical examiner reports any errors it finds in its work and make its practices publicly available on the city’s website.

“At the end of the day, we want the office of the chief medical examiner to be consistent with the reputation that it has — to be a trailblazer in the science of DNA and forensic pathology,” said Bronx Councilwoman Maria del Carmen Arroyo on Thursday.

OCME spokeswoman Ellen Borakove said in a statement that the office was working to improve its practices. “This additional level of transparency will ensure the full confidence of the public,” she said.

In January, the office announced it had to review more than 800 rape cases due to concerns that a lab technician mishandled evidence. The New York Times reported that a technician “failed to detect biological evidence when some actually existed.”

The technician, Serrita Mitchell, denied any wrongdoing. She later resigned.

The office’s deputy director of quality assurance was fired around the same time. The lab’s director, Mechthild Prinz, was temporarily suspended and the lab was soon audited by outside DNA expert firm Sorenson Forensics.

In April, former Deputy Lab Director Dr. Theresa Caragine resigned — a month before the New York Daily News revealed the Sorenson Forensics’ report findings, and that her department had both been ineffective and violated lab standards and protocol. She denied those charges.

Prinz, still suspended after the 800-plus cases were reopened, resigned on May 3, the day after the audit came out. Tim Kupferschmid has since been the DNA lab’s director.

The bills came about after the Council’s committees on health and women’s issues held two hearings in June. Councilwoman Maria del Carmen Arroyo, who chairs the health committee, undersold the sometimes tense exchanges, saying, “The concerns that were raised during hearings...were very concerning to us.”

Back in June, Arroyo told acting Chief Medical Examiner Barbara Sampson that “everyone in this room thinks you're inept.”

Arroyo added: “Two hearings in a row, you sit here and you don't have a handle on what happened.”

Sampson became acting chief medical examiner in February after Charles Hirsch stepped down after almost 25 years in charge of the OCME.

At the hearings, Sampson said she agreed with the Council’s goal of increasing the office’s accountability and transparency, but resisted any movement toward making certain information publicly available, as one of two Council bills does.

Intro 1058-A will require the office to post information not about specific cases but on procedures and standards used by lab workers, as well as on data related to proficiency of the lab’s technicians.

Along with the added transparency, Intro 1051-A will make it so that any cases where a worker’s accuracy and reliability are in question are followed up with what’s called a “root cause analysis” conducted by an internal committee.

Borakove, the office’s spokeswoman, confirmed that the lab already uses the technique. However, the new law makes it so that it becomes a requirement and extends where the review method is used.

Each root cause committee will have to report its findings to the the Council and mayor’s office. If committee finds any errors that affects ongoing investigations, the results would also be forwarded to both the respective district attorney’s office and defense counsel.

Reform advocates from around the city have praised the two bills as an opportunity for systemic reform. The Legal Aid Society, whose DNA unit has long been critical of the OCME, wrote a letter in support of the legislation.

“We hope that the significant troubles at the OCME have changed the culture of the agency toward one that more aggressively roots out its own problematic practices and is sufficiently open to admit mistakes when they do occur,” wrote Legal Aid Attorney-in-Chief Steven Banks.

Even the lawmakers, however, realize that the law cannot put an end to mistakes within the lab.

“It will not eliminate error,” Arroyo said. “But it will help us structure a way that we can weed it out and minimize the opportunity for error.”