The city Board of Elections has selected this optical scanner, Election Systems & Software DS200, to record and tabulate votes.

If all goes according to plan, New York City will have new voting machines this year. After years of delays, New York is making progress toward complying with the federal Help America Vote Act of 2002 (HAVA), which required states to update their voting systems in the aftermath of Florida's 2000 election debacle. New York is the last state to comply with the federal legislation and plans to have new machines in place by this year's primary elections. Questions about how the city selected its machines though, could create more delays and confusion in the months leading up to the September election.

Voters across the state, including in New York City, almost certainly will bid farewell to our decades-old Shoup lever machines. The New York City Board of Elections voted this month to purchase optical-scan voting machines from Elections Systems & Software. The city's contract, the largest for voting machines of all the counties in New York, is worth $60 million to $70 million, according to a spokesperson for the Board of Elections.

The new machines, the Election Systems & Software (ES&S) DS200 optical scanner, will read and tabulate paper ballots cast by voters on Election Day. The machines will be used in conjunction with the company's ES&S AutoMark ballot marking devices, which the city purchased last year to be placed in every poll site. The ballot marking devices allow all voters, including those with disabilities, to mark a paper ballot independently by using the machine's touch screen and accessibility functions, like a Braille keypad or audio recordings of the ballot for those with visibility impairments. The city placed devices in every poll site in 2009. Under the new system, optical scan machines will scan and count ballots filled out using the marking devices ballots marked by as well as those cast using pen. 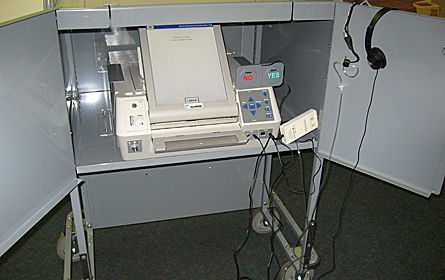 This device will allow ll voters, including those with disabilities, to mark their paper ballots independently.

Voters who do not use the ballot marking devices will vote by marking paper ballots, much as if they were taking a multiple choice exam. They will receive a paper ballot listing all the races, take it to a voting station and bubble in their choices with a pen provided by the board. Then the paper ballot will be fed into the optical scan machine, where it will be tabulated. Barring the voter has not incorrectly filled out the ballot or the machine does not detect an error, the machine will accept the ballot, and the voter is done.

While that all seems clear, the process that let the Board of Elections select the ESamp;S equipments seems somewhat murky. The board was choosing between ES&S and an optical scan machine made by Dominion Voting. The board selected the ES&S machines on Jan. 5, after holding public demonstrations where the public could see the two machines under consideration. The board held a hearing to allow the public to give their opinion about the two machines. Board commissioners also considered an evaluation report put together by board staff. During the meeting, it was reported that evaluating team's report had given the edge to ES&S.

Most other counties in the state, which had already made their decisions, selected the Dominion optical scan machine. The city board's president, Julie Dent, in a prepared press release http://www.votethenewwayny.com/press.html stated, "Ensuring that every New Yorker's vote is counted accurately remains the board's number one goal. We believe the DS200 poll site voting system will provide the accuracy and security that are essential in the voting process."

Now federal investigators are looking at that vote and the role of ES&S lobbyist Anthony Mangone. Mangone began working for ES&S in 2009. On Jan. 6 -- the day after the Board of Elections vote -- he was indicted by federal prosecutors on corruption charges connected to an incident in Yonkers where he allegedly bribed a City Council member to change her vote to support two major development projects she had once opposed. As a result of the investigation of the board's vote, two Republican commissioners l, J.C. Polanco from the Bronx and Judith Stupp from Queens, were subpoenaed, and the process is being reviewed by prosecutors.

If that weren’t enough, Dominion, ES&S's competing vendor, has filed suit against the city, claiming that the board did not comply with city and state procurement rules when it awarded the hefty contract to ES&S. In court documents Dominion said it found fault with the way the systems were judged and calls into questions the point system the board used for both systems. The board’s evaluation team awarded Dominion 3,395 points and ES&S 3,417 points in its final report.

With the system implementation already under such a tight timeline, this case and the federal investigation could have serious implications for the ability of the city to put its new machines in place. Furthermore, the city also is having difficulties with its selection of the poll booths where voters will take their ballot to mark their selections. It has selected a model bet contracting issues with the vendor of the booths have held things up. The board is finalizing its contracts for equipment as well as its plans for a public education campaign public education campaign, which will be critical to the success of the new voting system. So New Yorkers would be wise to prepare for the switch, but perhaps reserve their farewell to the Shoup lever machines just a bit longer.