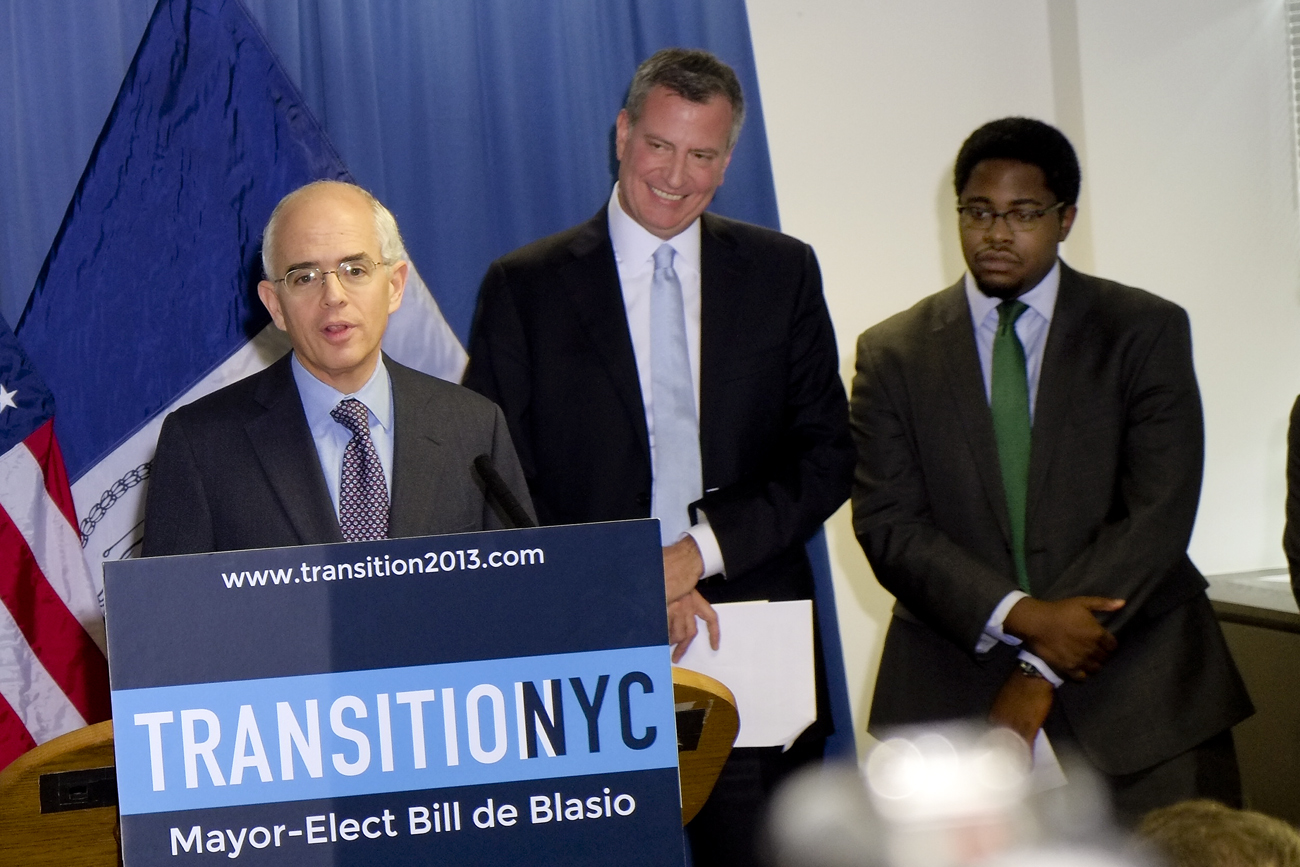 Mayor-elect Bill de Blasio has tapped a veteran of the Koch administration to serve as his second-in-command, charged with overseeing the “day-to-day operations of government.”

At a packed news conference near City Hall earlier today, de Blasio revealed the first picks of his incoming administration and promised that his circle of official advisers will operate differently compared to his predecessors.

“We want a government that looks like New York City, and that’s what we start today to create,” de Blasio said.

Besides naming long-time civil servant Anthony Shorris as his first deputy mayor, de Blasio announced that Dominic Williams will be Shorris’ chief of staff and Emma Wolfe would serve as director of intergovernmental affairs.

With less than a month until his inauguration, de Blasio vowed to set up a clear chain of command within his administration, with Shorris as his second-highest ranking official. While there have been previous “first deputy mayors,” including under the outgoing Mayor Michael Bloomberg, de Blasio’s redefinition of the title combines it with the power currently held by the director of operations.

De Blasio praised Shorris and his role in expanding the city’s public housing program as a former deputy director for the Office of Management and Budget during the Koch administration, and for his tenure as a deputy chancellor for operations with the Department of Education after the Sept. 11 attacks.

{pullquote}“This will be the person who will have my imprimatur to help make sure our agenda is implemented each and every day.”— Bill de Blasio{/pullquote}

Shorris’s long history with balancing budgets, de Blasio said, would play a role in big decisions that the administration faces from day one, including the expired municipal contracts that might cost the city as much as $8 billion in retroactive raises.

“When it’s an important decision, or a strategic decision, the buck stops right here. I will be a hands-on mayor making a lot of those decisions. But there’s a lot of things that have to happen operationally,” de Blasio said. “I want everyone to know where the buck stops on all those other situations. It stops with Tony Shorris.”

De Blasio declined to respond to questions from reporters about anticipated high-profile picks to lead the New York Police Department and the Department of Education. "We don't make announcements until we are 100 percent ready,” de Blasio said with a grin, adding that Shorris would play a role in the remaining appointments.

Currently the senior vice president, vice dean and chief of staff for New York University’s Langone Medical Center, Shorris’ faced some scrutiny back in 2003 during his tenure as deputy chancellor.

Shorris was advising 1199 SEIU’s National Benefit Fund while working for the city, which upset some observers but was ultimately cleared by the Conflict of Interest Board because the work was unrelated to his job with the Department of Education.