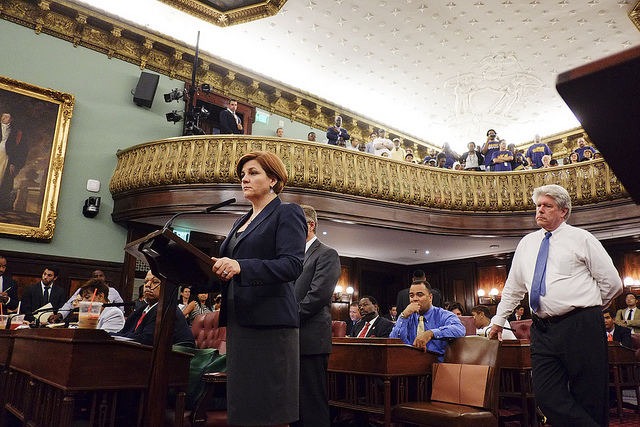 NEW YORK — The City Council is expected to mark its final all-member meeting of the year on a note of legislative triumph — and by saying goodbye to nearly two dozen outgoing colleagues.

Speaker Christine Quinn and 21 other Council members are departing City Hall. Outgoing members are scurrying to leave their lasting impressions for a Council that has already built up a legislative reputation for urban and social policy.

The city’s possible ban of foam food service products and increased regulation of electronic cigarettes are at the top of Thursday’s agenda of the Council’s last stated meeting of the year. With Mayor Michael Bloomberg’s endorsement of both pieces of legislation, observers say both are likely to succeed and round out both Bloomberg and Quinn’s time in office.

“I’m proud to say that, in getting these things to where they are, we didn’t sacrifice the quality of the legislation for speed,” Queens Councilman James Gennaro said. “We’re moving at a brisk pace, but it’ll be the same quality legislation that has been the hallmark of Chris Quinn’s City Council — comprehensive and with a lot of stakeholder involvement.”

Gennaro, the lead sponsor of the bill that would regulate electronic cigarettes, said he was cautiously optimistic about the legislation. The Democrat was also a leading force behind the recent law that increased the smoking age to 21 from 18.

If the e-cigarettes bill is passed, it will be his 47th bill to be enacted. The legislation makes it so that all rules on tobacco products would also apply to the vapor-based devices. If signed into law, it will add to the legacy of  both Bloomberg and Quinn as pioneering policymakers working to limit tobacco use.

As of mid-December, the Council still had 34 bills laid over in committee, otherwise known as legislative limbo.

Among them are bills to reform the elections runoff, a bill on social media privacy and another that would have enforced the city’s waste management plan by limiting capacity on waste trucks.

Any one of these bills might yet see a vote in the new Council. If any pending bill is not passed Thursday, they will die — at least until the new Council meets in January. The bill’s primary sponsor, if he or she is still in the Council when the session begins in 2014, can revive and reintroduce previous bills into committee.

If the legislation’s primary sponsor isn’t in the new Council, the secondary signatory may choose to revive it. But if neither primary nor secondary sponsors are around, any member can take the reins of the bills after two to three months into the New Year.

If a bill is passed by the Council but not signed by Mayor Bloomberg before Dec. 31, it still has 30 days since its passage to be signed or vetoed by whomever is at the mayor’s desk — be it Bloomberg or de Blasio.

A spokeswoman for Bloomberg did not specify how close the last bill signing might be to de Blasio’s inauguration on New Year’s Day.

If the Council passes a bill on Dec. 19, the Mayor has until Jan. 18 to veto a bill. As usual, any bills passed by the Council but unchallenged by the mayor automatically become law according to whatever timeline outlined by a respective bill.

If Bloomberg does happen to veto any bills passed by the Council before the end of the year — however unlikely — the Council still needs to wait to receive the mayor’s veto. Because the same Council that passed the bill isn’t scheduled to meet again, the new Council will need to receive the veto, after which members have 30 days to override.

The speaker’s office has had final say on which bills the Council deliberates since Quinn was raised to the speaker’s seat in 2006. In the last three years, Bloomberg signed 245 bills passed through Council into law.

It took three years for the Council to vote on and approve a paid sick bill that satisfied both labor groups and the business community, a compromise largely attributed to the speaker’s office. The law goes into effect on April 1, 2014.

Quinn was widely criticized by advocates even when the bill was passed, given the time it took to come to an agreement. Comparatively, the last few months have been easier for lawmakers.

The outgoing speaker publicly invited her colleagues on the Council to put forth any legislative priorities before the year’s end. She expressly extended the offer to those who — like her — would not be back in 2014.

“She asked everybody what bills we want passed. I had something like 40 bills on the list, so we whittled them down,” joked Councilwoman Gale Brewer, who is moving on to the Manhattan Borough President’s office and was the primary sponsor of the paid sick leave bill.

“It’s very encouraging. I’m very excited, and I’m very appreciative of the speaker,” said Brewer, who has already ushered in 34 bills over the last decade — including paid sick leave.