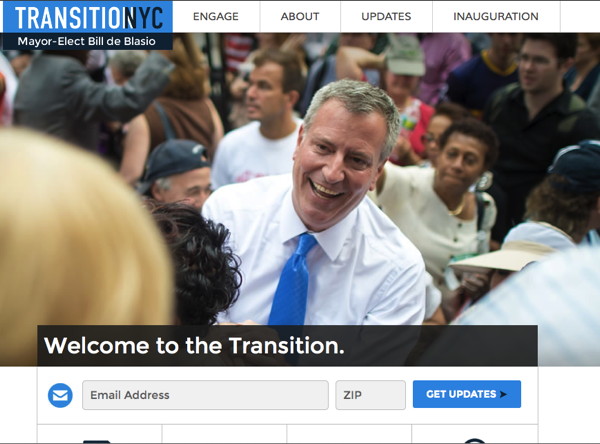 A Latino advocacy organization is calling attention to what it says is a “disturbing pattern” of “marginal inclusion” of Hispanics among Mayor-elect Bill de Blasio’s top-level appointments.

In a letter sent over the weekend, Angelo Falcón of the National Institute for Latino Policy said his goal was not to impose “some sort of Latino quota system” for de Blasio appointments but to “point out that there appears to be a blind spot.”

While De Blasio announced the appointment of Lillian Barrios-Paoli as a deputy mayor for human and health services and Gladys Carrion as commissioner of the Administration for Children’s Services — both Hispanics — in recent days, his appointees have so far been, well, predominantly white.

Just today, the mayor-elect announced that Alicia Glen, who is currently employed at Goldman Sachs, would serve as his new deputy mayor for housing and economic development. Laura Santucci, who is running the transition team, will serve as his chief of staff.

He has also appointed Bill Bratton as police commissioner and Dean Fuleihan as budget director.

To be fair, it’s still early in the transition and there are a number of high-profile positions yet to be filled — including schools chancellor.

Be that as it may, Falcon points out that his organization has “documented the underrepresentation of Latinos” in both the mayor-elect’s Transition Team and Inaugural Committee, as well as among members of a recently announced campaign to push for universal pre-kindergarten programs.

Falcon said his group wants to make sure de Blasio doesn’t make the same mistakes as the Bloomberg administration, which failed to create a cabinet that represented the diversity of the city.

“We are monitoring your track record with Latino appointments at this early stage to do what we can to point out to you personally the importance of addressing this problem fully to make up for more than 20 years of the marginalization of our community from this city's governance,” Falcon wrote in his letter.