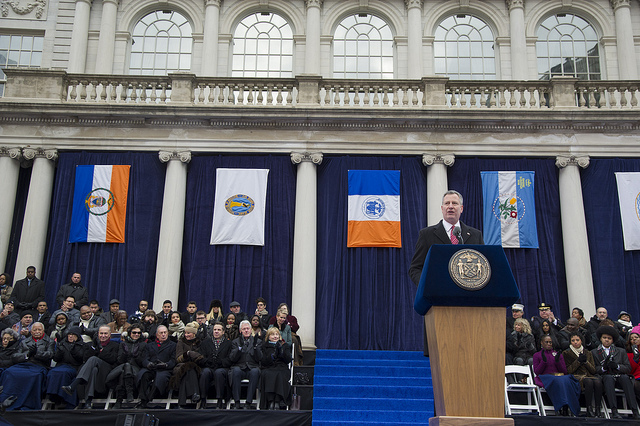 “This income inequality problem bedevils the entire country,” said former President Bill Clinton in front of City Hall today. “But it is not just a moral outrage, it’s a horrible constraint on economic growth … we cannot go forward if we don't do it together.”

Clinton swore in de Blasio in front of the 5,000 New Yorkers who braved the afternoon’s windy chill today — the temperature was in the low 30s and some crowd members were offered blankets. Among the attendees were former Secretary of State Hillary Clinton, Gov. Andrew Cuomo and former Democratic National Committee Chairman Howard Dean.

Former Mayor David Dinkins and de Blasio’s immediate predecessor, Michael Bloomberg, were also on hand, as were members of the City Council, both the incoming and previous class. Some of New York’s Congressional delegation were also in attendance, including Sen. Chuck Schumer and Reps. Carolyn Maloney and Jerrold Nadler.

See highlights from the 2014 Inauguration here

It was noted musician and activist Harry Belafonte who kicked off the day’s events.

An early de Blasio supporter, Belafonte invoked the names of past leaders on progressive issues such as Franklin Delano Roosevelt, Martin Luther King Jr, Cesar Chavez and others as the template for the new mayor.

"Today begins a new era, a transformative journey of hope on the road to promise. We’ve seen America wrestle with her conscience. We’ve seen her struggle to become her better self. I think the solution to what most people want America to become resides here in New York. We can become America's DNA for the future,” Belafonte said before praising de Blasio’s victory last fall.

“We must not let him fail,” he added.

Sworn in on a Bible once owned by Roosevelt and held by wife Chirlane McCray, de Blasio committed to keeping his word, repeating his promises on a litany of issues with a mantra of “we won't wait; we'll do it now.”

“Now I know there are those who think that what I said during the campaign was just rhetoric, just ‘political talk’ in the interest of getting elected.  There are some who think now, as we turn to governing – well, things will continue pretty much like they always have,” de Blasio said while joined on stage by daughter Chiara, 19, and son Dante, 16. The family trekked to City Hall from their Park Slope, Brooklyn, home by subway.

“So let me be clear: when I said we would take dead aim at the ‘Tale of Two Cities,’ I meant it. And we will do it. I will honor the faith and trust you have placed in me. And we will give life to the hope of so many in our city. We will succeed as ‘One City.’ We know this won’t be easy. It will require all that we can muster, and it won’t be accomplished only by me. It will be accomplished by all of us — those of us here today, and millions of everyday New Yorkers in every corner of our city.”

De Blasio’s fellow citywide counterparts echoed his progressive priorities. Letitia James, who replaces him as the city’s newest public advocate and is the first woman of color elected to serve a citywide post, called the status quo “a gilded age of inequality” but one with hope.

James said she saw that hope through the eyes of 11-year-old Dasani Coats, the central figure in The New York Times’ widely read investigation into the plight of the city’s homeless children. Coates, who resides in the Council district most recently represented by James, joined the new public advocate on stage as she was sworn in.

“If working people aren’t getting their fair share, if our government isn’t securing the reforms New Yorkers were promised, you better believe that Dasani and I will stand up – that all of us will stand up – and call out anyone and anything that stands in the way of progress,” James said.

New Comptroller Scott Stringer made vows of his own, renewing his promise to turn his office into a think tank for innovation while protecting the city’s fiscal solvency.

“I will audit every city agency to root out waste and abuse. I will work every day to build our pension fund so that we can invest more resources in priorities that matter,” Stringer said in his prepared remarks.

The new comptroller added that he would work with other “institutional investors around the country” to keep companies in line with workplace safety and diversity, as well as environmental standards.

Even as New York City’s government still transitions from one to the next, the New Yorkers who were there to celebrate the new government leaders left City Hall grounds cold but optimistic.

Roberta Reid, a teacher in the Bronx for 21 years, said she had faith in de Blasio’s promise that his administration will work to be receptive towards all New Yorkers.

“It sets for me a more promising tone in that there will be inclusion for people to really make their voices known,” she said. “But it won’t be without the input of the constituents — people who voted for him and people who didn’t vote for him. He can’t do it alone.”