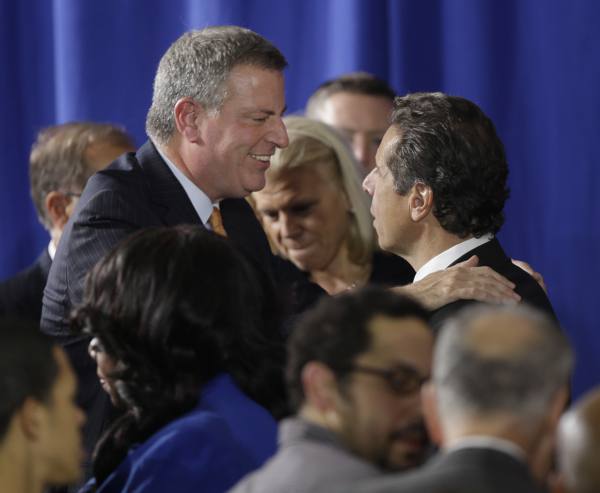 Albany, N.Y. – As Gov. Andrew Cuomo outlined his future priorities in his State of the State address, one member of the largely supportive audience listened intently for mention of the state’s largest city.

What New York City Mayor Bill de Blasio heard, however, was largely a Cuomo pledge to reduce taxes for residents and businesses and create jobs, particularly in Upstate communities.

Cuomo used Wednesday's address to build momentum for his reelection bid this year and position himself as a potential 2016 presidential candidate. De Blasio came to Albany for the first time mayor and looked to make hay of the political capital he earned during his landslide victory in November.

The governor solidified his bona fides as a fiscal conservative with a progressive social bent. He made it clear he will focus on rebuilding his support Upstate and in western New York.

Cuomo’s poll numbers took a dive Upstate last year when he pushed for gun regulations in the NY SAFE Act. To combat the damage, Cuomo proposed tax plans designed to attract new businesses to the region. He focused on measures to boost manufacturing and development in Buffalo and Rochester. He also pledged to bolster upstate tourism and touted the passage of legislation allowing for casinos in the region.

Though Cuomo didn’t mention de Blasio during his hour-log address, he did voice support for universal pre-kindergarten – the mayor’s signature issue. He didn’t say how the state would finance it.

"It is time to fulfill the state's goal of truly universal pre-kindergarten access for all children," Cuomo said. The governor’s State of the State policy book, which sometimes provides more details on his agenda, also fails to say how that goal would be financed.

The fact that Cuomo’s mention of pre-k came after a long discussion about tax cuts made it seem all the less likely that he will support de Blasio’s plan to raise taxes on New York City’s wealthy. The state legislature would have to allow the city to implement such a tax.

“We have to get this done for the people of New York City and I echo what Speaker Silver said, we are simply asking for the right to tax ourselves,” de Blasio said after meeting with Silver.

Just as his predecessors have, de Blasio held a news conference after Cuomo’s speech and heaped praise on its “progressive themes.”

“I think it’s been a very positive day as I prepare to build a very constructive working relationship with all the leaders in Albany.” de Blasio said. “I think this speech will be a great road-map for so much of our work going forward.”

De Blasio countered the idea that he had been slighted by Cuomo in any way by saying that he speaks to the governor on a regular basis. He added that was encouraged by Cuomo’s remarks about pre-k.

“It was a fantastic statement,” he said. “It’s absolutely the right goal.“

De Blasio suggested that Cuomo’s proposed tax cuts did not mean he would be against a tax hike for the city’s wealthy citizens.

“I think the state has a vision for the state and I respect that vision,” de Blasio said. “We have a vision for our own city and we simply want an acknowledgement of that so we can move forward.”

The mayor also went out of his way to praise Cuomo’s plans for western and upstate New York.

“I appreciate the changes of the upstate economy and as governor he is absolutely right to focus on those challenges,” he said. “As a mayor, you can’t help but feel solidarity with your fellow mayors. Buffalo’s been through a lot and I think the governor’s right to focus on being to bring Buffalo back.”

Cuomo didn’t ignore downstate issues during his address. He mentioned the city’s reviled airports -- JFK and La Guardia -- and proposed that the state take over construction projects to improve them. He proposed an expansion of Metro-North with stops in the Bronx and a connection to Pennsylvania Station. He also proposed a renters tax credit as part of his tax package. But issues important to New York City residents, such as immigration reform, stop-and-frisk police tactics and the city’s troubled hospital system were not mentioned.

Politicians, pundits and journalists watched the governor’s speech with an eye toward what it might reveal about the future relationship between Cuomo and de Blasio.

Douglas Muzzio, a professor in the School of Public Affairs at Baruch College, said it isn’t surprising that Cuomo was light on specifics for the city.

“It is absolutely incumbent on the mayor for him to make his case to the governor and both houses of the legislature for what he wants and he has time to do that,” Muzzio said. “They should be working collaboratively behind the scenes because it is in the best interest of the people of New York.”

It may not be until after de Blasio sets his agenda in his State of the City address and the legislature is in full swing that New Yorkers get an idea as to whether his good friend Governor Cuomo supports it.

Muzzio and other political observers found Cuomo’s speech to be a “grab bag” of initiatives that lacked the drive of last-year’s speech that had the backdrop of Superstorm Sandy and the Sandy Hook shooting. Muzzio said he felt it was hard to maintain a passionate undertone while “giving a laundry list of initiatives.”

From a medical marijuana program and juvenile justice reforms to incentives for downsizing local government and tax reduction it felt like Cuomo was trying to cover all political spectrums. The governor also urged legislators to support his ethics reforms. Cuomo took on a conciliatory tone asking legislators to help him protect the public’s trust in government by enacting reforms recommended by the Moreland Commission on Public Corruption.