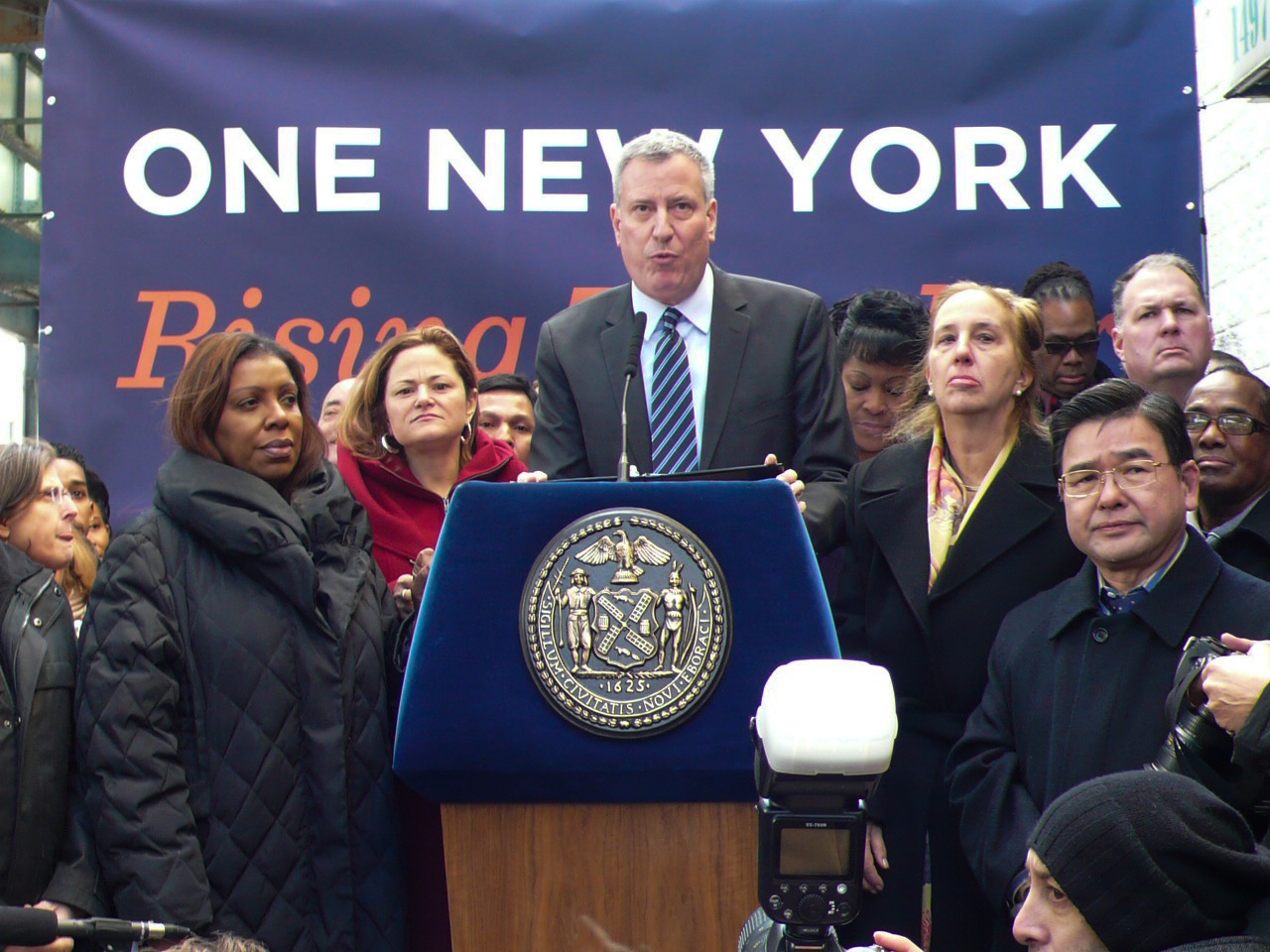 Backed by a retinue of political allies, Mayor Bill de Blasio unveiled the first major plank of his progressive agenda today with a proposal to broaden the controversial paid sick leave law passed last year by the City Council.

The mayor framed the proposed bill's importance with the Dickensian flair from his election campaign.

"We talked a lot about the 'Tale of Two Cities.' Our goal is to create one city where everyone can rise together," he said. "And this is one of the steps we have to take to make that possible. And the time to act is now."

De Blasio described the proposal as "the dramatic expansion" of paid sick leave legislation, which was scaled back last year to quell the business community's concerns that it would create an economic burden.

Standing in front of a small Ecuadorian restaurant in Bushwick, the mayor said the bill would build on a compromised version passed last year. That bill is slated to take effect in April unless it is superceded by the mayor's proposal.

The elected leaders stood in front of a block-spanning banner proclaiming "One New York Rising Together." Local supporters and passersby crowded the event and the block across the street. Their chants of "si se puede" halted when elevated trains passed overhead.

The bill adopted last March under then Speaker Christine Quinn will make New Yorkers eligible for a minimum of five paid sick days. It would apply equally to part- and full-time employees, with the hours being accrued by workers.

The proposed bill provides for the same number of paid sick days, but eliminates many elements that business leaders had lobbied for, such as limiting the law to businesses with 15 or more employees and creating a trigger that stalls the bill if the city's economy weakens. The mayor's proposed law would apply to businesses with more than five employees.

Neither de Blasio nor Mark-Viverito were able to say when a new, modified law would be in place, given that the Council still needs to sort itself out organizationally. However, they said the Council would move on the bill fast enough to expand sick-leave coverage to an additional 355,000 workers before the year's end.

Nancy Ploeger, president of the Manhattan Chamber of Commerce, said that her office fielded calls of concern soon after the early reports of today's announcment. She said that the chamber has not seen the bill's language, but looked foward to having an opporunity to help the Council draft "fair, equitable and balanced bills."

"As we know, this was one of the mayor’s talking points during the election," Ploeger said. "It is not coming as a surprise that this is one of his first directives. We will be talking with the administration to find out the details of the new language and re-introduction of the bill. Our chamber continues to be concerned with the costs of doing business in NYC and the burdens placed on the backs of the small business owners."

At the announcement, de Blasio acknowledged that small business would have a place at the table during the Council's consideration of the bill, but noted that the conversation began when former Councilwoman Gale Brewer, now Manhattan borough president, introduced the first iteration of the bill.

Mark-Viverito agreed, adding that the process is essentially the reintroduction of an already discussed and debated bill. The end result of those discussions, however, was what the Council passed last year under Quinn -- a result that left many of the original sponsors dissatisfied, she said.

"Clearly we understand that there are going to be those who are going to argue against it. It's been heard before," she said.