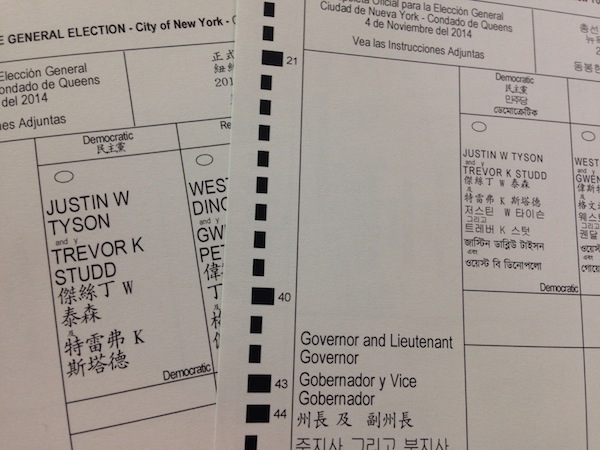 Tiny typeface that rendered election ballots nearly unreadable for many voters is a thing of the past.

The New York City Board of Elections voted unanimously today to proceed with work on a trilingual ballot that will eliminate the use of a six-point font, which allowed ballots to be printed in five languages.

Politicians, good government groups and voters hammered the board last November with complaints about illegible ballots.

"I kind of don't like using the words 'six-point font' anymore because it gives me hives," said the board's Executive Director Michael Ryan.

Ryan explained that the ballot will make its debut in the November general election. The state still needs to sort out its primary day schedule, but Ryan contends that the primary ballots are likely to be less crowded and less likely to need the font modifications.

The changes will come at no additional cost to taxpayers, Ryan said. The board still needs to evaluate elections expenses regardless of the proposed ballot alterations, but the number of printed ballots would remain the same, he said.

"What we did here was we adopted something that can be a more uniform standard throughout the city that accommodates the needs of the borough of Queens, primarily, but also in smaller areas of Brooklyn and Manhattan," Ryan said. "And at the same time, represents the candidate’s name in a readable form for entire city."

The ballot used in the general election was the board's worst-case scenario. Approximately 60 polling sites in Queens needed all five languages and dictated how the ballot appeared in more than 12,000 sites. The board at the time debated increasing font size for districts that didn't require all five languages but was stopped short. Attorneys for the city counseled that doing so might violate of the equal protection clause of the Constitution.

The board will now have more room, both figuratively and on the printed page. New ballots will sport a 10-point font and feature up to three languages. Each of the five required languages will still be used, but with three different variations.

Election districts in the Bronx and Staten Island, which only require English and Spanish, won't use the trilingual ballots, nor will most districts in Brooklyn and Manhattan. A smattering of districts in the latter two can expect to see the English, Spanish and Chinese variation.

Poll workers are not allowed to ask voters whether they have a ballot preference, making it incumbent upon the voter to request a specific ballot language.

Ryan attempted to allay concerns about the time needed to train poll worker on the new ballots, particularly in the Queens districts that will juggle the three different ballots.

"All of those details have not been worked out," he told the commissioners. "This is the horse; the rest of it is the cart."