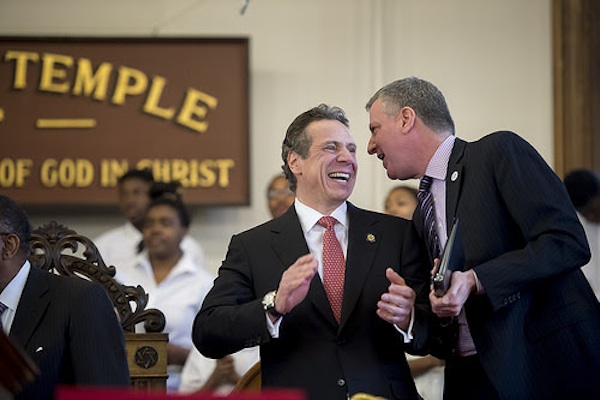 New York City Mayor Bill de Blasio and his allies are forging ahead with their campaign to tax the wealthy to finance universal pre-kindergarten despite having been effectively defeated by the governor and the Republican state Senate leader.

Gov. Andrew Cuomo has tried to defuse de Blasio's efforts by proposing his own universal pre-k program, but de Blasio and his allies say the plan fails to provide enough dedicated funding to sustain a statewide pre-k program.

Amendments to the budget were due this week and the Cuomo administration didn't add any funding for their pre-k program. De Blasio's allies were quick to jump on this point.

"Experts estimate it will cost more than a billion dollars annually to implement high-quality pre-k statewide,” Melanie Hartzog, executive director of Children's Defense Fund NY, said in a written statement. “We are disappointed that the Executive Budget still does not include this critical funding.

“New York City’s plan for universal high-quality pre-k is the only plan that fully funds these programs with a reliable funding stream. We urge the Legislature to pass this plan."

Some politicos are miffed that de Blasio continues to challenge Cuomo on pre-k despite Senate Republican co-leader Dean Skelos’ vow to prevent a vote on the mayor’s plan.

But Doug Muzzio, professor of political science at Baruch College, views the mayor’s stand on the issue as the start of a sustained post-election campaign designed to deliver on campaign promises.

"De Blasio is doing street stuff, mobilizing interest groups, really putting on a lot of pressure," Muzzio said. "He isn't using a one-front approach like Bloomberg where he is told 'no' and just goes away. In a sense, this is a part of a permanent campaign."

At the same time, Cuomo is launching a re-election campaign designed to produce a lopsided victory by appealing to a broad base that crosses political lines. The governor is looking to borrow some of de Blasio's political capital with progressives while also appearing more moderate to conservative voters, Muzzio said,

"Clearly de Blasio is an ambitious guy and they may be in each others way – not just policy-wise but in terms of their political futures,” he said, “So Cuomo's got to counterpunch, but neither of them has to throw overhand rights.”

Muzzio says de Blasio and Cuomo have been fairly restrained in their conflict despite how much power they wield, and they are doing so for the sake of the party and perhaps their friendship.

Cuomo and de Blasio appeared together recently at a church event for the Black, Puerto Rican, Hispanic and Asian Legislative Caucus where the governor announced an initiative to offer a college education to prison inmates. Prominent members of the caucus and de Blasio have worked together on issues important to New York City legislators, such as universal pre-k, a measure to allow the city to set its own minimum wage, the DREAM Act and licenses for undocumented immigrants.

Cuomo's college-for-prisoners proposal may have been an attempt by the governor to give the caucus something they want without taking on an issue that would require an expenditure of even more of his political capital, such as driver's licenses for undocumented residents or the DREAM Act. Or it might have been political maneuvering to clear the way for a deal on one of those issues. Either way, Cuomo is in the driver's seat, Muzzio said.

But unlike de Blasio, Cuomo cannot afford to position himself as a progressive, particularly in an election year. Several prominent Republicans have already dubbed Cuomo's college for inmates plan as “Attica University” and attacked it as a waste of tax dollars. It's created a stir Upstate – the kind of agitation Cuomo doesn't need. Cuomo knows progressives aren't going cost him the election and progressive legislators know better than to move against him, Muzzio said.

"He’s safe with them in an election year in so far as whoever is the Republican opponent is someone they just aren't going to vote for," he said. "You’re not going cross him (Cuomo) because he isn't going to lose. He clearly wants to satisfy as many constituents as he can, but he has some tightrope walking to do. If anyone can do it, he can because he has done it before."