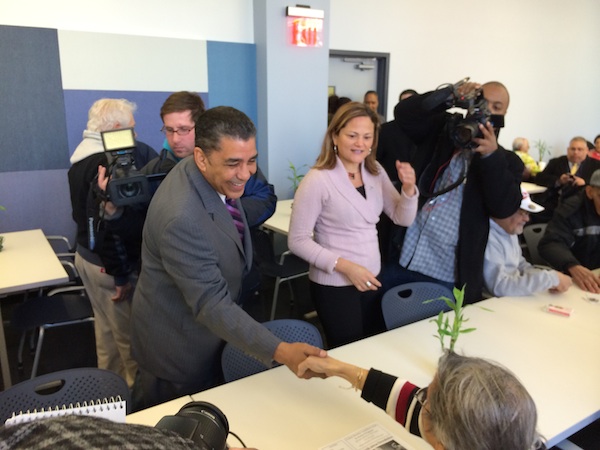 State Sen. Adriano Espaillat’s challenge of Rep. Charlie Rangel isn’t exactly a bright spot for Democrats as they attempt to reclaim a majority in the Senate, but the race could spotlight an issue dear to progressive Democrats: immigration reform.

Espaillat has championed the New York DREAM Act and with the federal version stagnating in Washington it is likely the issue will become a focus of what is going to be one of the hottest congressional races of the year.

“You have what is certainly going to be one of the most watched congressional races this year and Senator Espaillat has been out in front pushing the DREAM Act with me,” said Sen. Jose Peralta, who is the bill’s sponsor in the state Senate. The bill would provide tuition assistance to the children of undocumented immigrants.

“The question will be asked: ‘What has Charlie done over the years for the DREAM Act?’” Peralta said. “So I think this will have the positive effect of shining a light on the DREAM Act, especially since the act hasn’t moved on a federal level.”

Rangel, an early supporter of the DREAM Act, has seen his district’s demographics change dramatically over the years. Much of the change was the result of redistricting. Rangel’s 15th congressional district, mostly in upper Manhattan, was heavily populated with African-Americans. In his new 13th congressional district, which includes a good portion of the South Bronx, Latinos outnumber African-Americans 2 to 1.

It was no secret that Espaillat was going to challenge the 83-year-old Rangel this year. He lost to the 23-term incumbent two years ago by less than 1,000 votes. The two Democrats are headed for a primary election face-off in June.

Rangel has been trying to shore up his Latino support, but Espaillat would become the first Dominican-born member of Congress. And Espaillat, who has been laser-focused on immigration issues during his time in Albany, seems poised to build a campaign around those issues.

For several years, DREAM Act supporters have watched the issue attract attention in Albany only to stall in the legislature. They’ve been heartened by recent comments made by Gov. Andrew Cuomo, Mayor Bill de Blasio and state Sen. Jeff Klein.

Furthermore, supporters say things could change this year if the act becomes an issue in a heated congressional race that is certain to attract national news media coverage.