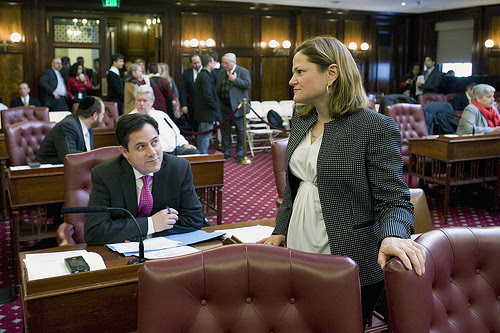 City Councilman Dan Garodnick and Speaker Melissa Mark Viverito chat prior to a webcast of a Council meeting.

A law requiring all city agencies, commissions and task forces to webcast their public meetings and hearings took effect this week, but most of those entities are failing to comply.

While the Mayor Bill de Blasio administration works to change that, the City Council is moving forward with a bill that would expand the law to cover the city's 59 community boards.

Neither the existing law nor its proposed expansion faces any organized opposition – both have been heralded as a step in the right direction for government transparency – but there are concerns about the nuts and bolts.

Big questions remain about Local Law 103, commonly referred to as the webcast law. It’s unclear which agencies must comply, when agencies will actually start webcasting and who is going to pay for it. New Yorkers also wonder what it's all going to look and sound like.

Representatives of many of the city's community boards are in favor of more transparency and showcasing what they do to an online audience, but the boards don't want to be forced to pay for the webcasts.

Though not known as a bastion of transparency, Albany has had a webcasting law on the books for seven years. On his first day in office in 2007, Gov. Eliot Spitzer signed an executive order requiring all state agencies to record video of public meetings (those that fall under the state's Open Meetings Law) to be streamed and archived online. The broadcast quality varies among agencies, but overall the system has been relatively successful.

A few months after Spitzer's executive order, then-Councilwoman Gale Brewer, who was recently elected Manhattan borough president, introduced a bill that would require New York City to follow the state's lead. The bill never made it out of committee.

The Council, however, started webcasting its meetings in 2010. That same year, Brewer introduced another version of her bill, which languished until last year when it was unanimously approved. Mayor Michael Bloomberg signed it into law in his final month in office.

The webcast law requires "each city agency, committee, commission and task force and the council" to record video of its public meetings to post online within 72 hours and, "where practicable," live-stream the video online.

Before the bill passed last year, the Council's Finance Division based its Fiscal Impact Statement on the proposal on “18 City entities that do not currently webcast open meetings.” The number seems to be far greater than that.

At an oversight hearing last month, Jeffrey Merritt, a senior advisor to the mayor, said that less than 5 percent of more than 200 city boards and commissions webcast their meetings.

The de Blasio administration says it is committed to seeing that agencies comply with the webcast law.

"We have a lot of work ahead of us to make the city more transparent and accessible and I'm confident that our city agencies are up for this challenge," Merritt said.

The law does not name an agency in charge of compliance, which explains some of the confusion.

Merritt said the administration is working with the Law Department to determine what entities are supposed to comply. However, a Law Department spokesman told the Gotham Gazette that the city Department of Information Technology & Telecommunications will handle all compliance issues.

According to DoITT, there is no single enforcement agency, but it is working with the Law Department and the Mayor’s Office of Media and Entertainment to help agencies with compliance. All city entities subject to the state Open Meetings Law are subject to the webcast law, according to the DoITT.

That's news for some governing bodies.

A spokesman for Bronx Borough President Ruben Diaz Jr. said their office is unaware that their board meetings are subject to the law and are reviewing it. Board meetings are videotaped and aired by BronxNet, but the recordings are not posted online within 72 hours.

The cost of webcasting city government will depend on who must comply with the law. The Council's Finance Division estimated it would cost $180,000 to equip and train staff for the 18 city agencies mentioned in its report and an additional $100,000 in annual expenses. Costs would escalate if more than those 18 agencies are subject to the law, as the de Blasio administration and Citizens Union suggest.

Reinvent Albany, an organization that promotes open government, urged the de Blasio administration to focus on 30 agencies and commissions that hold regular meetings in the same venue. It estimates that retaining a vendor to get those 30 agencies up and running would cost between $110,000 and $150,000 per year.

The administration is reviewing equipment at various agencies to take inventory of what needs to be purchased, Merritt said. The city could opt to solicit bids from private companies for a webcasting system for all agencies subject to the law.

The Council webcasts its meetings with a high-end system that cost $1.5 million, financed with cable franchise money. The city's Campaign Finance Board, one of the 14 agencies that already webcasts its meetings, pays an online video service, Livestream, $350 per month to air its webcasts.

Brewer estimates it would cost about $20,000 to purchase equipment to record Manhattan Borough Board meetings. She argues that the benefits of webcasting "far outweigh the costs," particularly because many meetings occur while the average New Yorker is working.

"This provides an important level of transparency and oversight, and should also lead to a better-informed electorate," Brewer said, adding that agencies should be offered financial help to offset the costs of webcasting.

It's difficult to gauge how many New Yorkers would tune in to webcasts. The Campaign Finance Board says nearly 3,000 viewers have logged in to watch meetings on its webcast since 2011. By comparison, the state Department of State posts its meeting videos on YouTube and last year attracted a range of 11 to 119 views.

Such low numbers of viewers might not reflect the impact of posting the videos online, said Rachel Fauss, research & policy manager for the Citizens Union. For example, a single viewing by a journalist or blogger could spark a story in a newspaper or website.

"The numbers, even though they may seem small, are actually much, much bigger in terms of the ultimate reach," she said.

Among those exempted from the webcast law are the city's 59 community boards. But the Council might change that.

A bill requiring community boards to live-stream meetings or post recordings online within 72 hours was introduced in January.

Manhattan Community Board 6 District Manager Craig Hammerman described the proposal as an "unfunded mandate" inflicted on cash-strapped boards and agencies.

"You can change the charter to mandate that community boards perform brain surgery, but you'd be setting us up to fail. It's unwise and unfair," he said.