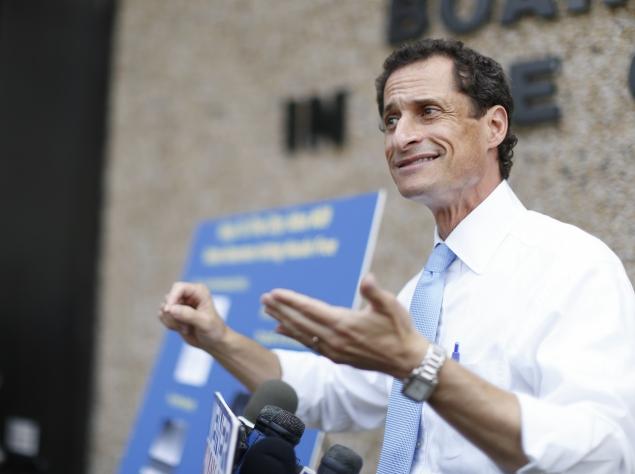 Anthony Weiner is a political columnist and commentator, a consultant and a family man. He is not, strangely, holding or running for elected office.

Having spent the vast majority of the past 23 years either in or seeking an elected position, Weiner, a former New York City Council Member (1992-1998) and congressman (1999-2011), finds himself on the fringe of the political discourse after coming up short in his second bid to become the mayor of his hometown.

The much-detailed scandal that ended Weiner's congressional career and derailed his 2013 mayoral bid seems to have contributed to a bull market for his thoughts on politics and policy. Weiner continues to be invited to cable news talk shows, has started writing a regular column in the Daily News, and after sitting down with me on Tuesday, dashed off to the NY1 studios to tape a "Wiseguys" segment for the "Inside City Hall" program.

His name continues to be an attention-grabber and his face, a head-turner – as I witnessed when he walked into the Manhattan coffee shop where we met. Dressed casually, Weiner bounded into the cafe, gave me an unhurried hello and firm handshake, and darted to grab a beverage before sitting down to chat. While he waited to order, several patrons recognized him; two women in line exchanged smirks and whispers.

Whatever you might think of Weiner, and opinions vary widely, there is no denying that he is interesting and engaging, and thus unlikely to drop out of the public eye any time soon. Not to mention that even if it is only by sheer will, the Brooklyn born Weiner is all but sure to remain part of the political conversation, despite his being a self-described "imperfect messenger."

When I asked Weiner what he has going on these days, other than the Daily News column, which had debuted two days before, he said, "I'm going to write the column. I don't know what else I'm going to do. I may choose one other outlet, maybe one of these news aggregator outlets, to do a little writing for."

He glanced out the window, perhaps deciding what to divulge, or looking for a deeper answer about his future plans.

"I've got something else I'm working on that I'm not prepared to discuss," he volunteered. "I'm doing some consulting with a health-care company here. I do a little consulting for, for the next stage of Obamacare, which is to implement it."

There it was again: health care, the topic that helped launch Weiner to national prominence three years before the sexting scandal led to his resignation.

It was on the floor of the U.S. House of Representatives that Weiner put together some of his most dramatic and to many, endearing moments, thundering away at Republican opposition to health care reform and benefits for 9/11 first-responders. A proponent then and now of a national, single-payer health care system, Weiner continues to get passionate when talking about the issue.

As he did on the 2013 mayoral campaign, Weiner returned to the topic of health care or used health care as an example throughout our conversation. I asked him about certain policy areas that fit the cross-section of topics he had focused on during his last campaign and those receiving minimal attention in the first few months of the de Blasio mayoralty.

Weiner and others have noted that much of the political air is getting sucked up by universal pre-K. And while the administration and the media are devoting some attention to policing and traffic safety, there are, as always, topics less discussed. So Weiner and I dug into a few.

"The federal government has to solve this flood insurance problem, but fast," Weiner said.

At the city level, he is willing to be patient with the new mayor.

"The mayor says he needs some time to get his hands around it," he said. "This is now going to be the third revamping of it. The money's not getting out. The mayor is learning, and what we learn...is you get caught in this Faustian vice, getting money out quickly and have the stories that people got it who maybe shouldn't have or the money's all gone and maybe your city didn't get it. You try to put these governmental checks in place that close the spigot so tight that nothing gets done. Finding that sweet spot is not so easy."

He concluded, "I honor the challenge that the mayor has, this is difficult stuff to do. He says 'give me some time,' the answer is yeah, give him some time."

On the teachers' union contract, I started by mentioning Weiner's mother, whom he often brought up when talking about education during this last campaign. Weiner's mother is retired, but taught for many years.

One of the funnier campaign trail anecdotes I remember from the perpetually witty and sarcastic Weiner was his response to a question about endorsements, particularly that of the United Federation of Teachers (UFT), which had gone to Bill Thompson in the Democratic primary. Weiner quipped that Thompson might have gotten the nod from the UFT, but that he, Weiner, had received the endorsement of at least one member – his mother Frances.

When I brought up the contract negotiations between the UFT and the city and made reference to the ongoing charter school debates, Weiner quickly changed the subject to health care costs.

I suggested that UFT would only agree to contribute to their health care costs in exchange for hefty retroactive raises and significant salary bumps moving forward. To which Weiner countered, "Finesse it by making the numbers relatively small."

Then he put the contract negotiations into perspective.

"The municipal unions in New York City are not only alone among the unions in the city. The non-municipal unions all pay a percentage of their health care, but they're almost alone of the municipal unions around the country," he said. "Look, I believe in a single-payer system, but I do believe that even small amounts that people have to pay, a dollar, two dollars, makes them better consumers, and so I think that it's ultimately going to happen."

With a nod to the fact that he has spoken about the issue of reigning in health care costs with regularity, he concluded, "I'm very gratified to see the mayor and his people are talking about it. His budget director talked about it in front of the city council. He's taking the right tone."

I noted that it didn't seem likely much else would change in the teachers' contract if a deal on health care contributions and pay raises was struck. Weiner disagreed.

"I've never had the belief that the path to education reform is blocked by the teachers' contract," he said. "I think that if you make a compelling case that you guys work an extra X number of hours and here's how we'll compensate you, or we want you to work in the summer and here's how we'll put up the air conditioning.

"Teachers are different. They're more like you now than they are like my mom. The day of the... 25-year senior teacher being the center of gravity in the teachers' union is gone away. Now they're basically younger teachers who want to innovate, who want a career ladder. I don't believe that (UFT President Michael) Mulgrew and his people are 'I want to stop reform.' Remember how long it's been since they've had anything resembling a partner in this."

Perhaps no audience responded as well to Weiner during last summer's mayoral forums as seniors. I recall two forums, one put on by the CSCS and the other by the AARP, that focused on aging issues. Both crowds were lively and cheered Weiner the loudest of any candidate as he did what he did throughout the campaign: spoke knowledgeably, humorously and passionately about the specific issues of importance to the audience in front of him.

"This is a great city to grow old in," he said Tuesday. "City aging ultimately means our health care economy, to some degree, benefits. We don't want them all to go to down to Florida or the Dominican Republic or Puerto Rico when they get older. It does come back to the health of the neighborhood shopping strip. They're still the people who want to go to the neighborhood flower shop, the neighborhood shoe store, the neighborhood pizzeria. They're under a lot of economic pressure as well."

Weiner then reiterated his call for the city to look at ways to encourage building new, smaller housing units for seniors, perhaps above or adjacent to a small senior center. This would help solve two problems, he argues: improving seniors' quality of life, and freeing up the larger housing units they are often renting – at below market rate, to boot.

"I'm a fairly pro-development Democrat," he said, perhaps drawing a distinction between himself and the mayor, who he thinks is "going to use the fulcrum of government as best he can" to ensure provisions for living wages and affordable housing in new development deals.

I asked if the mayor's demands will deter developers from the city, especially at a time where the cost of borrowing money is on the rise due to federal policy.

"There's an enormous amount being made on market-rate development right now or else so much of it wouldn't be happening," he responded. "And I think there's a lot of ways that you can use that for the public good. I think our tax policy is ass-backward on some of these things, and you can derive revenue from these super high-end condos that pay a city transfer tax that's the same if it's a $40,000 unit and a $40 million unit.

"Our real estate boom is a third driven by a combination of cheap money and no where else to put it; a third driven on relative insecurity in other places" like China and Russia, and a third driven by the fact "that New York City is a safer place, a cleaner place. The money is chasing it.

"The same thing is supporting the stock market, which is supporting New York's economy. We're doing okay, you know, cheap money is driving a lot. Real estate does disproportionately well when you're doing that."

An Itch to Scratch

"I still have an itch that I want to scratch," Weiner said. "There's still things that I think and I care about. It's not going to be the center of my life anymore and that's kind of liberating, too, you know, to be like a New Yorker who just says 'there oughta be a law' or 'that bum screwed this up,' read the paper like everyone else, it's kind of nice not to feel like I've got to have a policy position on everything."

In part two of our interview with Weiner, we discuss politics: what it means to be a "progressive," how mayors de Blasio, Bloomberg, and Giuliani differ in their styles, the upcoming 2014 mid-term congressional elections, and more.