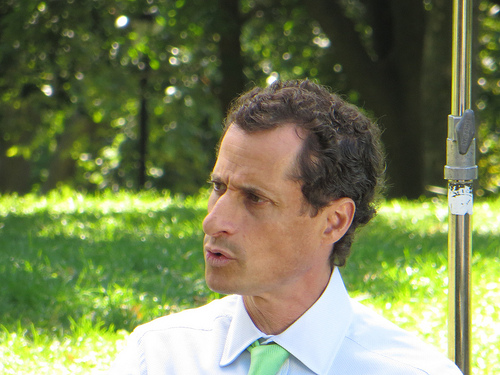 When Anthony Weiner talks policy or politics – or sports or restaurants or anything else, I imagine – he speaks authoritatively. He speaks confidently, as if he's researched and thought through his positions so well that they are foolproof and should be common sense to the listener. As has been clear, he presents as alpha and tends toward pugilism.

When you're seeking votes, it's an effective style much of the time. Those pursuing elected office, especially an executive role, must convince people of their leadership. It can be quite visceral. Mix Weiner's aggressive style with a strong grasp of data and detail, a quick wit, and good articulation, the combination leads to winning over a lot of voters.

During the summer of 2013, I saw Weiner win many rooms full of New Yorkers amid his second bid to become mayor of New York. Weiner cannonballed into the race in late May and for the next two months was at or near the top of the polls in a crowded Democratic field – until it all came crashing down due to new revelations about his prior lewd online behavior.

For most of June and July, and even beyond, Weiner was the strongest retail politician in the running – he appeared at the parade of candidate forums, but unlike his rivals, he stood every time it was his turn to speak (and the microphone logistics allowed). Virtually every time he rose, it was as if the audience was reawakened from the slumber that can come from hearing four, five, six politicians give almost identical consecutive answers to a question – and without much punch.

Weiner stood, spoke quickly, loudly, and clearly, gesticulated, made jokes, and got serious and deep on specific, relevant policies; he connected with his audience time and again.

As the one candidate who had played on a national stage, Weiner regularly showed his considerable political talent. At times, of course, he also showed the volatility of the aggressor, the snarl of the alpha.

Then and now, Weiner seems convinced that the combination of good ideas and strong personality is the key to political success.

After he and I discussed a variety of policy issues on Tuesday, we talked politics, ranging from local to national:

On New York City and progressivism

Political success is almost all about "giving New Yorkers a sense that you're fighting for them," Weiner told me. "I've always had this thing about politics: people care a little bit about what your ideas are, they do."

What they really connect with, he believes, is "this general sense...'that guy kind of gets me and what I'm going through.' They don't necessarily care that you got this payroll tax or that." They want to identify empathy, feel as though you are knee-deep in the struggles of life with them, he believes.

I noted that this sense of voter-candidate identification seems to have catapulted Bill de Blasio into the mayoralty around issues such as affordability, race, education, and hospitals.

"The general frame that the mayor laid out that animates him [is] this notion of income inequality, there's an enormous amount of need in the city," Weiner said.

De Blasio was also apt to identify the desire of many New Yorkers that their city become "a place where people feel a better connection to their government than perhaps they did during the Bloomberg years," he said.

"I think that what I watch for in Mayor de Blasio is these two things about him: one, he has a very strong ideological sense about how he wants things to look like in his world, that's where 'the progressive thing' is; and two, he's a lifelong political tactician. He's a politician, so how those things work together in making the city run is a fascinating thing.

"Bloomberg as the contrast, completely non-ideological, entirely 'I'm this tactician guy.' So he governed everything that he did and governed the way he wanted us to look at him.

"Giuliani was mostly an ideological guy, 'I'm going to get this thing wrestled to the ground,' and that he wasn't very good on the tactical side wound up undoing himself – he just wound up looking like a jerk.

"I hope that [de Blasio] can show that progressives can be good, smart, tactical, 'block and tackle' administrators," he said.

I reminded him he had written "progressives like me" in his Daily News column, to which he laughed and said, "Fair enough. I mean, I don't know. I would have this argument all the time in Washington when people used to say that single payer was this wacko liberal position, and I would say it's cheaper, it requires less infrastructure." It was pragmatic and everyone should want it, he implied.

"I never used that language in the campaign, as you know," he continued. "I think its not unifying language, it means different things to different people."

He countered my noting that some people define "progressive" as an activist form of government with, "No, not when it comes to a woman's right to choose it's not.

"I think too often we Democrats and we liberals and we progressives, whatever you're going to call us, allow the language of the debate to be stolen from us," he said, becoming even more animated.

He cited the example of wearing an American flag pin on his lapel and having Democratic voters tell him that it was a Republican thing to do. Incredulously, rhetorically, he asked, "When did they get the flag? When did that happen?"

He continued: "I don't know what these words mean. Let me ask you a question. Is stopping 200,000 or 400,000 New Yorkers who didn't commit any crime, who you don't write a (NYPD form UF) 250 for, who weren't arrested, is doing that a conservative way to fight crime? I don't know. I gotta tell you, you speak to Libertarians and they'd probably say, 'no, I don't want government stopping me when I walk down the street, that's a bad thing.'"

On Albany and political capital

"I have a macro sense that it's a good place for the mayor to be, fighting for more control of our destiny," Weiner said. "Especially now that the governor is being so bombastic and unnecessarily confrontational about this stuff. He's kind of making the case for us. He's almost sounding paternalistic, playing right into the argument that many of us make that you know, you don't necessarily have all the answers, let us try a few."

"It's not finite, it can be regenerated," he answered. "If you're good, you figure out a way to become popular and take advantage." Weiner continues to argue that the mayor of New York seeking to wrest more power from "dysfunctional" Albany is the right tact.

On dysfunctional Washington, national politics and the media

With mid-term congressional elections on the 2014 horizon, I asked Weiner what he thinks might happen.

"When the government shutdown was going on I would have said, 'oh the Republicans are going to hemorrhage 70 seats over this,'" he said. "Now, Democrats...the Obamacare website crashes and I'm like 'this is the end of the world.' I don't know. I can tell you this, nothing's getting done in Washington. I stay in touch with some of my colleagues there, it's just a tough place to be."

Pointing to the Tea Party, without naming it, he continued, "If you look at today and you realize that no one could have conceived that 10 percent of the population that is so animated by having nothing happen would basically hold all the cards in this system that's been set up," he said in reference to congress and federal checks and balances.

"We've empowered a relatively small number of Americans represented by a relatively small number of representatives, backed up by a surgical echo chamber of the media that you can do anything, that Michele Bachmann on one side and Anthony Weiner on the other can do anything and have 30,000 Twitter followers say 'go get em', you know, whether it's me trying to get Clarence Thomas to recuse himself from cases because his wife took a bunch of money from lobbyists or Michele Bachmann saying something crazy.

"And combine that with computer-driven redistricting," he continued, and "you've got the Henry Waxmans and the John Dingles and the George Millers of the world asking 'why am I investing 20 years in Congress to be a master legislator, for what?'

"And you, and you – and now you're in this business so I can say it – and you bozos write stories like the New York Times writes that Weiner's only passed one law. We passed like ten laws my entire time I was there! It's like 'one law,' yes!, I'm not the chair of the appropriations committee, so I have 92 things I got inserted into laws, but no, 'only one law,' so its like, 'why bother?'

"That's one of the reasons why I think that President Obama is doing a damn good job as President," Weiner said in conclusion, not at all sounding like someone nearly done with politics, "because every day he gets up in the morning and says 'I'm dealt this crummy hand, I'm going to try to get the best possible deal for the American people. I got Weiner on one side kicking my ass, I got Bachmann on the other side kicking my ass, I've got Ben who won't give me a moment's breathing room before he's telling me what my poll numbers say, you know, I'm just going to try to do the best I can.'"

Revisit part one of our interview with Weiner, in which the former congressman discuss city policy, including health-care, Sandy recovery, the teachers' union contract, seniors, and development.